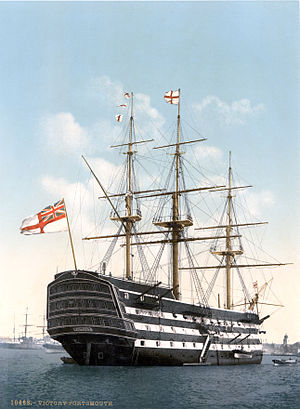 HMS Victory was built from 5500 oaks

Demand for timber to construct British naval vessels in the 1800s and earlier seriously depleted the country’s forests. Some estimates say that England’s woodlands shrunk from an estimated land coverage of 15% in 1086, England’s forests and woods had dwindled to just 5.2% by 1905.

Fortunately thanks to the steel industry, our forest cover is back to 13%.

However, it might not be for long if the eco-loons get their way: 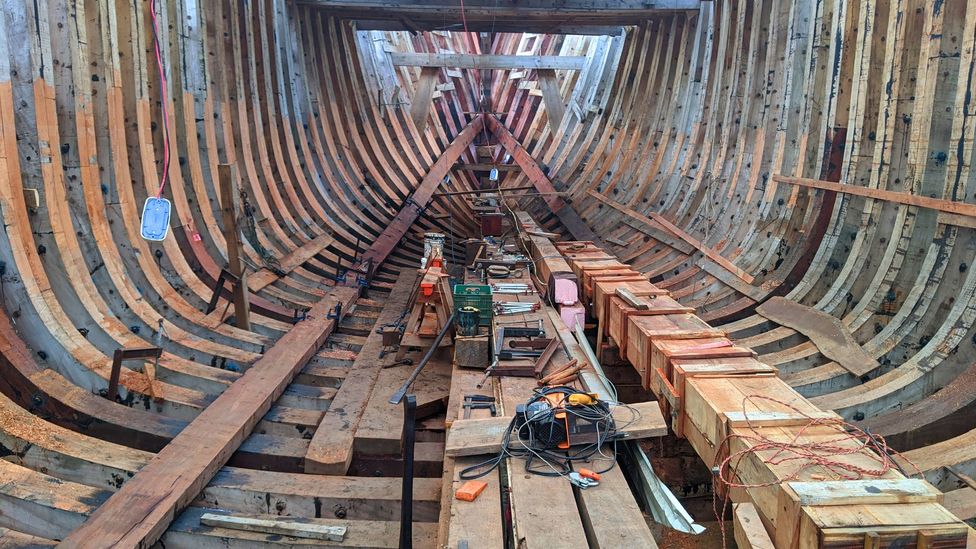 The shipping industry’s climate impact is large and growing, but a team in Costa Rica is making way for a clean shipping revolution with a cargo ship made of wood.

In a small, rustic shipyard on the Pacific coast of Costa Rica, a small team is building what they say will be the world’s largest ocean-going clean cargo ship.

Ceiba is the first vessel built by Sailcargo, a company trying to prove that zero-carbon shipping is possible, and commercially viable. Made largely of timber, Ceiba combines both very old and very new technology: sailing masts stand alongside solar panels, a uniquely designed electric engine and batteries. Once on the water, she will be capable of crossing oceans entirely without the use of fossil fuels.

“The thing that sets Ceiba apart is the fact that she’ll have one of the largest marine electric engines of her kind in the world,” Danielle Doggett, managing director and cofounder of Sailcargo, tells me as we shelter from the hot sun below her treehouse office at the shipyard. The system also has the means to capture energy from underwater propellers as well as solar power, so electricity will be available for the engine when needed. “Really, the only restrictions on how long she can stay at sea is water and food on board for the crew.”….

With the hull and sail design based on a trading schooner built in the Åland Islands, Finland, in 1906, from the horizon Ceiba will have the appearance of a classic turn-of-the-century vessel, when the last commercial sail-powered ships were made. “They represented the peak of working sail technology, before fossil fuel came in and cut them off at the ankles,” says Doggett. Sailcargo also plans to explore the use of more modern sail technology, she adds, such as that used in yachts, in its future boats.

For her builders, one of the ship’s main attractions is to provide a much-needed burst of (clean) energy in an industry long dragging its heels on climate. The global shipping sector emitted just over a billion tonnes of greenhouse gases in 2018, equivalent to around 3% of global emissions – a level that exceeds the climate impact of Germany’s entire economy…..

Ceiba is small for a cargo ship – tiny in fact. She will carry around nine standard shipping containers. The largest conventional container ships today carry more than 20,000 containers.

She is also relatively slow. Large container ships typically travel at between 16 and 22 knots (18-25 mph/30-41 kph), according to Gilliam. Ceiba is expected to be able to reach 16 knots at her fastest, says Doggett, and easily attain 12 knots, although the team has conservatively estimated an average of 4 knots for trips until they can test her on the water. She will likely be significantly faster than existing smaller sail cargo ships that don’t have the added benefit of an electric engine….

Sailcargo’s focus on a holistic, truly circular system of shipbuilding may be praiseworthy, but for now it really is just a drop in the ocean. As pressure builds on the shipping industry to act on climate change however, projects like this could both offer an alternative to conventional shipping and help to influence the mainstream industry.

After a day spent at the shipyard watching Ceiba being built, I ask Lynx Guimond, another co-founder of Sailcargo, what he thinks is really needed to cut the shipping industry’s sizeable emissions. Perhaps surprisingly for someone in the middle of building a ship, he tells me that one of the solutions is simply less shipping. “At the end of the day we just need to transport less stuff.”

So, let’s get this straight. You would need more than 2000 of these wooden ships to replace one conventional container ship. And it would travel at a quarter of the speed.

And for that, the BBC think it’s a good idea to cut down millions of trees!