There have been some pretty absurd articles in the Telegraph lately concerning all things green, but this one must be in the running for the Dross of the Year Award! 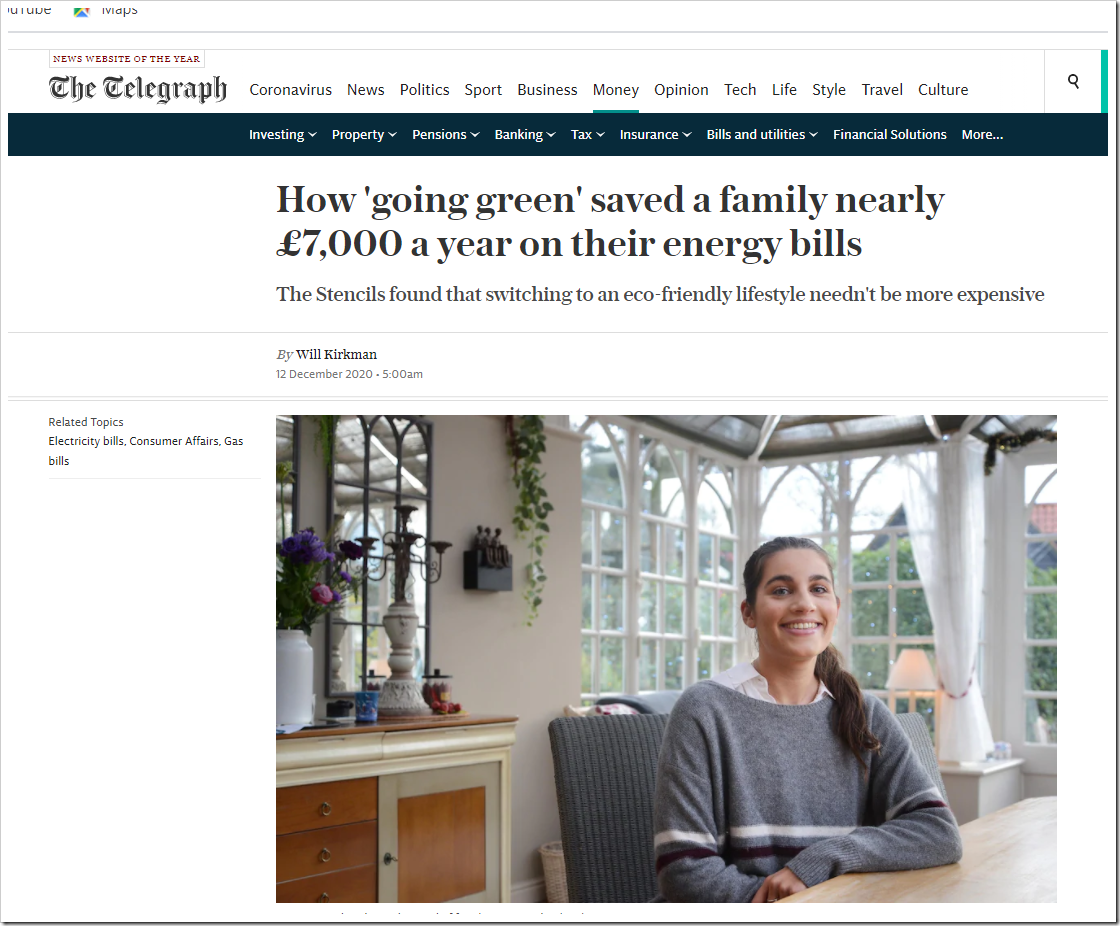 The swarms of young people moving back home during coronavirus lockdowns will have left many parents paying higher household bills.

One exception to this is the family of 24-year-old Grace Stencil, from Bury St Edmunds, Suffolk, who helped her parents save more than £7,000 a year on their bills by switching to an eco-friendly lifestyle.

Ms Stencil, who runs her own company selling CBD-infused products, moved in with her parents when lockdown struck and quickly realised that they were spending far more on energy bills than they needed to.

When her parents received a monthly energy bill of £713, equivalent to £8,556 a year, she set about looking for ways to cut costs – and their carbon footprint.

“My mum mentioned in passing how much they were paying. Over the years, we’d had a pool put in, which costs a lot to heat, and started heating our conservatory in the winter. Things just started adding up,” Ms Stencil said.

“I thought the cost was absurd. So, we all sat down together and went through the changes we could make.”

While the aim was to save money, Ms Stencil was also keen to nudge her family towards a greener lifestyle.

After trawling a price comparison website, the family found they could cut their energy bill by £4,380 a year by switching from their old supplier’s expensive Economy 7 tariff to a cheaper deal with Pure Planet, a renewable energy supplier, while at the same time cutting their carbon dioxide emissions to zero.

Ms Stencil’s father, who commuted less during lockdown, also decided to sell the family’s petrol-powered Jaguar and switch to an electric Tesla, which they expect to reduce their running costs by more than £1,800 a year.

Ms Stencil said: “My dad has always liked cars and thought he would save money in the long run by switching to electric. As he wasn’t travelling to London too much during the lockdown, it was a convenient option.”

On top of switching energy supplier and swapping petrol for electric, the family decided to convert the Aga from an oil-burning model to an electric one, saving them around £1,680 a year.

They also installed a better swimming pool cover to reduce heat loss by 85pc and cut running costs by a third, saving £780 a year. In their mission to go green, the Stencils even replaced their lightbulbs with more efficient LED versions. “Once we got going, we just thought, ‘we are on a roll’,” Ms Stencil said.

Without taking into account the cost or savings of the new Tesla, the family spent a total of £2,800 on home improvements, which they should recoup through energy bill savings in roughly four months. Including the outlay for the Tesla Model X, it would take just over five years to make up for the expenditure with savings.

There is plenty of research suggesting that most people would like to be more environmentally friendly, but according to the Pure Planet People & Power Report, 81pc of adults admit they could do more to be sustainable at home. The survey found that almost two thirds of the public think it is more expensive to lead a sustainable lifestyle, while only 5pc think it is cheaper to be green.

Almost a third of 18-to-35-year-old said they could not afford to be more sustainable, compared to one-in-five over-55s.

Ms Stencil added: “There are so many statistics coming out on how we’re ruining the world, and I think every little helps. If everyone does their part, it’s going to make an impact.

“I recommend going green completely – it really wasn’t difficult. “Our life hasn’t changed dramatically. It took a maximum of four hours for us to sit down and figure out what changes to make. The changes then happened within a week. Now we have better consciences.” And cheaper bills, too.

For a start, what normal family spends £7000 on energy every year, never mind saves that much. The “swimming pool” might have given the game away! In fact, the “house” concerned is a dirty great manor house. No doubt the sort of property that the Telegraph think we all live in.

And the Stencils did not save £7000 by “going green” – they saved it by using a price comparison website, which would have turned up multiple deals from a variety of companies at the same sort of price.

Incidentally, their old deal was Economy 7, which is aimed at getting customers to take advantage of lower prices at night. Unfortunately you pay through the nose for daytime usage with these deals!

As for the implication that green energy can be cheaper than other deals, this is only possible because renewable energy is subsidised by all energy users, meaning that it is sold on the market well below cost. Naturally, USwitch would love to attract more customers to use their website, because they get paid commission.

In fact, this whole story is no more than a puff piece for green energy suppliers and USwitch, something the Telegraph has neglected to mention.

As for young Ms Stencil, I hope she is not quite as gullible when she is running her company!

Needless to say, the author, Will Kirkman, is yet another of those wet behind the ears, young reporters, only a few years out of University.

Little wonder that the Telegraph has become such a joke.