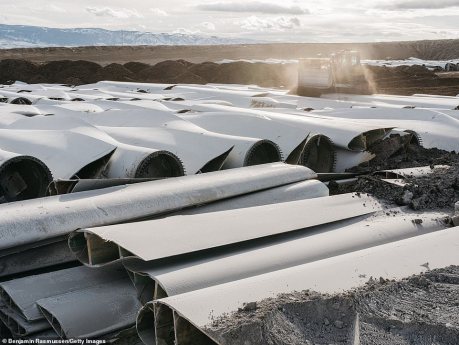 The rush to an all wind and sun powered future has left Germans sensing the kind of regret that comes with youthful exuberance – something about acting in haste and repenting at leisure springs to mind.

Having carpeted Deutschland with more than 30,000 of these things over the last 20 years, many of them are at the end of their serviceable life and a ‘green’ conundrum has arisen: what to do with all the toxic junk left behind.

No Tricks Zone reports on another green disaster in the making.

Germany began installing wind turbines in earnest some 20 years ago. Now that their lifetime has been exceeded, many are being ripped down. But there’s a big problem about what to do with the leftover carbon and glass-fibre reinforced blades.

A recent report on ZDF German public television explains that currently there’s no plan in place on what to do with the turbine blades, which weigh up to 15 tonnes each.

There’s no way to recycle them to use as raw material for new blades. Currently the old blades are being shredded and the chips mixed in with concrete. “You need too much energy and power to shred them,” says Hans-Dieter Wilcken, the operator of a German recycling company.

Burning them is also not an option.

Hazardous waste
The problem with chopping them up is that dangerous carbon fibre particles are produced and pose a threat to human health. Used wind turbine blades have been designated hazardous waste and no one knows how to deal with them.

Currently 30,000 wind turbines are in operation across Germany and many will have to be dismantled over the next 20 years. That volume alone means over a million tonnes of hazardous waste (30,000 turbines x 3 blades/turbine x 15 tonnes/blade = 1.35 million tonnes).

By 2100, with wind turbine use expected to rise, millions of tonnes of non-recyclable hazardous waste will be left for future generations to deal with – that’s in Germany alone.

‘The wind turbine blade will be there, ultimately, forever,’ said Bob Cappadona, chief operating officer for the North American unit of Paris-based Veolia Environnement SA, which is searching for better ways to deal with the massive waste. ‘Most landfills are considered a dry tomb.’

‘The last thing we want to do is create even more environmental challenges.’

On top of the hazardous wind turbine blade waste, there’s also the problem of the massive steel reinforced turbine foundations, which are simply being swept under a layer of dirt as well. These too will forever have an impact on soil and ground water.

Legacy of waste, breathtaking stupidity
Future generations will wonder how dumb their ancestors must have been to opt for a form of energy that blighted the landscape, destroyed ecosystems over vast areas, killed avian wildlife, was an unreliable and expensive energy source, made nearby residents sick and left millions and millions of tonnes of waste behind.

Never mind all the solar panel waste that is about to added to that.
No Tricks Zone 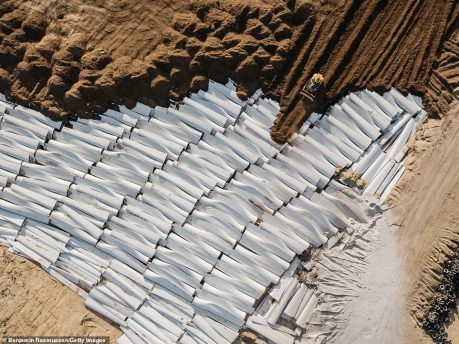