The Telegraph have prostituted themselves with this latest advertising feature, written by the eco-loon. Jonathon Porrit:

There are many reasons why young people today may feel they’ve got the short end of the intergenerational straw. But today’s climate emergency provides the starkest – and most morally reprehensible – justification for any potential grievances that young people may have.

Consider for a moment two disconnected data points regarding the year 2100. The projected life expectancy of a 10-year-old girl in the UK today is 90, predicts the Office for National Statistics. So a very significant number of them will still be alive in 2100.

According to the Intergovernmental Panel on Climate Change, average sea levels will have risen by no less than a metre by 2100. That’s the best case. You probably don’t want to think too much about the worst case. That’s still 80 years away.

Climate change is already ravaging the lives of hundreds of millions of people around the planet. We all know 2020 has been a terrible year – and that’s not just because of Covid-19. 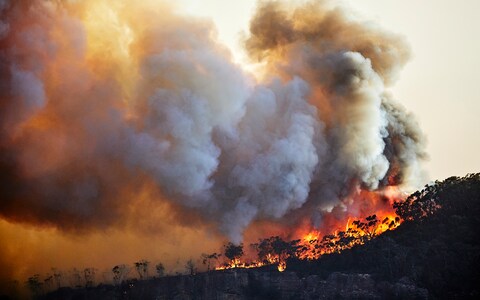 Unprecedented wildfires in Australia, California, Oregon, Brazil, even the Arctic Circle. Appalling flooding in China, India and Bangladesh. The worst-ever hurricane season in the Atlantic. The second worst year on record for melting Arctic sea ice. I could go on. The disasters, assuredly, will be on a rising scale, not just to 2100 but well into the next century. And if we continue to do next to nothing about it, it will be a great deal worse.

This is the backdrop to the rising anger of so many young people. At the UN’s Climate Action Summit in 2019, Swedish activist Greta Thunberg expressed this as follows: “You have stolen my dreams and my childhood with your empty words. For more than 30 years, the science has been crystal-clear. How dare you continue to look away, and come here saying that you’re doing enough when the politics and solutions needed are still nowhere in sight. You are failing us. But young people are starting to understand your betrayal.”

The disasters will be on a rising scale and if we continue to do next to nothing about it, it will be a great deal worseJonathon Porritt

I saw that as the first salvo in what I believe will become a long-drawn-out cry of intergenerational rage. That phenomenon will become one of the most significant factors in the climate debate – not least as that kind of rage will be so important in sustaining young people’s hopes.

When schoolchildren go on strike, this itself is a form of civil disobedience. And why would anyone think that the experience of disobedience at this young age will not turn into more engaged patterns of disobedience as young people make their way in a world increasingly disrupted by climate change?

And why would we, their parents and grandparents, not be standing alongside them at that point?

The Power of Us

Building greater, more sustainable economic growth can improve the lives of everyone in the UK.
This is the goal of inclusive capitalism: using money and investment as a force for good, to create real jobs and better infrastructure to transform the UK’s cities and towns and tackle the biggest issues of our times such as housing, climate change and ageing demographics.

It’s something businesses, communities and individuals can all get behind and work together to achieve – and it’s why Telegraph Spark has teamed up with Legal & General for The Power of Us, a campaign that aims to identify the challenges facing society, then use some of the UK’s brightest, most innovative thinkers to help solve them.
The Power of Us: the future is in your hands.

How utterly absurd! The world is in far better shape than it has ever been.

Life expectancy has doubled throughout the world in the last century:

Deaths resulting from famine has dropped to record low levels:

Crop yields have rocketed since the 1960s:

Contrary to the misleading impression put out by the Lancet, deaths from malaria are much lower than they were, even as recently as 2000:

In richer countries, contrary to popular narrative, outdoor air pollution has fallen sharply since the 1970s:

And thanks to economic growth, the number of people in extreme poverty across the world has plummeted. The only exception is Sub-Saharan Africa, which has been left behind in the growth game:

And last but not least, most of the world can now read and write, for the first time in history.

These are all things of which we should be immensely proud. And they have all been made possible by modern economic society, itself based on fossil fuels and all of the other things Jonathon Porritt seems to despise.

Children these days would be horrified if they had to grow up in the conditions of 50 or 100 years ago. But the younger generation has always been idealistic, untinged by reality.

Like we did, they will eventually grow up. It seems Porritt never did though.

As for the increasingly woke Telegraph, shame on them for taking the money to promote this nonsense.