Well, some of us have been warning about this for years: 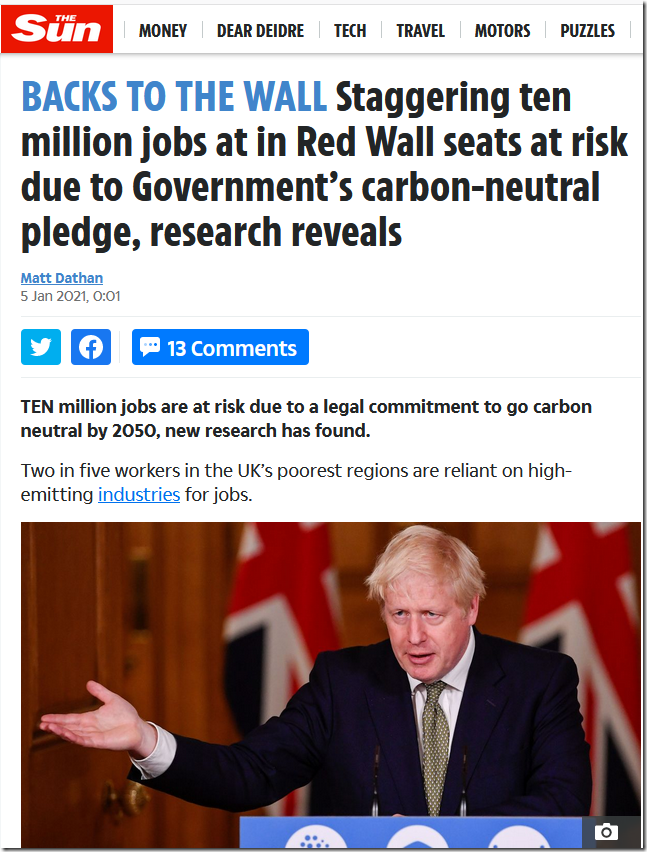 It is a bit rich for Caroline Spelman and Caroline Flint to be raising the alarm now. Neither objected to the Climate Change Act and its consequences, despite being in strong positions to in the past. On the contrary they have both vigorously supported it throughout.

Spelman was, of course, Environment Secretary from 2010 to 2012, during which time she absurdly warned us that drought would be the new norm in the UK. Meanwhile Flint held various ministerial positions under Blair and Brown, before being Shadow Energy Secretary under Ed Miliband.

I am afraid they have left this warning far too late now.

This is what the Onward report actually states:

And this highlights the very real problem – the climate change agenda is being driven by the metropolitan liberal consensus in London, where few jobs will be at risk.

Outside of London there is little support for Net Zero, but people there have little say in policy decisions. Polling may suggest otherwise, but the public have been deliberately kept in the dark about the real costs and implications involved.

As the  report makes absolutely clear, all major parties have exactly the same policies, so voters are not even allowed a choice come election time.

And, of course, it is not just Parliament. The media, civil service, quangocracy and the establishment in general have all conspired to exclude the public from any role in policy making.

There is talk of lots of green jobs being created, even though experience tells us that you cannot create jobs by government diktat, and that more jobs usually get lost as a consequence in the rest of the economy.

But even if these new jobs come about, this will be of little consequence for those losing their jobs, or the communities left behind. Try telling a well paid, highly skilled auto worker in the Midlands, that he will have to relocate to Essex to fit double glazing, or to the Scottish Highlands to plant trees.

The two Carolines finish by writing that the UK will once again be “leading the way”, in the run up to COP26. This of course is exactly what Ed Miliband’s Climate Change Act promised in 2008.

The rest of the world ignored us then, just as it will ignore us again.