According to Deutsche Bank: EU Green Deal can only succeed with “a certain degree of eco-dictatorship”

A senior economist at Deutsche Bank warns that for the EU’s Green Deal to succeed, “a certain degree of eco-dictatorship will be necessary”

An analysis published by Deutsche Bank sharply criticises the “dishonest debate” with which the EU is selling its “Green Deal” to the people of Europe. The massive risks of the project for prosperity, the economic system and democracy itself should not be concealed, but should be addressed openly.

Eric Heymann, a senior economist at Deutsche Bank Research, warns that Europe’s Green Deal and its goal of climate neutrality by 2050 threatens a European mega-crisis, leading to “noticeable loss of welfare and jobs”. And he warns: It won’t work without “a certain degree of eco-dictatorship”.

The analyst describes it as dubious that the Green Deal is being touted across the board as “a new growth strategy” which would allow the EU to become a “fair and prosperous society.” While this may look good on paper, Heymann writes, in order to achieve carbon neutral by 2050, Europe’s economy and its entire political and legal systems will have to be changed fundamentally.

For the time being, the revolutionary consequences of the EU’s climate agenda for everyday life are “still relatively abstract” and for most households “still acceptable.” Soon, however, the path towards climate neutrality will require drastic interventions in the choice of means of transport, the size of housing, the means of heating, the possession of electronic consumer goods, as well as restrictions in the consumption of meat and tropical fruits.

And he warns these restrictions and infringements will inevitably trigger “massive political resistance.”

"Some parties will find arguments against strict climate protection policies if the latter lead to a significant increase in energy prices or to restrictions of personal freedom or ownership rights. And let us not fool ourselves: these parties will find voter support. At the EU level, there will be major conflicts about distribution, which may contribute to (further) divisions within the bloc. Are we ready to deal with this polarisation?"

( where are these parties in the UK, I hear you ask)

Below are excerpts of Eric Heymann’s analysis.


Climate neutrality: Are we ready for an honest discussion? 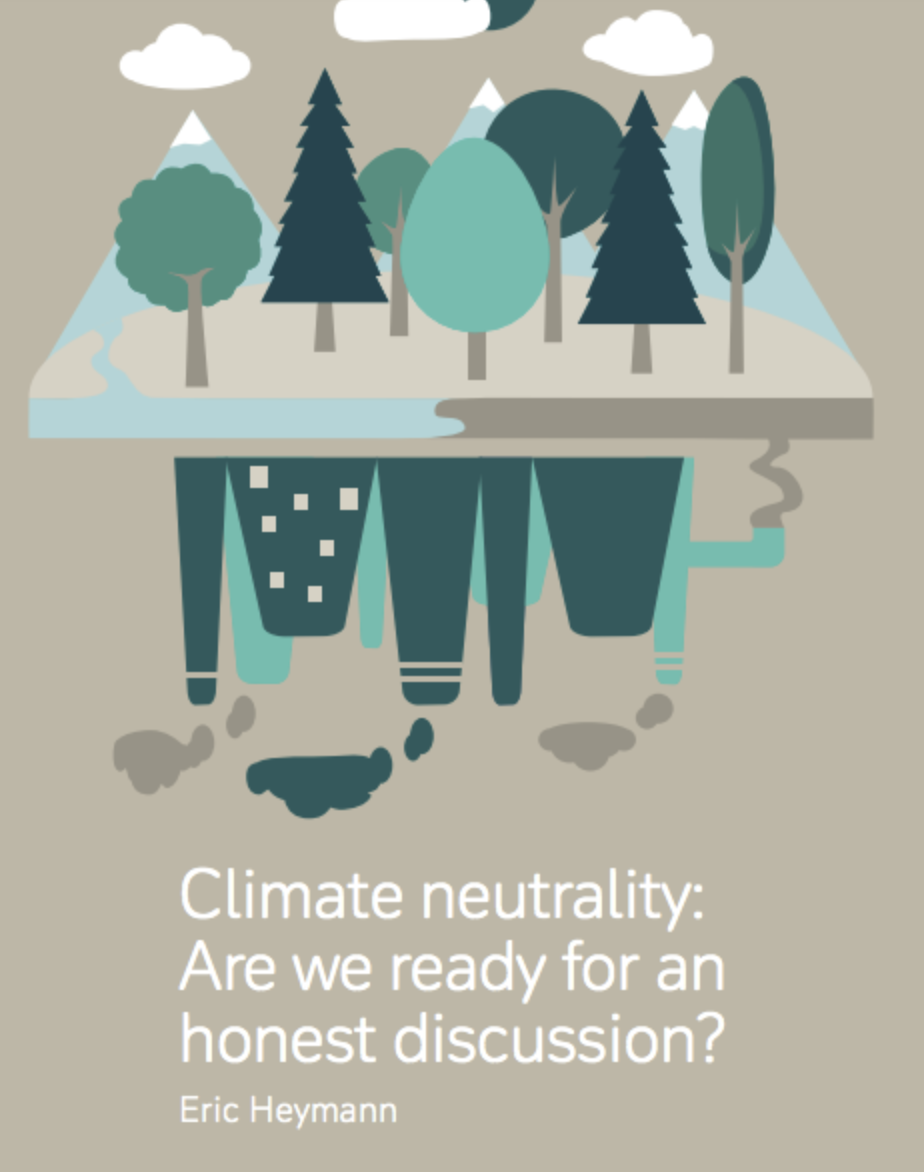 A certain degree of eco-dictatorship will be necessary

The impact of the current climate policy on people’s everyday lives is still quite abstract and acceptable for many households. Climate policy comes in the form of higher taxes and fees on energy, which make heating and mobility more expensive. Some countries have set minimum energy efficiency standards for buildings or similar rules in other areas. However, climate policy does not determine our lives. We take key consumption decisions, for example whether we travel at all, how much we travel and which means of transport we use, whether we live in a large house or a small apartment and how we heat our homes, how many electronic devices we have and how intensely we use them or how much meat and exotic fruit we eat. These decisions tend to be made on the basis of our income, not on climate considerations.

If we really want to achieve climate neutrality, we need to change our behaviour in all these areas of life. This is simply because there are no adequate cost-effective technologies yet to allow us to maintain our living standards in a carbon-neutral way. That means that carbon prices will have to rise considerably in order to nudge people to change their behaviour. Another (or perhaps supplementary) option is to tighten regulatory law considerably. I know that “ecodictatorship” is a nasty word. But we may have to ask ourselves the question whether and to what extent we may be willing to accept some kind of eco-dictatorship (in the form of regulatory law) in order to move towards climate neutrality. Here is an example: What should we do if property owners do not want to turn their houses into zero-emission buildings; if they do not have the financial means to do so; if doing so is not possible for technical reasons or if the related investments do not pay off?

Loss of competitiveness or restrictions to free trade

If the EU moves considerably more quickly towards climate neutrality than the rest of the world, carbon prices in the EU will rise more rapidly, too. This will reduce the competitiveness of energy-intensive companies in the EU. Are we willing to pay that price? Probably not – remember, nobody is to be left behind. So will we subsidise these companies to enable them to use expensive, but climate-friendly technology? This option will be difficult to implement in the long run due to budget constraints. An honest discussion will have to deal with the truth that each euro spent on climate protection is no longer available for expenses on education, research, public health, digital infrastructure, domestic and external security, tax cuts or higher pensions. The EU commission plans to introduce a carbon border adjustment system to address the competition problem. Do we really believe that doing so will not make the affected countries introduce countermeasures? Are we really willing to give up the advantages of free trade in favour of climate protection?

Nobody is to be left behind on the path towards climate neutrality. This statement from the Green Deal probably amounts to trying to square the circle. A major turnaround in climate policy will certainly produce losers among both households and corporates. In addition, prosperity and employment are likely to suffer considerably. If this was not the case, climate protection would be an easy undertaking. These developments will obviously have an impact on the political landscape, both at the national and EU level.

Some parties will find arguments against strict climate protection policies if the latter lead to a significant increase in energy prices or to restrictions of personal freedom or ownership rights. And let us not fool ourselves: these parties will find voter support. At the EU level, there will be major conflicts about distribution, which may contribute to (further) divisions within the bloc. Are we ready to deal with this polarisation? Or will we adjust our climate policy ambitions if we find that (overly) ambitious climate policies are not acceptable to a majority of the people?

The full analysis is available at  Deutsche Bank Research  (pp. 70-73)