As Orwell noted, the language of fear and panic is one of the main instruments of political control. 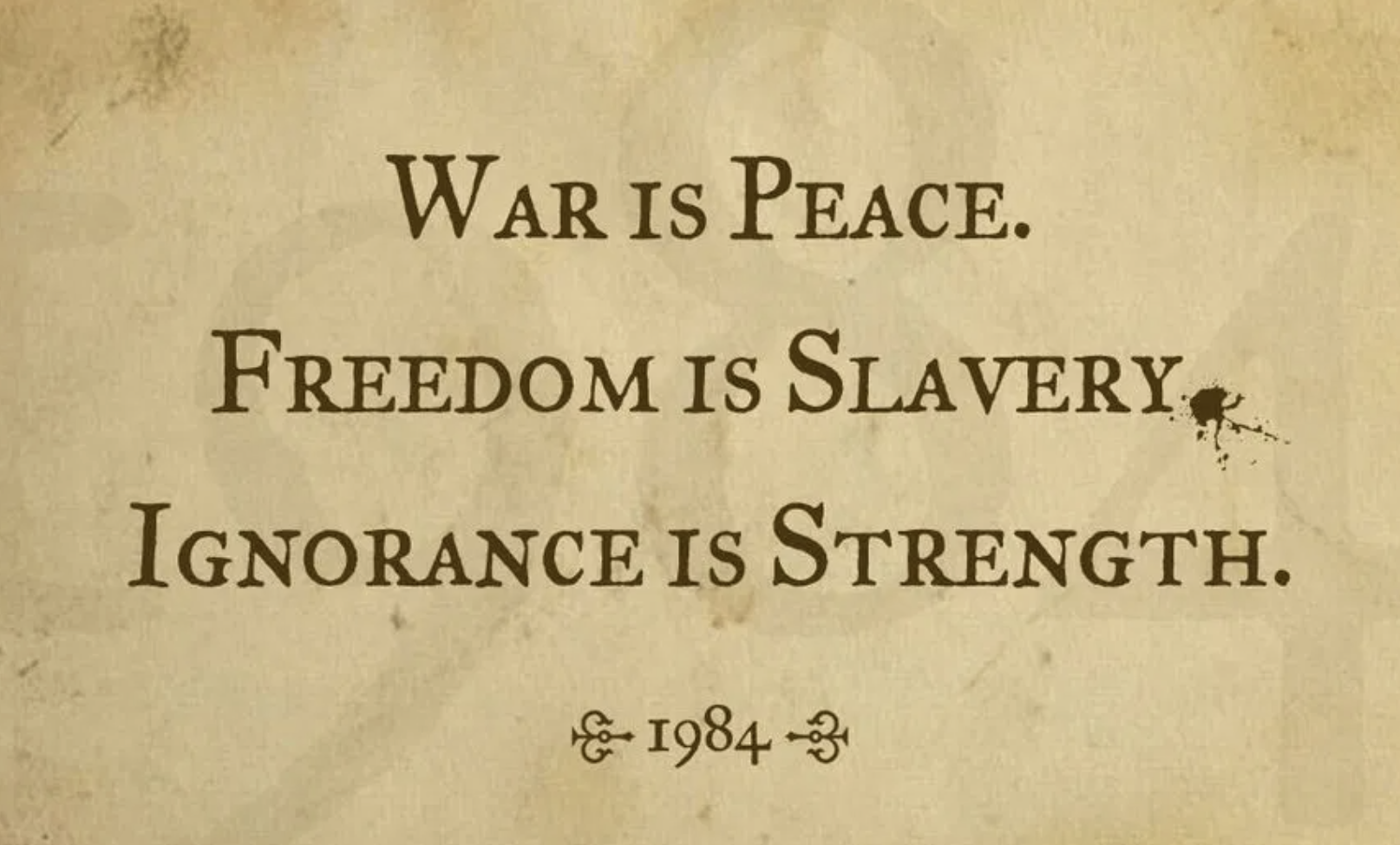 George Orwell pointed out that one of the first casualties of socialism is language. The damage is not collateral, it is deliberate — designed to numb minds and render critical thought difficult or impossible. The instrument of this dumbing down in Nineteen Eighty-Four was Newspeak, the official language of the English Socialist Party (Ingsoc).

Newspeak was a sort of Totalitarian Esperanto that sought gradually to diminish the range of what was thinkable by eliminating, contracting and manufacturing words. New words had a “political implication” and “were intended to impose a desirable mental attitude upon the person using them.” The meaning of words was often reversed, as was most starkly emphasized in the key slogans of Ingsoc:

Nineteen Eighty-Four was written in 1949. Its nightmarish fictional world is now 37 years in the past, so one might reasonably conclude that Orwell was far too pessimistic, but his great book was less a prediction than a warning, and above all an analysis of the totalitarian mentality.

Meanwhile, there is another significant date in Nineteen Eighty-Four. The book’s appendix on “The Principles of Newspeak” stressed that the corruption of language was a multi-generational project whose fruition would not come until well into the present century. Ingsoc’s objective was to render independent thought impossible by “about 2050.”

Intriguingly, that is the same year that the world allegedly has to become “carbon neutral,” or “net zero,” to avoid climate Armageddon.

The year 2050 has become a key date for the UN’s “Global Governance” agenda, which seeks nothing less than to oversee and regulate every aspect of life on the basis of a suite of alarmist projections. The main existential threat is claimed to be catastrophic man-made climate change.

“Climate Governance” has thus emerged as the “fourth pillar” of the UN’s mandate, joining Peace and Security, Development, and Human Rights.
So far — as with the other three pillars — the UN’s climate efforts have been spectacularly unsuccessful. It has held 25 enormous “Conferences of the Parties,” or COPs, which have promoted a morass of uncoordinated national policies that have had zero impact on the climate.

COP 21 in Paris in 2015, for instance, was meant to hatch a successor to the failed Kyoto Protocol. But all it produced was a raft of hypocritical, voluntary, fingers-crossed “Nationally Determined Contributions.” The failure of Paris, and of temperatures to rise in line with flawed models, led to a doubling down of “ambitions.” One new commitment that seeped out of Paris was for the countries of the world to hold temperatures to 1.5 degrees Celsius above levels before the Industrial Revolution (the original climate sin). Staying below that level, UN policy wonks rapidly calculated, would require the world to become carbon neutral, or net-zero, by 2050.

In a video lecture to Chinese students last year, UN Secretary-General António Guterres claimed that there was “no excuse” not to meet the net-zero emission target by 2050. “The time for small steps has passed,” he said. “What is needed now is transformational change.” For “transformational” read “revolutionary” — change that would involve the destruction of Western industrial society and freedom.

In fact, there is no climate “crisis” or “emergency.” However, as Orwell noted, the language of fear and panic is one of the main instruments of political control.

Today, just as in Nineteen Eighty-Four, the classical liberal concepts of liberty and equality (of opportunity) are under relentless attack, as are the values of reason and objectivity. Liberty and equality were classified in Newspeak as “Crimethink.” Objectivity and rationalism were “Oldthink.” A doomed Newspeak lexicographer named Syme tells the book’s equally doomed hero, Winston Smith, that even the party slogans will eventually become incomprehensible: “How could you have a slogan like ‘freedom is slavery’ when the concept of freedom has been abolished?”

Orwell was hardly the first observer to point to the political dangers of linguistic manipulation, which go back to discussions of sophistry in Plato. The great economist and philosopher Friedrich Hayek pointed in particular to the left’s use of “social.” He dubbed it a “weasel word” that not merely sucked meaning from words to which it was attached but often reversed meaning. Thus, by classical liberal standards, social democracy is undemocratic, social justice is unjust, and a social market economy is anti-market. We have a prime current example in the phrase “social licence to operate,” which in fact means a potential veto on corporate activities by radical environmental non-governmental organizations (ENGOs), the stormtroopers of the Global Governance agenda.

Private corporations were once socialism’s enemies; now they have been co-opted as its partners, agents of “Global Salvationism.” Nobel economist Milton Friedman pointed to the subversive, open-ended nature of “Corporate Social Responsibility,” where “responsibility” represents another weasel word. CSR’s purpose is to force corporate executives to abandon their responsibility to their shareholders in favour of an endless list of “stakeholder” demands.

Friedman has been regularly and ritually subjected to the Two Minutes Hate ever since. The most recent example was a collection of overwhelmingly condemnatory essays in the New York Times to commemorate the 50th anniversary of the publication of his essay on CSR. Typically, it grossly misrepresented Friedman and wrote off his alleged bottom line as “Greed is Good.”

The shackles of CSR have now been tightened by the concept of ESG (Environmental, Social, and corporate Governance). ESG is, like the neologisms of Newspeak, “intended to impose a desirable mental attitude” on executives, who often seem intellectually and morally defenceless in the face of NGO campaigns of lies and intimidation. Business schools certainly don’t appear to equip them to counter such assaults.

A Climate of Newspeak

Perhaps the most significant new weasel word to have emerged from the UN’s equivalent of the Ministry of Truth is “sustainable.” Commitment to sustainability is now mouthed by every politician, bureaucrat, marketing executive and media hack on Earth. It sounds so benign, so reasonable, but what it actually means is “bureaucratically controlled and NGO-enforced within a UN-based socialist agenda.” Like most aspects of socialism, it is based on incomprehension and/or hatred of the nature and function of market capitalism, not least because markets — which signal scarcity, reward economy and promote profitable innovation — are the only true source of sustainability.

Projected catastrophic man-made climate change was enthusiastically embraced by global socialism because it was — in the words of Nicholas Stern, who was ennobled for his manufacture of an egregiously skewed review of climate impacts for his political masters in the U.K. Labour Party — “the greatest market failure the world has ever seen.” The problem is that we haven’t actually seen it, except, that is, through the biased lens of “official” science and an alarmist crusading media.

Like “social,” “sustainable” tends to vitiate or reverse the meaning of words to which it is attached. Thus sustainable development is development retarded by top-down control, and whose effectiveness is further compromised by the insertion of a long list of cart-before-the-horse social policy objectives, from gender equity to “responsible consumption.”

Peter Foster is a Toronto-based journalist and the author of 10 books. A collection of his National Post columns, titled How Dare You!, was recently published by the Global Warming Policy Forum.  It can be purchased in hard copy or ebook from Amazon: UK – USA – Canada – Australia 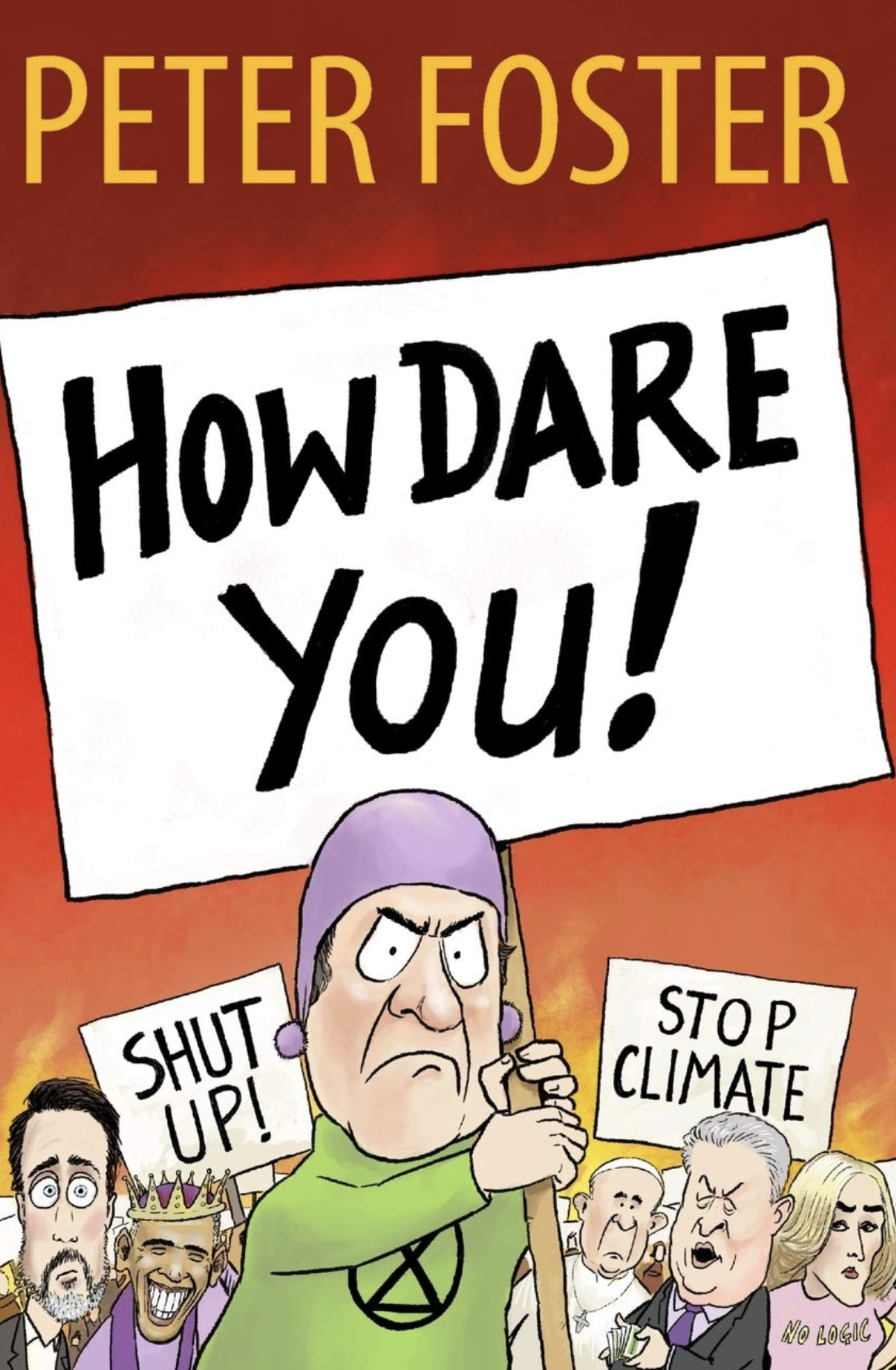