Cancel all the claims by climate activists that global warming is decimating Antarctica. A peer-reviewed study recently published in one of the most prominent science journals destroys one of the most frequently asserted claims by climate activists – that climate change is warming Antarctica and melting the Antarctic ice sheet. The recent study confirms Antarctica has not warmed in the past 70 years and Antarctic ice cover is expanding rather than shrinking.

Writing in the journal Nature, scientists at Columbia University and the University of Victoria, British Columbia report, “The Antarctic continent has not warmed in the last seven decades, despite a monotonic increase in the atmospheric concentration of greenhouse gases.”

The Antarctic continent has not warmed in the last seven decades, despite a monotonic increase in the atmospheric concentration of greenhouse gases. In this paper, we investigate whether the high orography of the Antarctic ice sheet (AIS) has helped delay warming over the continent. To that end, we contrast the Antarctic climate response to CO2-doubling with present-day orography to the response with a flattened AIS. To corroborate our findings, we perform this exercise with two different climate models. We find that, with a flattened AIS, CO2-doubling induces more latent heat transport toward the Antarctic continent, greater moisture convergence over the continent and, as a result, more surface-amplified condensational heating. Greater moisture convergence over the continent is made possible by flattening of moist isentropic surfaces, which decreases humidity gradients along the trajectories on which extratropical poleward moisture transport predominantly occurs, thereby enabling more moisture to reach the pole. Furthermore, the polar meridional cell disappears when the AIS is flattened, permitting greater CO2-forced warm temperature advection toward the Antarctic continent. Our results suggest that the high elevation of the present AIS plays a significant role in decreasing the susceptibility of the Antarctic continent to CO2-forced warming. 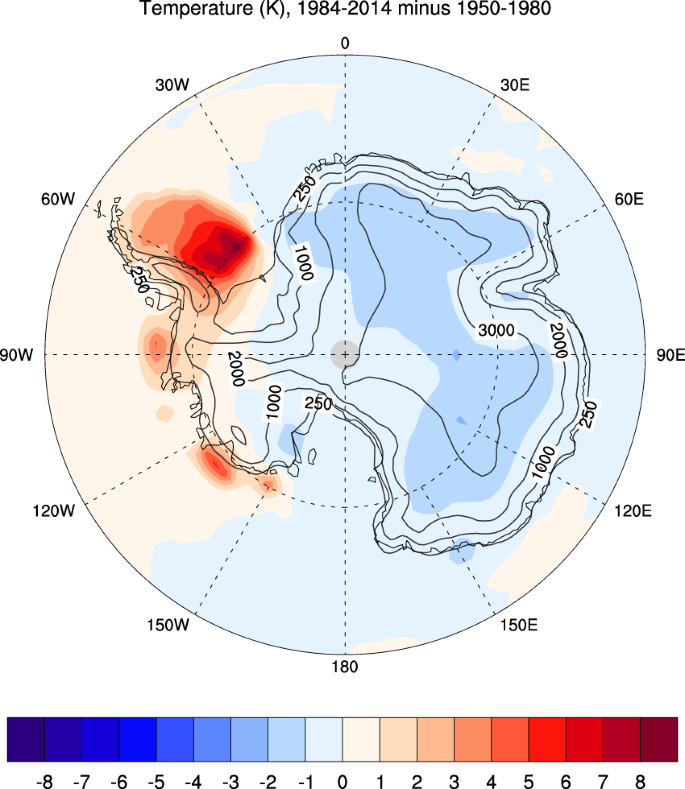 The only area of warming is around the Antarctic Peninsula, but even here temperatures stopped rising in the 1990s.