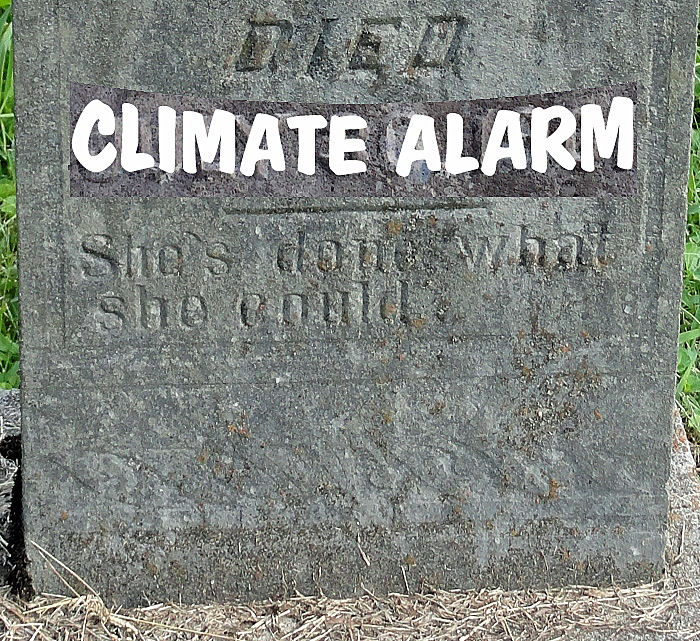 In 2020, more than 400 scientific papers were published that cast doubt on the position that anthropogenic CO2 emissions function as the climate’s fundamental control knob…or that otherwise serve to question the efficacy of climate models or the related “consensus” positions commonly endorsed by policymakers and mainstream media sources.

Over 400 scientific papers published in 2020 affirm the position that there are significant limitations and uncertainties inherent in our understanding of climate and climate changes, emphasizing that climate science is not settled.

N(1) Natural mechanisms play well more than a negligible role (as claimed by the IPCC) in the net changes in the climate system, which includes temperature variations, precipitation patterns, weather events, etc., and the influence of increased CO2 concentrations on climatic changes are less pronounced than currently imagined.

N(2) The warming/sea levels/glacier and sea ice retreat/precipitation extremes…experienced during the modern era are neither unprecedented or remarkable, nor do they fall outside the range of natural variability.

N(3) The computer climate models are neither reliable or consistently accurate, the uncertainty and error ranges are irreducible, and projections of future climate states (i.e., an intensification of the hydrological cycle) are not supported by observations and/or are little more than speculation.

N(4) Current emissions-mitigation policies, especially related to the advocacy for renewables, are often ineffective and even harmful to the environment, whereas elevated CO2 and a warmer climate provide unheralded benefits to the biosphere (i.e., a greener planet and enhanced crop yields, lower mortality with warming).

In sharp contrast to the above, the corresponding “consensus” positions that these papers do not support are:

A(1) Close to or over 100% (110%) of the warming since 1950 has been caused by increases in anthropogenic CO2 emissions, leaving natural attribution at something close to 0%.

A(2) Modern warming, glacier and sea ice recession, sea level rise, drought and hurricane intensities…are all occurring at unprecedentedly high and rapid rates, and the effects are globally synchronous (not just regional)…and thus dangerous consequences to the global biosphere and human civilizations loom in the near future as a consequence of anthropogenic influences.

A(3) The climate models are reliable and accurate, and the scientific understanding of the effects of both natural forcing factors (solar activity, clouds, water vapor, etc.) and CO2 concentration changes on climate is “settled enough”, which means that “the time for debate has ended”.

A(4) The proposed solutions to mitigate the dangerous consequences described in N(4) – namely, wind and solar expansion – are safe, effective, and environmentally-friendly.

To reiterate, the 400+ papers compiled in 2019 support the N(1)-N(4) positions, and they undermine or at least do not support the “consensus” A(1)-A(4) positions.  These papers do not do more than that.   In other words, it is too ambitious to claim these papers prove that anthropogenic global warming (AGW) positions are invalid, or that AGW claims have now been “debunked”.

Below are the two links to the list of scientific papers for 2020 as well as an outline to their categorization.

Below are a few samples of the papers contained in the database.

The clouds represent a key element within the terrestrial climate system. In fact, clouds may be the most important parameter controlling the radiation budget, and, hence, the Earth climate (Hughes, 1983). This is related to the fact that clouds have a paramount importance in the radiation balance at global scale, especially due to their albedo (Ohring and Clapp, 1980). … Chiacchio and Wild (2010) have shown that more positive NAO during 1985–2000 is linked with the increase of solar radiation in Europe due to lower amounts of cloud cover which are characteristic for the southern part of the continent during positive NAO. They showed that NAO, generally anticorrelated with cloud cover at continental scale, represents one of the most important drivers of changes in solar radiation in Europe. Sfîcă et al. (2017) found that higher values of sunshine duration during winter in Romania are linked with an intense westerly circulation at continental scale. This supports the idea that there is an important link between atmospheric circulation and cloud cover. The effect on surface radiation of the decrease in cloud cover adds to the observed decrease of the optical thickness of aerosols leading to the so‐called brightening period during the last decennia (Russak, 2009; Pfeifroth et al., 2018a). 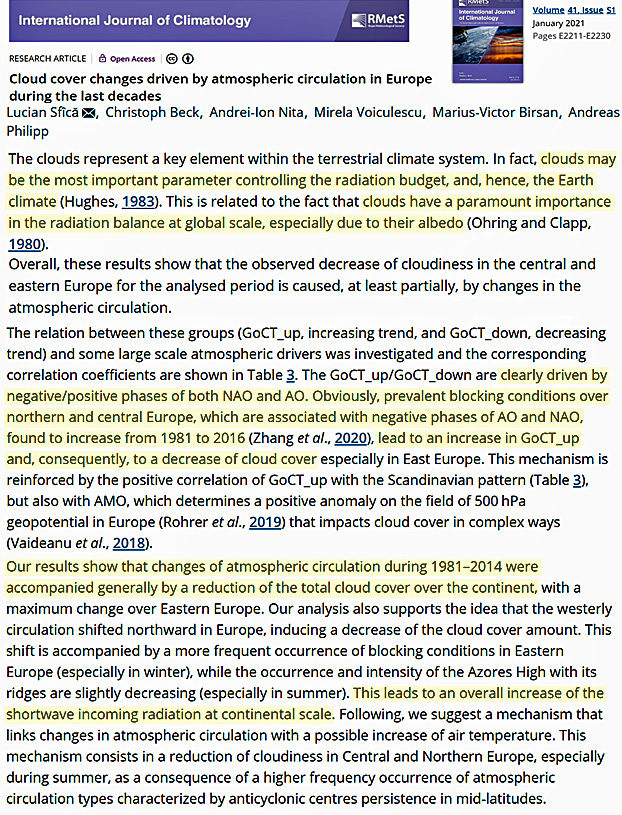 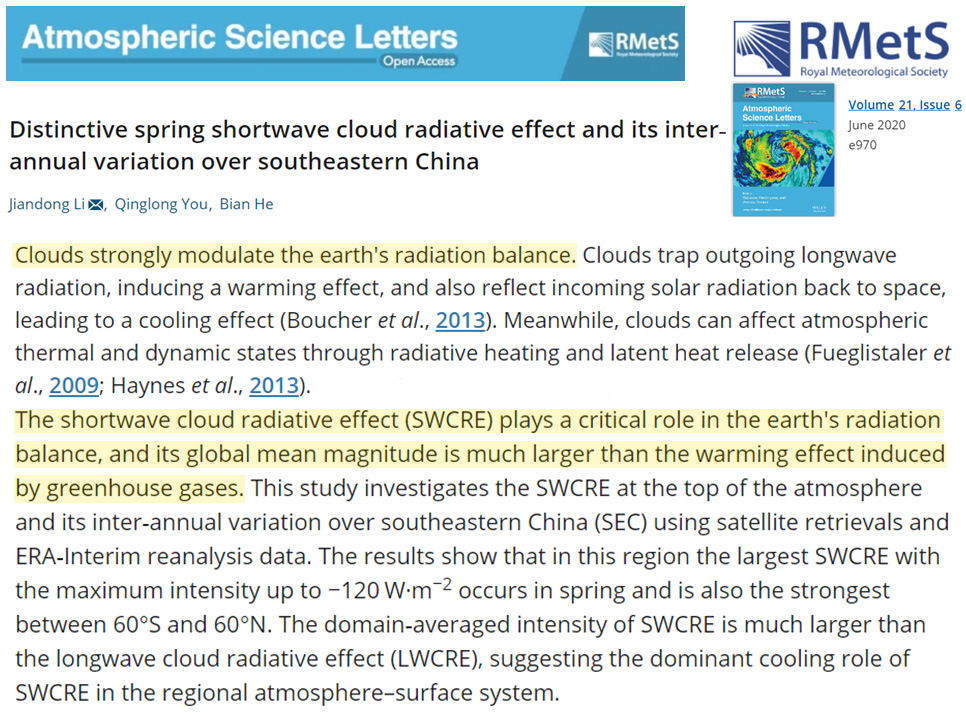 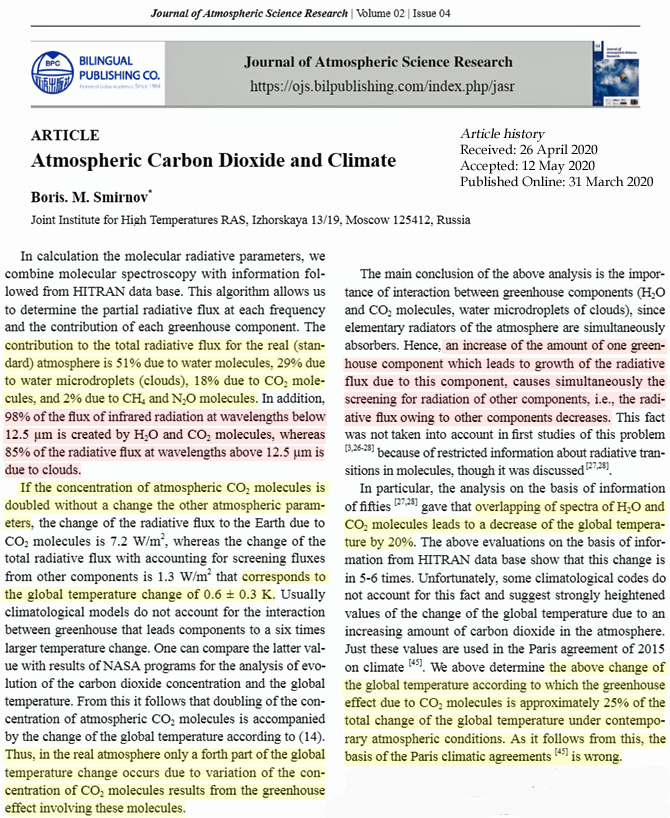 We examine the relationship of global temperature and atmospheric carbon dioxide concentration at the monthly time step, covering the time interval 1980–2019, in which reliable instrumental measurements are available. While both causality directions exist, the results of our study support the hypothesis that the dominant direction is T → CO2.  … For the monthly scale the attained p-values in the direction T → [CO2] are always smaller than in direction [CO2] → T by about 4 to 5 orders of magnitude, thus clearly supporting T → [CO2] as dominant direction. … The results of the study support the hypothesis that both causality directions exist, with T → CO2 being the dominant, despite the fact that the former CO2 → T prevails in public, as well as in scientific, perception. Indeed, our results show that changes in CO2 follow changes in T by about six months on a monthly scale, or about one year on an annual scale. … The change in carbon fluxes due to natural processes is likely to exceed the change due to anthropogenic CO2 emissions, even though the latter are generally regarded as responsible for the imbalance of carbon in the atmosphere. … The opposite causality direction opens a nurturing interpretation question. We attempted to interpret this mechanism by noting that the increase of soil respiration, reflecting the fact that the intensity of biochemical process increases with temperature, leads to increasing natural CO2 emission.