In this first (late) post of the new year, I will go back to a previous post about 18 new grid batteries that might be built in New South Wales. I estimated that the capacity to be build could be somewhere around 1,350 MW.

These batteries would most probably provide frequency control as does the Hornsdale Power Reserve in South Australia. But frequency control is just one small piece in the transition towards renewables. At some point in time, New South Wales will have to provide back-up capacity when they want to increase intermittent sources and cut back on fossil fuels. That made we wonder, if NSW would like to do this backup with batteries, how far would they jump with that 1,350 MW and how much dispatchable power could be displaced? Would that solve much of the back-up problem? Or is this just akin those proverbial gnats peeing on a fire?

That seemed a good project to work on. In the last weeks, I collected New South Wales grid data from the openNEM appliction (h/t TonyfromOz). There is a wealth of fine-grained data available on the openNEM application (I downloaded the 5 minutes dataset). it is about time to blow off the dust of Python and construct a model to explore this question.

This is what the model will do:

Let’s jump in with the base data. This is the distribution of dispatchable power (blue) and intermittent power (yellow) in the 7 weeks time frame:

The blue flat line below the area graph is the battery state. It shows what happens in the batteries. This is the base data, so the batteries are empty and there is no interaction with them whatsoever. Also, no power is curtailed.

The distribution of the intermittent power suggests that most of it is generated by solar. Looking at the data, solar generation is indeed roughly double that of wind. There is a huge variation of the intermittent capacity: from 38 MW until 4,329 MW. The dispatchable power sources are balancing out this variability in order to match demand.

My initial plan was to figure out how much extra intermittent power it would take to completely replace a lower dispatchable capacity with the help of the batteries.

That didn’t work out very well… In every scenario that I tried, it took an insane amount of extra intermittent power until the loss of dispatchable power was replaced. Just an example of the impact that the batteries have, limiting the dispatchable power capacity to 6,000 MW (light blue) and filling it in with twice the intermittent power capacity (yellow) plus battery power (red) gives this result (click to enlarge):

If you don’t see the red area, then just click on the image to enlarge it. The white areas below the demand line (black) are periods of deficit and they stay there for a long time. It was a bit surprising that doubling the current intermittent capacity couldn’t even top off the peaks. It took a multiplier of 20+ to completely disappear the deficit. At 20+ times the current capacity, there wasn’t any deficit anymore, but there was an insane amount of electricity that had to be curtailed.

In the end, it was not the capacity of the battery that made the difference, it was the increase of the renewable output that did the job and there are challenges involved in increasing the capacity of intermittent power generation.

Just compare the same situation (dispatchable power capped at 6,000 MW), but this time without battery backup (click to enlarge):

Those who want to see the difference, let me blow up the second graph. These are the first five days of that graph (click to enlarge): 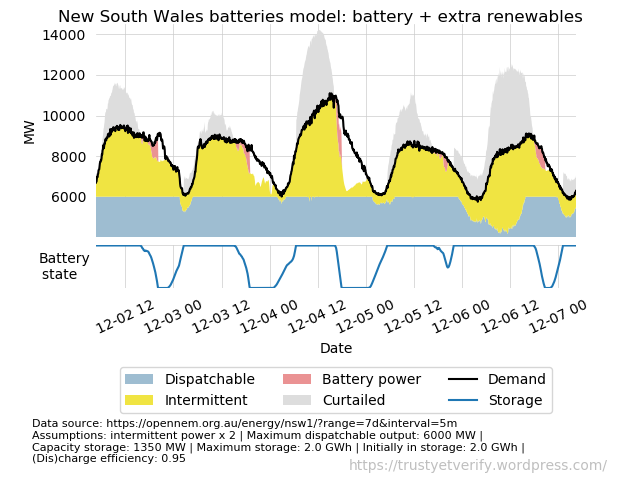 One has to blow up the image considerably to see any difference, the impact of the batteries with a total contents of 2 GWh is pretty small.

In fact, I shouldn’t have gone through all of this to figure this out. Just a back-of-the-envelop calculation would have sufficed. A surplus at a capacity of 1,350 MW during 5 minutes is 112.5 MWh. Having such a surplus for a while means that it will take roughly 1.5 hours to fill up an empty battery to the brim. Half of that capacity and it would be filled up in roughly 3 hours. So, the threshold is rather low and is therefor reached pretty quickly. That is also what is seen in the graph, the batteries are emptied and filled completely almost once a day, except when demand is low and generation is high. During most of the day it is or completely full (unable to fill any further) or completely empty (unable to draw anymore power). Leading to or curtailment or a deficit.

So, how much impact does a 2 Gwh battery have when it used as backup? Apparently very little. It will require a whole lot more than that to allow any significant balancing.