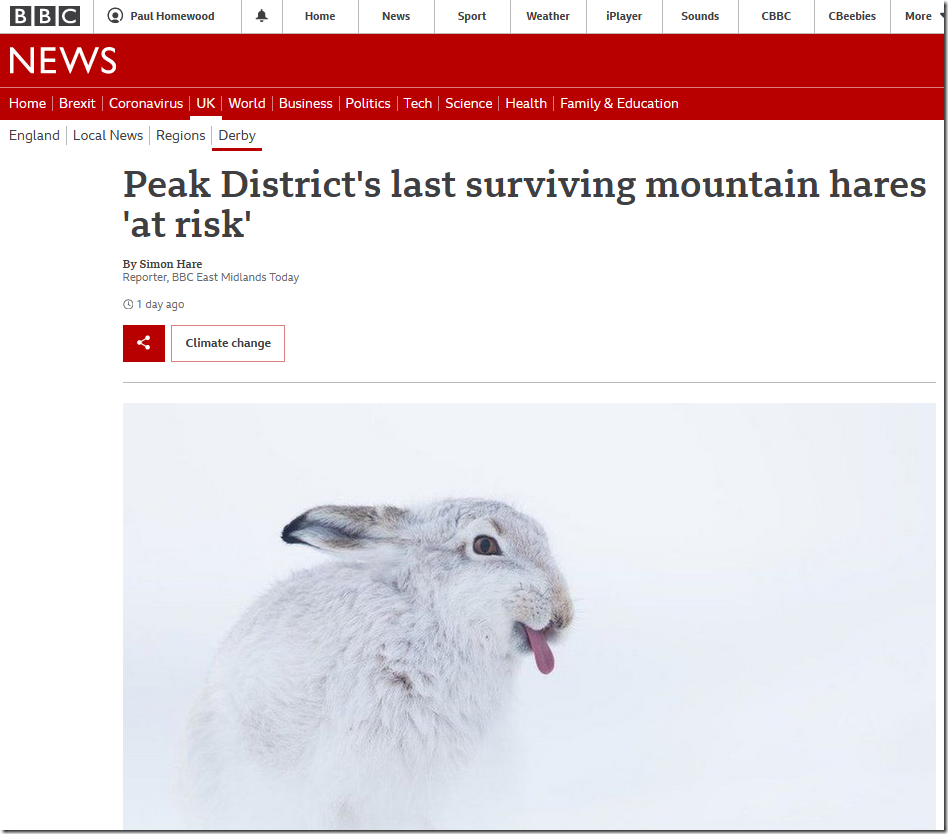 England’s last surviving population of mountain hares may be under threat due to global warming, a conservation group has said.

Recent studies suggest there are about 2,500 of the creatures in the Peak District which, experts say, is "not large" for an isolated population.

The People’s Trust for Endangered Species (PTES) is funding research to see if the number is in decline.

"These hares could be in trouble," said Nida Al-Fulaij from the trust.

Mountain hares – a sister species to the Arctic hare – died out in England during the last ice age.

"Reintroduction attempts were made in the late 1800s, and while most were unsuccessful, against all odds those released into the Peak District survived," said Ms Al-Fulaij.

"The Peak District’s altitude and colder climate is ideal habitat for mountain hares, who have adapted perfectly.

"But, with the onset warmer and more erratic weather, these hares could be in trouble."

The trust said it believes climate change is an increasing risk to the creatures’ survival, making summers too warm and reducing food sources, such as heather.

Reduced snow coverings mean the hares may not be as camouflaged in winter, despite their white coats.

"We can’t let them die out," Ms Al-Fulaij added.

Mountain hares died out in England during the last ice age, though they survived in Scotland. However, in the 1870s, some landowners reintroduced them in England and they began to thrive in the Peak District.

Contrary to the BBC’s misdirection, mountain hares were reintroduced to many areas of the UK in the 19thC, but most populations declined long ago. As often happens with these human efforts, they are unsuccessful partly because the environment is unsuitable for the animals, and also because the introduced species never reach a sustainable population size. Thus they remain vulnerable to the slightest stress, such as weather, disease, food shortage, competition, prey etc.

Below is the Review of British Mammals- 1995.  It states that the estimated population of mountain hares in the Pennines then was 500, in contrast to the current estimate of 2500:

It is never safe to directly compare population estimates from different surveys, as methodology may change and there are inevitably huge margins of error. Nevertheless there is no evidence of any decline in numbers.

What is apparent is that the Peak District population of mountain hares has always been small, extremely vulnerable and isolated since its introduction in the 1870s.

But no doubt while there is grant money about, researchers will continue to make the most of it, while the BBC will carry on playing the Climate Card.