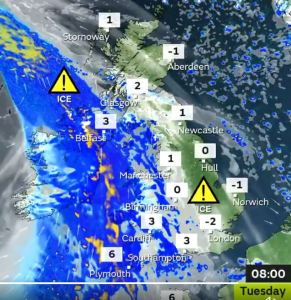 January 2010 was itself described as the UK’s coldest January since 1987. All three of these cold months occurred within a year or so of a solar minimum (end of a solar cycle). Cold weather and snow are continuing in some parts today, but not on a par with the current major US snowstorm.
– – –
The average temperature last month was 2.2C – the coldest January since 2010, Sky News reports.

This makes it the coldest January since 2010, when the average was 0.9C.

The coldest January on record was 1963, when conditions averaged -1.9C.

This week there are weather warnings for snow, ice and rain stretching from the Scottish Highlands down to the Midlands and across to Northern Ireland until Sunday.

An amber Met Office warning for snow is in place until 1pm on Tuesday across the north of England, with between one and six inches falling in Derbyshire, West Yorkshire and Greater Manchester.