A team of Danish scientists led by David Wangner published a paper a year ago about the results of a Greenland sediment core from Skjoldungen Fjord, near the Thrym Glacier, which allowed sea surface temperatures to be reconstructed. 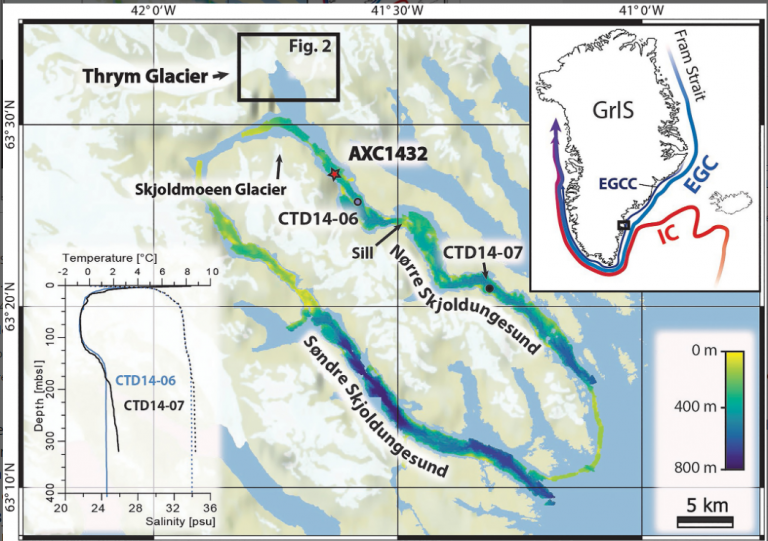 Map of the Skjoldungen area. The core location is indicated by a red star. Image: Wangner et al.

The core covers the past 200 years (1796–2013). The scientists find that the SST record compares well with other alkenone‐based reconstructions from SE‐Greenland and thus features regional shelf water variability.

Today some scientists like claiming the present is warmer than at any time in the past 1000 years and suggest the Greenland ice sheets are rapidly melting. But the results of the core reconstruction show that it was warmer in the past, some 80 years ago.

The reconstructed SSTs in fact “show high amplitude fluctuations between 5°C and 12°C, especially during the 20th century”.

As the reconstructed sea surface temperatures in the area show, it was just as warm or warmer back in the 1940s. The period of 1915 – 1950 was at a similar level as today, thus nothing unusual is happening currently.

The authors also say that even though the meltwater production may have been influenced by climate, the glacier margin position and iceberg calving remained relatively constant in the 20th century.

The Danish scientists are now requesting that Greenland glaciers be better taken into account in climate models and say that the unusual warmth of the early 20th century is related to a complex interaction between two major oceanic cycles: the AMO and the NAO.