Over two million homes and businesses in Texas are without power Monday morning as winter storm Uri sweeps across the central United States.

The alert turned into rotating outages that are likely to continue through Tuesday morning, according to grid managers.

About 2.5 million people were without power as of 9:00 a.m., the outlet tweeted: 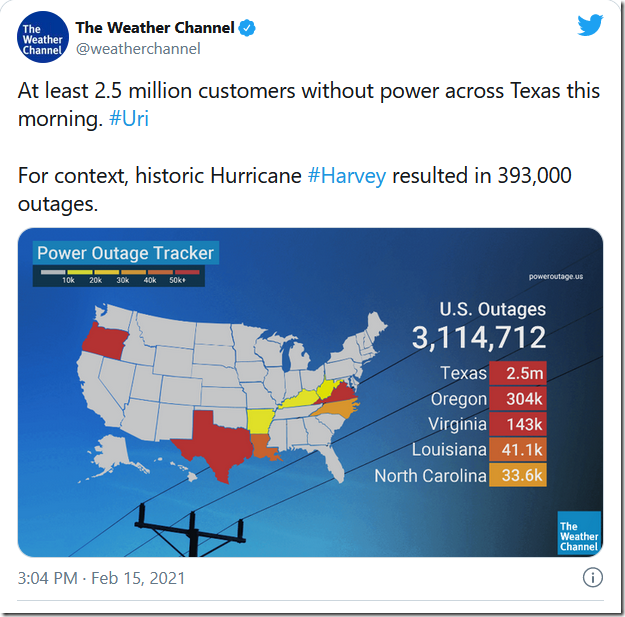 “Every grid operator and every electric company is fighting to restore power right now,” explained Bill Magness, who is president and CEO of the Electric Reliability Council of Texas.

Texas set a winter peak demand record Sunday night, and that demand was expected to increase Monday and Tuesday as temperatures fall into the low single digits or colder. The rolling outages were supposed to last 15 to 45 minutes, utility operators said, but the bitter cold was impacting some remote systems and causing the outages to last longer than planned.

Texans are being asked to conserve power where they are able.

Residents should keep their thermostat set at 68 degrees, avoid using appliances such as dishwashers, washing machines, and dryers, and turn off non-essential lights and other appliances.

The intense cold weather has seen power demand rise to levels normally seen in mid summer, but the real problem has been the failure of wind farms:

Nearly half of Texas’ installed wind power generation capacity has been offline because of frozen wind turbines in West Texas, according to Texas grid operators.

Wind farms across the state generate up to a combined 25,100 megawatts of energy. But unusually moist winter conditions in West Texas brought on by the weekend’s freezing rain and historically low temperatures have iced many of those wind turbines to a halt.

Wind power now supplies about a quarter of Texas’s electricity, more than double the figure five years ago:

Fortunately Texas can still get most of its electricity from reliable sources:

However, six coal fired power stations, totalling 3.9 GW, have closed in the last three years. Two more are scheduled to shut in the next few years. With these still on line, these blackouts could easily have been averted.

Heaven help America if Biden gets his wish and shuts down fossil fuel.

Meanwhile, the ironically named Electric Reliability Council of Texas (ERCOT), who seem surprised that it gets cold in winter, have told customers to set ceiling fans to the winter setting by running them clockwise, to pull the warm air down.

So that’s alright then!