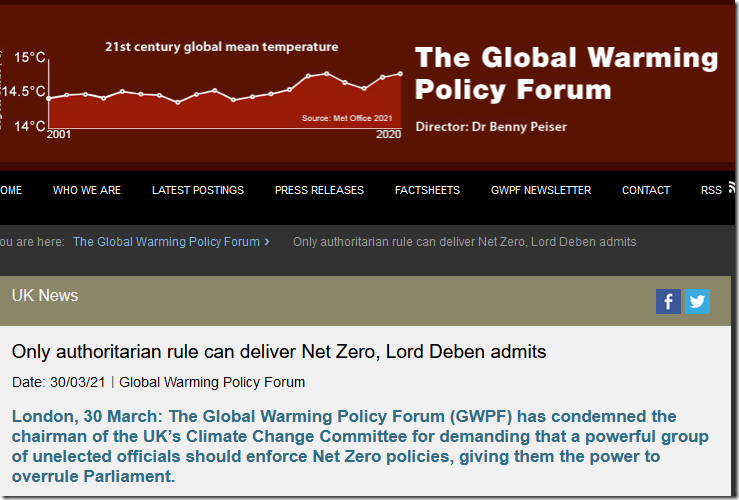 At a green investment event last week, Lord Deben praised the government’s climate policy objectives but referred to the delivery process as “crap” and demanded the creation of a new “powerful body” to force the private sector to act on policy. (Utility Week, 29 March 2021.)

I want to see a delivery system either within or outside the Department for Business, Energy & Industrial Strategy (BEIS). We need somebody doing the delivery direction […] You need to have a very clear and powerful body saying what has to happen, these are the priorities and get on with it. Unless we have that this whole thing will be policy strong, policy powerful and policy rich but delivery poor.”

Lord Deben’s remarks are a clear admission that in spite of a vast web of subsidies and regulations forcing businesses and even the military towards low carbon technologies, these technologies and policies are so lacking in real attraction that progress towards Net Zero is faltering.

A BBC survey published on Monday revealed that the vast majority of people in Scotland are not adopting low-carbon technologies and options because they “are financially out of reach for most Scots.”

Lord Deben’s answer to the public reluctance to embrace costly behaviour changes and green technologies is authoritarian and undemocratic: “You need to have a very clear and powerful body saying what has to happen”. Critics might reply that the United Kingdom already has such a body in the democratically accountable Parliament, and that Lord Deben’s demands are an attempt to circumvent that accountability.

Lord Deben’s suggestion that Parliament should be bypassed by an all-powerful Committee of Climate Safety is repulsively anti-democratic and also an admission of policy failure.”

Deben’s authoritarian proposal confirms the recent warning by Deutsche Bank that Net Zero policies threaten to result in a “noticeable loss of welfare and jobs” and are unlikely to succeed without “a certain degree of eco-dictatorship.”

It has long been evident that the policies involved in Net Zero will be hugely expensive and will be extremely unpopular once the public find out the hard way. That is why successive governments and Parliaments as a whole have kept on kicking the can down the road.

It is no coincidence that the US is moving in the same authoritarian direction, as Marc Morano outlines in his new book, with Biden eager to use decrees and regulation to force through his policies rather than allowing Congress oversight.