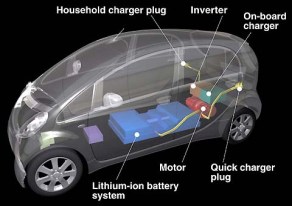 Reducing both costs and mining waste sounds good, if it can be developed to industrial scale.
– – –
A UK-based company has unveiled its what it believes to be the world’s most sustainable motor for electric vehicles, says ElectricHybridVehicleTechnology.

Its new motors are completely free of rare earth magnets, yet are said to be able to offer all of the performance and efficiency benefits and more of a conventional permanent magnet motor, without their considerable environmental drawbacks.

Unlike today’s standard EV motors, its HDSRM and SSRD motors do not feature rare earth magnets so do not require the harmful mining of materials such as neodymium and dysprosium.

According to independent research, every tonne of rare earth material mined produces up to 1.4 tonnes of radioactive waste, 200m3 of acid-containing sewage water, 60,000m3 waste gas containing hydrochloric acid and 27.6 tonnes of CO2.

Based on a global car production of 97 million vehicles, AEM’s technology could save the production of 133 million tonnes CO2 per year as well as 300,000 tonnes of radioactive waste.

Rare earths also appear at the top of most nation’s lists of critical materials, those where there is long term concern for security of supply.

As a result of this uncertainty, the price of neodymium, which is commonly used in permanent magnet electric motors, has increased by more than 240% between March 2020 and March 2021, meaning that they are financially unsustainable as well as environmentally problematic.

As well as rare earth metals, traditional permanent magnet motors also use copper windings. At end of life, the copper must be removed from the motor before recycling, making the process difficult and expensive.

AEM claims its technologies can be produced using only steel and aluminium, meaning that it can be recycled quickly, cost-effectively and completely.

HDSRM is a next-generation Switched Reluctance Motor (SRM) that, uniquely for this type of motor, operates with the standard power electronics used by most EV drivetrains. Its design and patented technologies claim that, unlike previous SRMs, HDSRM can operate quietly and with minimal torque ripple.