Let’s take another look at this study:

You will see that India is one of the worse affected countries.

We know that there is really only one factor which drives India’s agricultural output each year, the monsoon. Droughts are disastrous for India’s farming sector, and, regardless of floods, the more rain that falls the better harvests are.

If we look at the monsoon rainfall record, we see that major droughts occurred in :

In other words, during that period of global cooling from 1965 to 1987, ten major droughts occurred, effectively once every two years. In the last 23 years there have been just five.

This is no coincidence. As HH Lamb explained in 1982, when the Northern Hemisphere cools, the tropical rainbelts get squeezed around the equator, with a corresponding decrease in rainfall further north, which led to prolonged droughts in the Sahel and across into Asia: 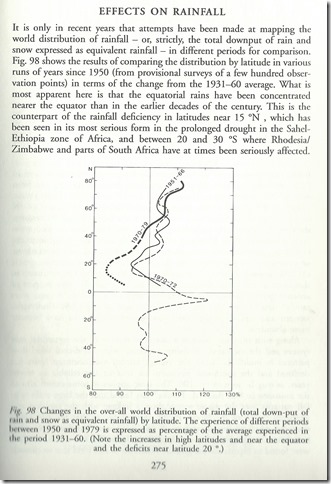 The study claims that India’s food productivity would have been 25%, if they still had the same weather as in the 1960s. But there is no conceivable mechanism why this should be so.