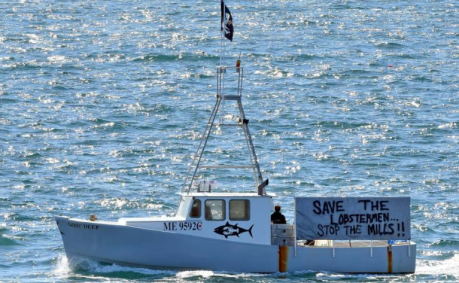 Be it farmers or fishermen, locals soon recognise that the charlatans pushing wind power couldn’t care less about their lives and livelihoods.

Fishermen are a fearless and tenacious bunch, renowned for their salty language.

Back in July 2018, hopeful wind developers planning to destroy fishing grounds off the New Jersey coast copped a taste of it, when fishermen there literally told them to stick their wind turbines where the sun don’t shine. And fair enough, too.

What peeves fishermen’s and farmers alike, is the propaganda ‘theatre’ – misleadingly referred to as ‘community consultation’ – where the developer’s coterie of hand-picked and highly paid pet experts pontificate about how every possible problem has been considered, and already solved, whatever it is, even if you haven’t thought of it yet. Truly brilliant, don’t you think?

The sales pitch usually goes further, with ludicrous claims that there’ll be thousands of permanent, well-paid jobs for locals; children will do better at school; millions of homes will be powered, for free; and all manner of rare and endangered species will be brought back from the brink of extinction, blah, blah, blah.

A mixture of gobbledygook and bureau-speak is ladled up as if it was scientific fact.

Ordinarily, the audience watches on with eyes glazed over and sits in a restless, brooding silence. Occasionally, some of the handful who actually understand that they’re being taken for fools, launch into a tirade against the developer’s PR goons.

Over time, though, the lies and propaganda have started to wear thin, and the numbers ready to tackle them, have increased.

Which brings us to a group of tenacious lobstermen who ain’t about to be taken for suckers, anytime soon.

This time the well-drilled response takes place off the coast of Maine, with dozens of boats marshalled in a flotilla signalling locals outright hostility to yet another community destroying project.

The protest rally included about 80 boats, according to several of the fishermen, and was held a dozen miles offshore, close to the spot where New England Aqua Ventus plans to build the huge wind turbine.

It’s designed as a test project to prove University of Maine technology for a floating platform, but it would be in place for 20 years.

Gov. Janet Mills is proposing to build more of the floating wind turbines farther offshore in the Gulf of Maine. The effort is part of a strategy to increase the amount of renewable power generated in Maine in order to fight climate change.

Fishermen say the turbines pose a threat to lobsters and other marine life, and that the underwater cable and other aspects are also a threat to the fishermen.

“It’s a threat to our livelihood its going to mess with the ocean and our way of life, no doubt about it,” lobsterman Andy House said. “And you say this one off Monhegan will still cause problems? Like I say, this one off Monhegan I truly believe is the foot in the door to get more than one out there.”

That site near Monhegan Island was designated by the state as a test site for offshore wind platforms more than 10 years ago.

The site and the route for the underwater cable are all within Maine’s three-mile boundary for state waters.

Lobsterman Larry Reed posted video on Facebook Monday morning of the Go Liberty, a 150-foot survey vessel, as it appeared to draw near lobster buoys in the water.

“He’s gonna tow right though that lobster gear with no concern. He’s got gear out towing, no concern whatsoever for our livelihoods,” Reed said in the video.

The U.S. Coast Guard says it sent boats from its Boothbay Harbor station to assist the state Marine Patrol on the scene, which is in state-administered waters. Company officials say the survey vessel was forced to stop operations to ensure safety. Fishermen say that Coast Guard and Marine Patrol boats monitored the situation, and by afternoon the vessel continued its work.

The flashpoint is a single-turbine, floating platform wind project under development by New England Aqua Ventus, in a collaboration between private industry and the University of Maine. The Go Liberty was contracted to survey potential routes for an electricity cable between the turbine and the coast.

On Sunday, several dozen fishing boats formed a protest flotilla off Monhegan, when the survey vessel was not active nearby.

“The peaceful protest that occurred yesterday is very different from the event that occurred today. Today is a risk to public safety, and really has crossed the line,” says state Rep. Genevieve McDonald, a Stonington lobsterman who works as a liaison between the New England Aqua Ventus ocean wind project and area fishermen.

McDonald says that between their concerns about pending gear rules that will aim to protect endangered North Atlantic right whales, the Monhegan wind project and a more recent state initiative to develop a 12-turbine wind array farther offshore, fishermen are scared for their future.

“So when you combine them, it’s sort of adding fuel to a fire that was already raging because of the issues with whale rules, and so people are very upset about this and we’re seeing that play out on the water,” she says.

An emerging bone of contention may be the placement of lobster traps and buoys within the survey area. For weeks, state marine regulators and company officials have been working to inform area fishermen about the pending survey and asking that gear be cleared temporarily from the ship’s track.

Aqua Ventus spokesman David Wilby says the Go Liberty documented some 220 buoys in the zone in mid-March, and found twice that number there a week later.

“The facts seem to suggest that may not be an accident,” he says.

Hampering the effort, Wilby says, will only make it harder to gather data that can be used to reduce potential harms by the growing offshore wind industry.

Lobstermen are skeptical of that argument. And they are seeking ways to halt the industry’s growth off Maine. But they say they have been reducing gear in the survey area.

“It’s a lot of money to put gear in the way of a vessel that’s just going to end up destroying it. No one wants to lose it; we cant afford to do that,” says Friendship lobsterman Dustin Delano, vice president of the Maine Lobstermen’s Association.

Another area lobsterman, Chad Burns, says the survey boat could easily have undercounted the buoys present during its first assessment due to rough weather and tides. He says he and other fishermen tended traps about 100 yards away from the Go Liberty on Monday and — as far as he could tell — it was continuing its work while federal and state patrol boats monitored the situation.

“We tried to move what we could but they’re not staying in the survey area. They’re going everywhere and anywhere. And it’s like a guessing game,” Burns says.

Wilby says as of late afternoon, the survey work was still on hold, with several fishing boats nearby and one deploying gear.

The state Department of Marine Resources said it was “assessing” the situation but declined further comment. Members of Gov. Janet Mills’ administration did not respond to requests for comment.
Maine Public