As the chart above shows Chile has vaccinated about 2/3 of its population, a world leader in that regard.  Some are puzzled how that nation would at the same time have a surge in confirmed Covid cases.  Let’s see how Chile compares on the cases metric in chart below 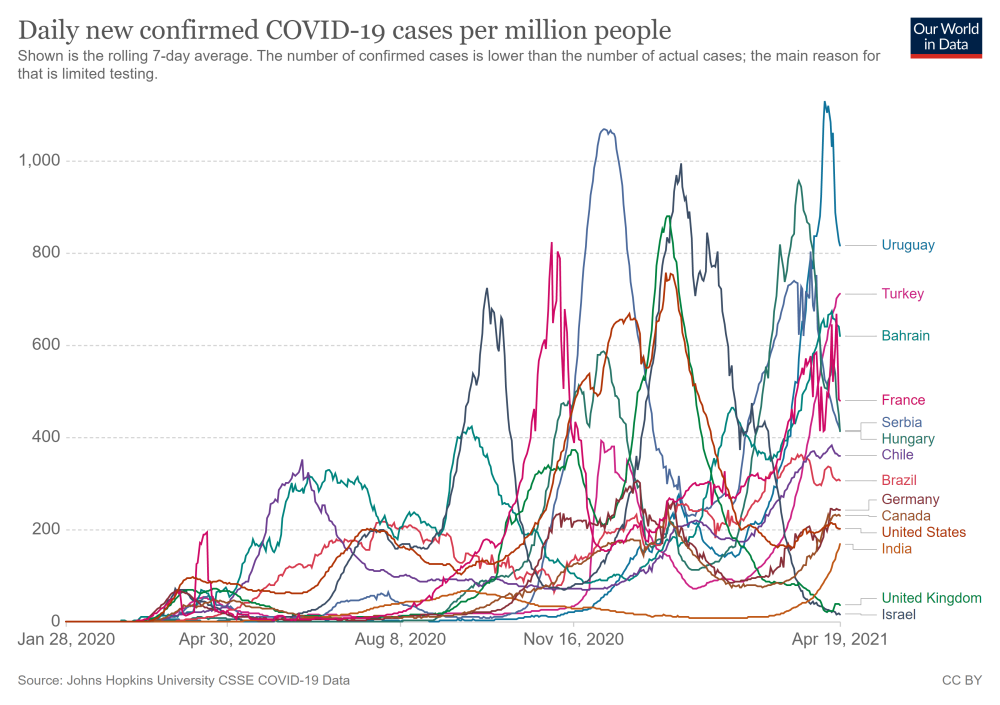 Chile has seen a rise in cases, though still in the middle of the pack of nations shown.  The screen grab below allows a clearer picture of the Chilean experience.

Thomas Lifson explains what is going on in Chile in his American Thinker article COVID surging in Chile despite high rate of vaccination.  Excerpts in italics with my bolds.

The headline and tone of this article from CNBC are alarming: “Chile has one of the world’s best vaccination rates. COVID is surging there anyway.” One must read 13 paragraphs into the story to begin to solve what looks like a mystery.

Chile’s vaccination campaign against the coronavirus has been one of the world’s quickest and most extensive, but a recent surge in infections has sparked concern beyond its borders.

Almost 40% of the South American country’s total population have now received at least one dose of a COVID-19 vaccine, according to statistics compiled by Our World in Data, reflecting one of the highest vaccination rates in the world.

Chile is an impressive country in many respects. Yet:

The number of daily cases in Chile rose to a record high on April 9, climbing above 9,000 for the first time since the pandemic began and significantly higher than the peak of almost 7,000 recorded last summer.

Health experts say the country’s latest surge in cases has, in part, been driven by more virulent strains of the virus, a relaxation of public health measures, increased mobility and defiance of simple precautions — such as physical distancing and wearing a mask.

These are all Fauci favorites. Live in fear of new strains (and be prepared for masks and lockdowns forever because viruses mutate, you see). For goodness’s sake, isolate from each other, and don’t let herd immunity develop (as it seems to have done in free states like Texas and Florida and in Sweden). And above all, wear your obedience mask and live in a world without smiles.

Oh, yes: Cut yourself off from the rest of the world. Right-wing Chile didn’t, and look what happened:

Chile’s center-right government, led by President Sebastian Pinera, had ordered the closure of the country’s borders from March to November of 2020, albeit with a few exceptions, before the decision was taken to reopen them to international passengers late last year.

Finally, after all these possibilities have been mentioned, we get to what’s really going on:
There have also been questions raised about vaccine efficacy, given Chile’s widespread use of CoronaVac,
the coronavirus vaccine manufactured by Chinese firm Sinovac.

Late-stage data of China’s COVID vaccines remain unpublished, and available data of the CoronaVac vaccine is varied. Brazilian trials found the vaccine to be just over 50% effective, significantly less effective than the likes of Pfizer-BioNTech, Moderna and Oxford-AstraZeneca, while Turkish researchers have reported efficacy as high as 83.5%. (snip)

A study published by the University of Chile earlier this month reported that CoronaVac was 56.5% effective two weeks after the second doses were administered in the country. Crucially, however, they also reported that one dose was only 3% effective.

“This would help to explain why Chile — with one of the world’s most robust vaccine rollouts but 93% of the doses coming from China — has experienced a simultaneous significant expansion in cases, and a much slower decline in hospitalizations and deaths compared to the early rollouts in Israel, the United Kingdom and the United States,” Ian Bremmer, president of risk consultancy Eurasia Group, said in a research note.

Nowhere in the long article, which suggests that “‘comprehensive strategies’ to speed up the rollout of vaccines and stop transmission by using proven public health measures” may be necessary, is there any mention at all of therapeutic approaches using hydroxychloroquine or ivermectin in combination with zinc and vitamins, which has proven highly effective in arresting the development of cases, and even in prophylactically protecting people. Both drugs have been taken by millions of people for many years with very few reported adverse reactions.

Isn’t it curious that this obvious approach is not worth mentioning?