This might be one of the most incompetent studies of 2o21

Hanigan, Dear and Woodward have done a “unique”, first of, *groundbreaking study* that finally shows climate change is having a detrimental effect on our health (so they say). With great effort to ignore almost every variable that mattered, they found the seasonal ratio of deaths in Australia has changed:

”More people die in winter than summer, but climate change may see this reverse

In our study published today, we show some of the first evidence climate change has had observable impacts on Australians’ health between 1968 and 2018.

We found long-term heating is associated with changed seasonal balance of deaths in Australia, with relatively more deaths in summer months and relatively fewer deaths in winter months over recent decades.

Our findings can be explained by the gradual global warming associated with climate change. Over the 51 years of our study, annual average temperatures increased by more than 1°C in Australia. The last decade (2011 to 2020) was the hottest in the country’s recorded history.

The other interpretation is that it got warmer and deaths in winter declined more than deaths in summer did.

Basically if climate change does anything it’s saving us from even more deaths in cold weather. Three cheers for fossil fuels.

The climate trend is unequivocal: The hotter it got the longer we lived

But Hanigan et al miss the obvious and work pretty hard to find that the slope of the summer deaths (diamonds) below is rising slightly faster than the winter deaths (squares).  Panic now. That’s how bad climate change is (and that how overfunded our universities are.)

Here’s another awkward fact they don’t mention: Heatwave deaths in Australia peaked around World War I? 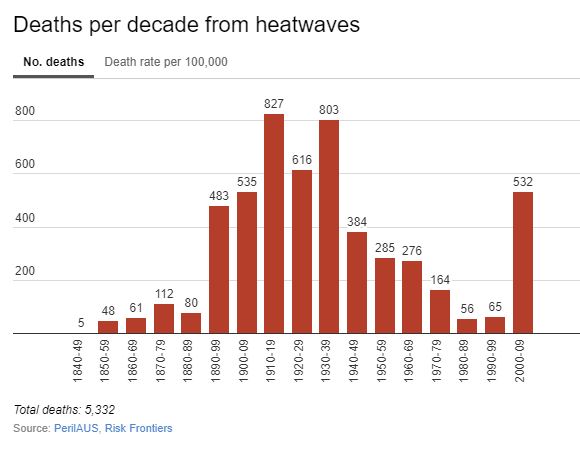 “Our research is unique

“Globally, our study is one of very few that directly shows the health impacts of climate change.

Methinks, their study directly shows what a waste of money higher education is:

In our study, we used Australian mortality records that have been collected with remarkable consistency of detail and quality over the last half century. And by focusing on the ratio of summer to winter deaths within each year, we avoid possible confounding associated with, say, improvements to health care.

So they avoided the confounding factor of “improvements in health care” but completely forgot that people predominantly died of different things in 1968 — like especially heart failure and influenza, both more likely to increase in winter. These days the increase in deaths due to Alzheimers and dementia share the fatal events across the year. This one factor alone probably explains the minor trend they found.

Many more people die of cardiovascular deaths in winter rather than summer.  Barnett et al 2008

For a second, they even have to admit that more climate change might save more lives

In one study on the topic, the authors found Australia may initially experience a net reduction in temperature-related deaths. That is, increased deaths from heat during summer would be offset by fewer deaths in winter, as winters become more mild.

However, they predict this pattern would reverse by mid-century under the business-as-usual emissions scenario.

We found the speed of change in the ratio of summer to winter deaths was fastest in the hottest years within each decade.

So on an upward long term trends for both temperatures and deaths, what’s the bet that the last years of each decade are more likely to be both hotter and more deadly?

This paper is more evidence that the worst kind of scientist’s are the most likely to get promoted.