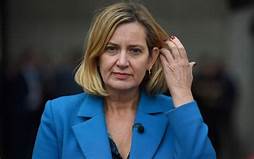 Amber Rudd, former Secretary of State for Energy in 2015/16, has been cleared to take up a part time, paid employment at Ernst Young, one of the Big Four Accountancy & Consultancy Firms.

Her new job has been approved by the Office of the Advisory Committee on Business Appointments.

So what, you might ask! Well, according to the Committee, her new job entails:

The need for this “energy transition” is, of course, the direct result of policies pursued by Rudd and her fellow ministers at DECC and now BEIS. And potentially such consultancy work could be a huge money spinner for both EY and Madam Rudd herself.

Would EY have offered her this job, if she had not previously worked at DECC? Silly question really!

Rudd is of course one in a line of politicians who have directly profited from the climate scam, which they have helped to promote:

Her predecessor at DECC, the criminal Chris Huhne got himself a nice little earner at Zilkha Biomass, a manufacturer of wood pellets, and is still Chairman, Europe. Biomass was, of course, one of the policies ardently pursued by Huhne.

His successor, Ed Davey, has also been earning from the scam. As well moving into a job as Chairman of Mongoose Energy, a company which develops solar farms, Davey also set up his own consultancy in 2015 providing advice on, yes you’ve guessed it, energy and climate change.

And that’s even before we mention John Gummer!