What grows on a wind “farm” ?  Debt-cows

On Wednesday nearly all the wind generators in the country failed. About 4,000 turbines across five states of Australia were hit by some kind of simultaneous fuel crisis. At one point all the wind power in our national grid was only making 3% of Australia’s electricity, and that was the best part of the day. At its worst, all those turbines produced about 1.2% of the power we needed. It was that bad.

Across the nation, something like $15 to $20 billion dollars of infrastructure ground to a halt. 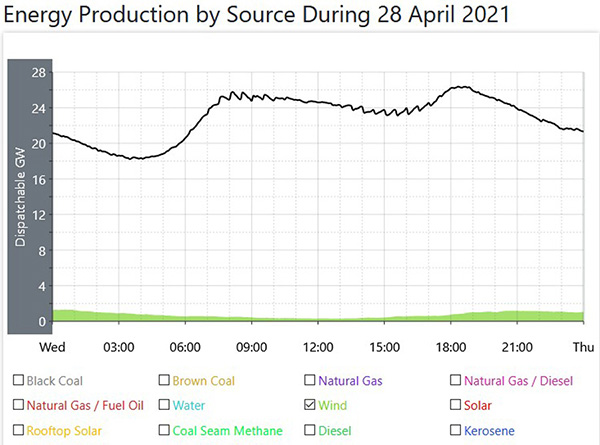 As Rafe Champion would say — it was a “choke point” all day.

It would be nice to believe this incident was due to all the old failing wind towers that used to be reliable workhorses. If only. Then there would be hope we could fix things. But these were mostly new towers, and this is as good as it gets.

We could double the money and build Snowy 2.0 power storage, state interconnectors, and batteries. Otherwise we just have to pay off the Sun, the Moon and the Southern Oscillation.

Or, of course, we could back up 99% of the entire grid with fossil fuels (and some Hydro), which we do.  But then the wind farms are completely superfluous, except to make the Greens feel good, and the Renewables Industry rich. 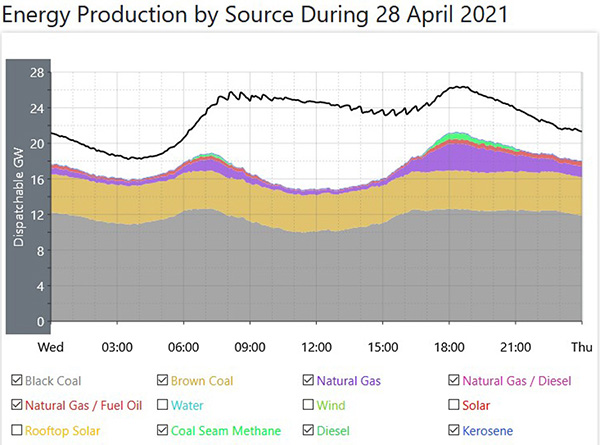 TonyfromOz estimates we get a day like this once a year, but there are a lot of 6-hour-type squeezes when all 4,000 plus turbines make even less. A battery just isn’t going to cover that…

Who pays for the back up? We the People.

As TonyfromOz says: compare the productivity of a 50 year old coal plant

Let’s look at the ancient old clunker Liddell, now coughing its last, after 50 years of operation. Only two of its four Units are in operation, and both of them are operating at much reduced Capacity. Liddell delivered more power across the day than did EVERY wind plant in the Country, in fact nine percent more power across the whole 24 hour recording period.

So, on this day, every single wind plant in Australia cannot match the delivery from HALF of the oldest coal fired plant in the Country.

We’ve spent something in the order of $20 Billion dollars to get an 8GW generator that doesn’t work most of the time.

BTW — The graphs come from Anero.id, a site set up by one man — Andrew Miskelly — that provides an essential service our well funded AEMO and the entire Ministry of Energy and Infrastructure can’t manage to provide. Amazing what one determined bright guy can do.

For more information see TonyfromOz: Daily power for Tuesday 28th April: All day wind power was generating between 1 and 3% of the total Grid requirements.

References and estimates below

The rough cost and size of the Australian Wind fleet

On  paper there is 8,100MW of theoretical Wind power on the National Energy Market in Australia.

(Once, for five minutes, all the turbines produced 5,310MW).

The largest installation in Victoria — The MacArthur wind “farm” — cost more than $1b in  for supposedly a 420MW plant which works like a 100MW generator except for all the times it doesn’t.  At that rate, the cost of building all the wind plants in Australia works out at around $19b.

The largest plant in Australia is the Coopers Gap Wind Plant, and its cost was $850 Million for a 452MW plant. With this new bulk savings the total build in Australia for 8GW of wind would be about $16b. But we probably spent a lot more.

The average wind tower is 1.95MW, so there must be around 4,200 wind towers in Australia in to add up to 8.1GW in total Nameplate capacity.

The current Capacity Factor of wind power in Australia is about 29.5% according to Tony. It’s as if it was a 2400 MW really unreliable generator.