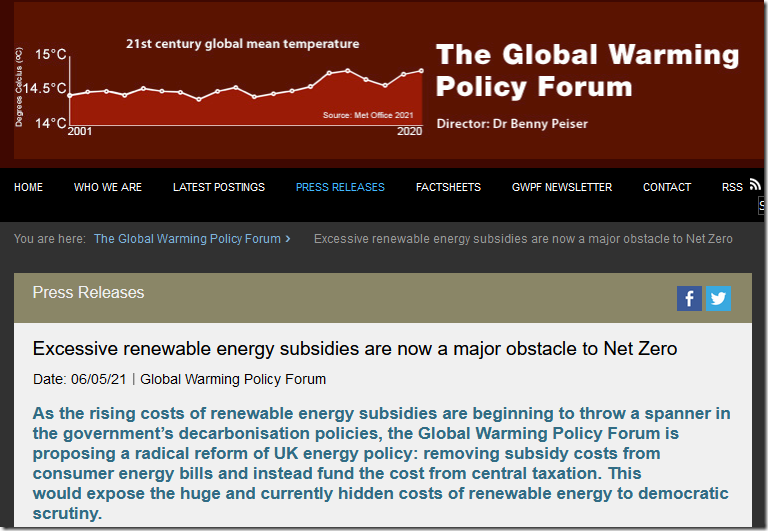 As the rising costs of renewable energy subsidies are beginning to throw a spanner in the government’s decarbonisation policies, the Global Warming Policy Forum is proposing a radical reform of UK energy policy: removing subsidy costs from consumer energy bills and instead fund the cost from central taxation. This would expose the huge and currently hidden costs of renewable energy to democratic scrutiny.

Electricity is widely agreed to be crucial to decarbonisation efforts, yet renewables and their subsidies make electricity extremely expensive, adding over £12 billion a year to consumers’ electricity bills. This high and rising cost is a strong disincentive to adopt electric cars or heat pumps. Only the well-off will be able to afford them.

The influential public relations firm Public First has produced a study, supported by the major electricity suppliers, which sketches a means to fund part of the renewables subsidy costs from central taxation and so remove this obstacle to electrified heating. Only subsidies raised from household bills (about 40% of the total) would be replaced, and this relief would be offset by a new carbon tax on gas and electricity.

GWPF is today publishing a comment on Public First’s reform proposal,  concluding that though a step in the right direction it is inadequate to the task, for the following reason:

1. The proposal does not provide real relief to consumers, merely moving the cost from electricity to gas via a carbon tax.

2. Revenue from the proposed carbon tax would inevitably fall over time, increasing the burden on taxpayers in the wider economy.

3. The only winners from the proposal, are the energy companies who funded Public First’s work, since they are able to swap a difficult and uncertain revenue stream from consumer bills with a gilt-edged cashflow from the Treasury. This is deplorable.

Nonetheless, Public First’s work has given prominence to a well-known problem, namely that very large and rising subsidies to renewables are now a major obstacle to the government’s Net Zero policies.

The Global Warming Policy Forum therefore suggests that ministers consider a more radical approach to reform, removing subsidy costs from all consumer bills, domestic, industrial, commercial and public sector, and instead fund the cost from central taxation. This would expose the huge and currently hidden costs of renewable energy to democratic scrutiny.

The GWPF believes the public realisation of the true cost burden would not survive such an audit. Indeed, cancellation of renewables subsidies and the adoption of more cost effective low-carbon policies would be a huge step towards revitalising the British economy.

There is an urgent need to cut subsidies to renewables in the UK. Removing them from the national electricity bill and funding them from general taxation, so that the public can see what is currently being spent by stealth is a necessary first step. Democratic audit and cancellation will be the next move. It can’t come too quickly.”