A new shattering study by scientists shows natural El Niño–Southern Oscillations (ENSO) are undoubtedly linked to the 22-year Hale solar cycle – far beyond any coincidence. NOTHING TO DO WITH CO2.

El Niño and La Niña events cause global temperatures to fluctuate by more than half a degree, and affect droughts and flooding globally. Predicting them would be extremely useful. However, their predictability has remained elusive.

The findings of the new paper promise, however, to vastly improve predictions, as these equatorial Pacific oscillations have now been linked to solar activity, principally “a more precise 22-year clock for solar activity, derived from the Sun’s magnetic polarity, which completes a full cycle every 22 years (Hale Cycle). 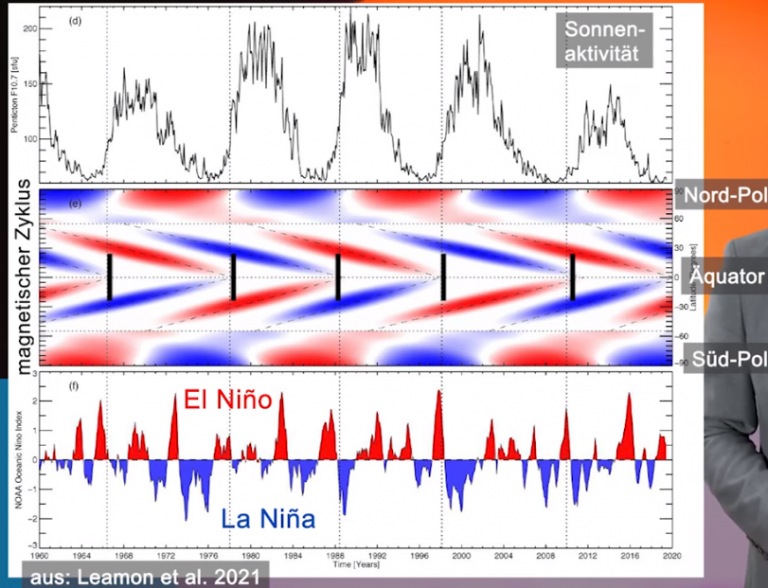 The 22-year cycle begins when oppositely charged magnetic bands that wrap the Sun appear near the star’s polar latitudes. Over the cycle, these bands migrate toward the equator — causing sunspots to appear as they travel across the mid-latitudes of the Sun.

The cycle ends when the magnetic bands that wrap the Sun meet in the middle terminate one another in what the research team calls a “terminator event”.

And whenever that happens, a new La Niña event begins. 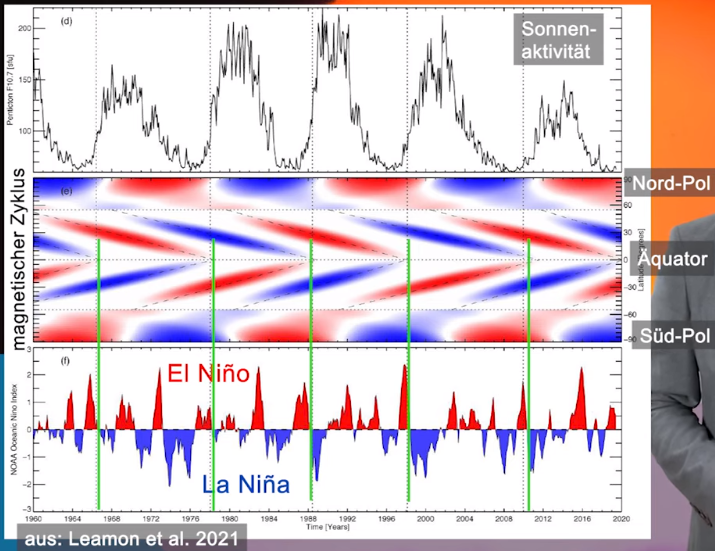 Each yellow line coincides with the end of a solar 22-year Hale Cycle, which also happens to coincide with the start of a new La Nina – the onset of a marked global temperature drop.

According to Eureka Alert, the researchers imposed these terminator events over sea surface temperatures in the tropical Pacific back to 1960 and found that the five terminator events occurring between 1960 and 2010-11 all coincided with a flip from an El Niño to a La Niña.

The authors add: “The end of the most recent solar cycle — which is unfolding now — is also coinciding with the beginning of a La Niña event.”

“Now that a sixth terminator event — and the corresponding start of a new solar cycle in 2020 — has also coincided with an La Niña event,” the authors said.

The latest marks the 6th consecutive time. The chances of this happening, the scientists say, are much less than 1 in 5000!

Nothing to do with CO2

In the world of climate alarmism, the global temperature increases associated with El Niño events are often blamed on CO2. Nothing could be further from the truth.

When global temperatures drop during times of La Niña – as has been the case once again for the current La Niña – alarmists choose to wait things out. But now it appears we have found a natural explanation – the solar 22-year Hale Cycle.

It has nothing to do with CO2.

The mechanism that acts between the Sun and the earth is still a mystery. The scientists believe it is linked by the the Sun’s magnetic field.

So, if you wish to know when we can expect a new La Niña, at the latest just wait until the start of the next solar cycle! Six consecutive times is no coincidence.