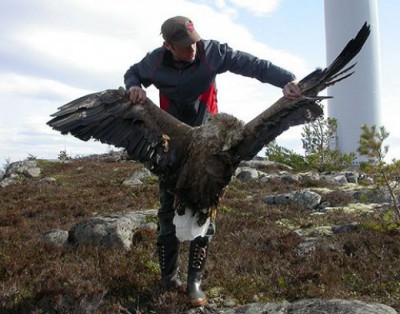 As the bird and bat carcass count mounts, it gets harder to ignore the wind industry’s bloody and unnecessary slaughter of our feathered friends.

Those running ‘interference’ for the wind industry claim wind turbines couldn’t harm a fly, let alone kill birds of any consequence. Apparently having no experience of apex predators like Eagles, Kites, Hawks and Falcons, the wind cultist/apologist/propagandist asserts that more birds are killed by flying into windows or being struck by cars, than their beloved wind turbines.

Cars, cats and skyscrapers don’t kill Eagles – like the critically endangered Tasmanian wedge-tailed eagle, but 60m wind turbine blades with their tips travelling at 350Kph routinely smash them out of existence.

Millions of tonnes of beneficial bugs get splattered annually, too, but no mind – this is all about saving the Planet, right?

In his article below, Joel Merriman gets drawn into the line spread by the wind industry and its apologists; namely, the idea that cats are comparable to wind turbines when it comes to killing birds. Comparing abundant sparrows and rare and endangered Bald Eagles, is no comparison at all. But it’s one that the wind industry all too readily makes. And one which we will return to, later in the post.

Birds face a host of threats — habitat loss, predation by outdoor cats, collisions with windows, pesticide poisoning … the list goes on. Cumulatively, the losses are huge: A recent study by American Bird Conservancy and others showed that there are 2.9 billion fewer birds in the U.S. and Canada than in 1970 — a nearly 30-percent decline of the total population.

Another recent study evaluated the vulnerability of 604 North American bird species to the effects of climate change. Researchers found that 64 percent were vulnerable in some way. To protect birds from the impacts of climate change, we need a rapid, multifaceted approach to reduce greenhouse gas emissions.

That’s where renewable energy comes in. Wind and solar energy development are occurring at a rapid pace across the U.S. as part of the broader effort to phase out fossil fuel use.

However, there is an unfortunate side effect — wind and solar energy infrastructure are threats to birds.

Yet somehow, whenever the subject of how many birds are killed by wind turbines comes up, it is often remarked that wind turbines kill fewer birds each year than do other threats like outdoor cats and window collisions. The intention here seems to be to make it sound as though wind turbines are not a significant risk to birds.

While it’s technically correct that some other threats kill more birds than wind turbines do, this argument is in some ways misleading, and in other ways irrelevant.

To understand why, let’s take a look at the numbers.

A Tale of Scale: Cats and Other Threats Versus Wind Turbine Mortality
The argument to downplay wind energy’s impact on birds relies on a comparison of total numbers of birds killed each year by outdoor cats, window collisions, and other human-caused threats, citing a seminal publication by Dr. Scott Loss and others.

This work synthesized a series of studies, which the authors themselves conducted, examining annual bird mortality due to a number of threats. When these threats were compared side-by-side, wind turbine mortalities did not top the list.

While it’s important to consider the totals — outdoor cats do kill a staggering number of birds — stopping there ignores the scale of each individual threat.

For example, Dr. Loss’s outdoor cat study indicated that there are 30 to 80 million unowned cats in the United States. Compare that to 44,577 — the number of wind turbines on the landscape in 2012, when Dr. Loss’s wind turbine study was published. The difference in scale is vast: There were roughly 700 to 1,800 times as many unowned cats as wind turbines at that time.

For another perspective, let’s turn the numbers around: How many birds would be killed if there were 30 to 80 million wind turbines? Clearly, this will never happen. But we can’t dismiss the impacts that wind turbines have on birds, particularly given the rapid growth of the wind energy industry.

Birds Already at Risk
It is also important to consider that wind turbines do not have the same impact on all birds. Some bird species are more susceptible to collisions with turbines, and some are less capable of sustaining losses than others due to their reproductive ecology.

For example, the Skookumchuck Wind facility in western Washington began operation in 2020, and will kill an estimated 85 federally Threatened Marbled Murrelets over the project’s 30-year permit term.

Unfortunately, this isn’t the only rare or iconic species threatened by wind energy development.

Researchers found that the population of Golden Eagles at the Altamont Pass Wind Resource Area in California was maintained due to “continental-scale immigration.” In other words, local losses were balanced only by arrival of new eagles from other parts of North America. Wind facilities in southern California are expected to also kill Endangered California Condors.

These species have slow rates of reproduction. Marbled Murrelets and California Condors are particularly slow — each breed only every other year and raise a single chick. Each bird lost is a blow to already vulnerable populations.

There is some overlap in species that are killed by wind turbines, cats, and other threats, but some species that are at risk due to wind energy development are unlikely to encounter any of the others. It would take an ambitious cat, for example, to kill a Golden Eagle.

The Big Picture
At the end of the day, cumulative impacts are what truly matter most. Put another way, wind energy development is but one of many sources of bird mortality, and these are additive.

Which source of mortality kills more or less birds is somewhat irrelevant — birds are being killed by wind turbines and outdoor cats and window collisions, etc. And the threat posed by wind turbines grows with each facility constructed in a high-risk area for birds.

We couldn’t agree more. We can’t throw caution to the wind when it comes to our vulnerable and declining bird populations.
American Bird Conservancy

Cats pose little or no threat to healthy Eagles, Hawks, Kites and Falcons, nor do high-rise buildings or power lines. When it comes to wiping out that group of apex avian predators, wind turbines are in a league all their own. As the next couple of articles attest.

A bearded vulture which was part of a breeding programme to boost the population in Europe, has not survived an encounter with a wind turbine in Wieringerwerf.

Bearded vultures, whose wingspan can reach some three metres, are one of the largest birds in Europe. It is on the ‘near threatened’ list of the International Union for the Conservation of Nature which means it could face extinction in the future.

The animal in question, called Angèle, was released last year as part of a French reintroduction programme and was equipped with a tracking device which measured its location and speed. When the speed dropped Vulture Conservation Foundation president Hans Pohlmann, who had been following the animal’s progress from France, feared the worst, he told NH Nieuws.

‘We had seen it flying in between two turbines the day before and were afraid it might crash into one,’ Pohlmann said. ‘It’s a terrible shame and a big blow to the introduction programme. It was very upsetting to see it lying there.’

The Vulture Conservation Foundation has been involved in the reintroduction of the bearded vulture, or lammergeier, since 1986. ‘There were only some 70 pairs left in Europe in the1970s. There are some 1,300 bearded vultures in Europe now.’ Pohlmann said.

It is the first time a bearded vulture, which is only spotted some three times a year in the Netherlands, has flown into a wind turbine in this country.

‘But it won’t be the last,’ Pohlman said, ‘because their number is growing and so is the number of wind turbines, We know that bearded vultures are unable to change course at the last minute, so the turning blades are a big danger.’

The solution would be to equip the turbines with a system which stops the blades from turning when a big bird approaches. Some turbines in Zeeland already have that system in place and so do wind turbines in Portugal and Spain.’ We think all turbines should have it,’ he said.

The dead bird has been taken to Wageningen University & Research which will investigate if it was suffering from any underlying conditions.

The Natuurhistorisch Museum in Rotterdam has already put in a request with the university to include the animal in its collection but, surprisingly, not of animals which have met their deaths in an unusual way.

‘We just want it for our regular collection, but it is not clear yet if the animal will be kept and if our museum will be the one to get it if it is,’ curator Bram Langeveld told DutchNews.nl.
Dutch News