Entrapment on Capitol Hill: Did the FBI infiltrate and even lead the riot? 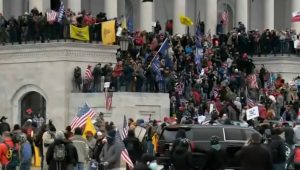 While many people are being held in jail, without bail, five months later — often the people who appeared to be the more aggressive activists at Capitol Hill didn’t even get indicted.

Were these people legally protected because they were undercover operatives or informants working with the FBI? If so, how much did these actors instigate events and thus entrap genuine protesters?

And if the FBI knew this event was going to happen, on “the most important day ever in Congress”, why didn’t they stop it and let Congress debate the question of whether the election was stolen? Seven US states had sent in dual electors, effectively choosing both Biden and Trump, and a growing number of Senators in five of those states had upped the ante by calling for full decertification. All that Donald Trump, Rudy Guiliani and 88 State Senators were asking for, was a ten day delay so those key states could consider the new evidence and vote again and choose one set of electors.

Look who benefited from the Capitol Storming

Revolver takes a close look at the two different types of protestors at Capitol Hill:

The first category is the group of mostly harmless tourists who walked through already opened doors and already-removed barricades, and at most were guilty of minor trespassing charges and light property offenses. The second group consists of those who were violent with police officers, broke down barricades, smashed windows, belonged to a “militia” group engaged in military-style planning prior to the event, discussed transporting heavy weaponry, and so forth.

What’s at stake in these investigations:

If it turns out that an extraordinary percentage of the members of these groups involved in planning and executing the Capitol Siege were federal informants or undercover operatives, the implications would be nothing short of staggering. This would be far worse than the already bad situation of the government knowing about the possibility of violence and doing nothing.

Instead, this would imply that elements of the federal government were active instigators in the most egregious and spectacular aspects of 1/6, amounting to a monumental entrapment scheme used as a pretext to imprison otherwise harmless protestors at the Capitol — and in a much larger sense used to frame the entire MAGA movement as potential domestic terrorists.

Meanwhile the ABC News said nothing, and SBS News told Australians tonight that “White Supremacy” is the single greatest threat the US faces.

Remember the strange “Governor Whitmer Kidnapping Plot?” One third of those that Stormed Michigans Capitol turned out to be FBI agents or informants, and many of the people at that storming also came to Capitol Hill on Jan 6th.

…what if we told you that scarcely three months before the 1/6 Capitol Siege, the FBI arrested 14 people for planning to kidnap Michigan Governor Gretchen Whitmer and overthrow the State Government — and that the alleged conspiracy to overthrow the State government involved storming of the State Capitol?

And what if we told you that of the 14 individuals who allegedly plotted the “kidnapping” and overthrow of the state government, at least five were undercover agents and federal informants? And as if that’s not enough, many of the individuals allegedly involved in this plot appear to belong to the “Three Percenters,” one of the very same militia groups now blamed for storming January 6.

And, as the cherry on top, what if we told you that the director of the Detroit FBI Field Office, who oversaw the infiltration operation of the Michigan Plot, was subsequently granted a highly coincidental promotion to the D.C. office, where he is now the lead FBI agent for all 1/6 cases?

As crazy as it sounds, all of this is true…

What did the FBI know, when did they know it, and were they involved?