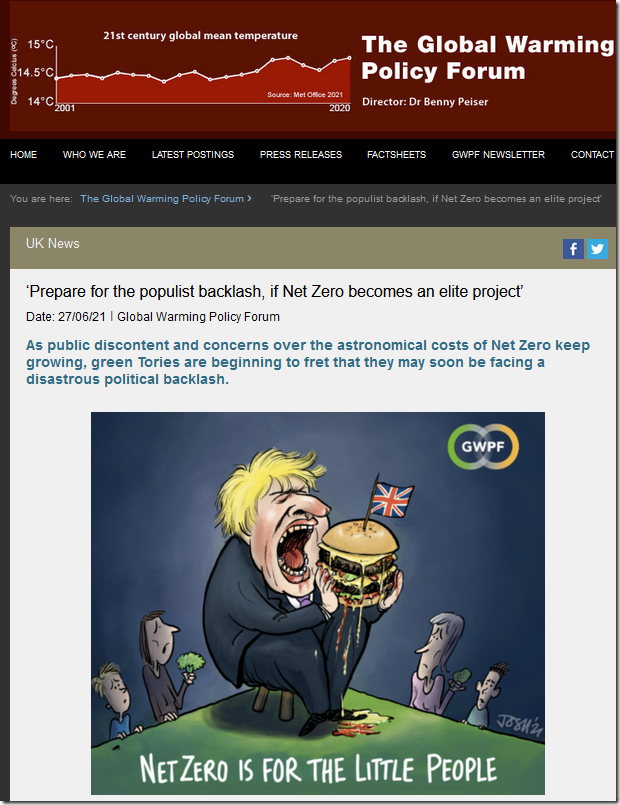 In the Sunday Telegraph, the UK’s former energy minister, Chris Skidmore, is unnerved by this likely prospect and warns that the Net Zero agenda will fail unless ministers are honest with the public ‘about the scale of what lies ahead….’

Mr Skidmore’s alert about the geopolitical risks of going green is certainly timely, as is his warning about the growing risk of power shortages if the UK were to follow a renewables-only policy.

But when it comes to honesty and trust, Mr Skidmore would be well advised to refrain from claiming that the cost of offshore wind has come “crashing down.” Empirical data shows that this is simply not the case.

As for the Climate Change Committee and the UK Government, how about coming clean and reveal the dodgy Net Zero cost estimates they are trying to hide?

After all, Mr Skidmore is right when he warns about the true risk Net Zero faces:

Trust means working with people to achieve shared ambitions and potential, not working to a centralised plan without widespread support that will be destined to fail.”

Chris Skidmore’s article is largely self-congratulatory, for instance when he says:

Two years ago today I sat down at my ministerial desk and signed a piece of legislation that quietly committed the UK in law to reducing its carbon emissions to “net zero” by 2050 . We would drastically reduce our carbon footprint, to the point of negating any carbon dioxide that we could reasonably be held responsible for. We would become, in the stroke of a pen, the first G7 country to commit to such an endeavour.
Looking back two years on, little could I have fathomed that the UK’s leadership on net zero would have set off a chain reaction across the globe, with 75 per cent of the world’s land mass now signed up to a net zero target.

We’ll leave aside his evident delusion that the rest of the world is going to commit economic Hari-Kari, just because he signed a bit of paper.

But apparently he is now getting cold feet that the great British public might revolt when they find out how much they are going to have to pay for his green preening. He believes the public will go along with his ludicrous ideas if the government simply levels with them:

“We need to level now with people about the trade-offs, the compromises and sacrifices, but also the benefits that can be secured through making change happen now.”

I have a rude surprise for the grossly out of touch Skidmore. The public will be absolutely furious with him and the rest of the political elite when they find out the truth.

They might even suggest he should have actually done the sums and told them how much it would cost them BEFORE he and his chums passed that Net Zero legislation.