One hundred and fifty year old pictures of corals are rare enough, but these ones had the unmistakable pure white cauliflower look that marks them as totally bleached. But in 1862 the first coal fired power plant was still twenty years away from starting work as a coral destroyer, and carbon dioxide levels were a perfect 286ppm.

This is the spot (below) in the Northern Red Sea just at the end of “The Little Ice Age”. Perhaps the seas were too alkaline then, and were yet to reach the perfect pH nirvana they must have struck the year before humans started scuba diving en masse. 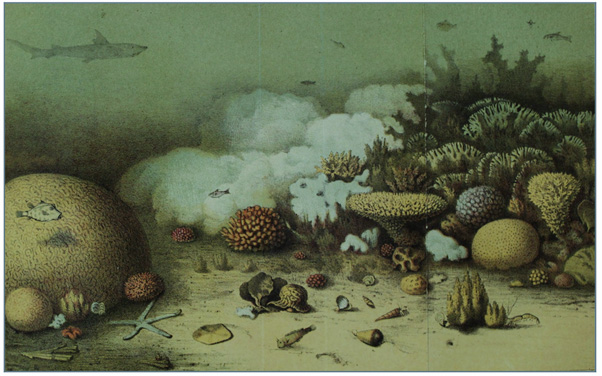 We can see why scuba diving was not popular in 1862. 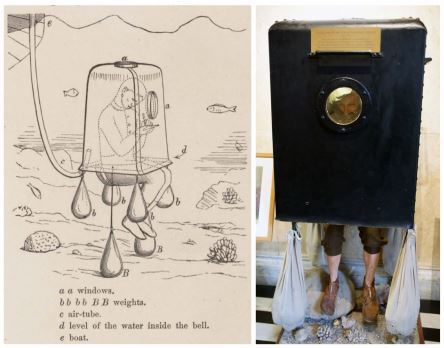 The first underwater camera had a little man inside?

Somehow the great marine-psychics of the world know that corals didn’t bleach in the early 1960’s even though, or perhaps “because”, there was almost no one down there to see it.

Reef-scientists often claim that coral bleaching is a new phenomenon that only started in the 1970’s due to climate change. But a remarkable new paper published by Tomas Cedhagen, of Aarhus University in Denmark has uncovered a very early lithograph showing bleaching in 1862.

There are actually many other early observations of bleaching, including by Sir Maurice Yonge in the first major science expedition to the Great Barrier Reef in 1929 (if you don’t count Captain James Cook’s scientific exploration of the reef in 1770). But Eugen von Ransonnet’s remarkable lithograph, taken from an incredibly crude diving bell, seems to be the earliest picture.

People arguing that bleaching is new might argue that the important point is that there was no MASS coral bleaching before the 1970/80’s. Von Ransonnet’s lithograph is evidence only of bleaching on a small scale.

This argument is incredibly weak for the following reasons.

(a) In order to observe mass coral bleaching, it requires a major monitoring effort designed to measure such a large-scale event. Before about 1970, there were very few marine biologists and no major institutions capable of doing such monitoring. Von Ransonnet, in his diving bell was certainly not in that position. Marine science is a very new discipline, so it is not surprising that the mass coral death events, and the huge coral spawning events were unknown to science until a few decades ago. The first proper aerial surveys were not carried out until 1998. And would anybody argue that mass coral spawning, that was only discovered in the early 80’s, never happened before that date.

(b) If a few corals bleached in 1862, or 1929 (Yonge), due to hot or cold water, why would we suppose that the same hot/cold event did not bleach corals elsewhere in the same region?

(c) On purely statistical grounds, large scale very hot events must have occurred before 1970. Perhaps not as frequently as today due to the warming climate, but they must have occurred. And its not as though the climate has got very much warmer in the last 100 years (from whatever cause). The reef water is at most just 1oC hotter. Major bleaching events must have occurred in the past unless you believe that all the corals on earth were precariously close to their upper thermal limit.

But despite this, Prof Hughes of JCU stated on ABC radio.

…a critical issue here is that these bleaching events are novel. When I was a PhD student 30 years ago regional scale bleaching events were completely unheard of. They are a human invention due to global warming.