Swiss journalist Alex Reichmuth reports on research that finds many more people die from cold than from heat.

“That’s why global warming may actually be saving lives, on the balance.”

One recent study by environmental epidemiologist Ana Maria Vicedo-Cabrera from the University of Bern and Antonio Gasparrini from the London School of Hygiene & Tropical Medicine in the scientific journal “Nature Climate Change” attributed 37% of the heat-related deaths to man-made global warming.

“We expect the proportion of heat-related deaths to continue to grow if we don’t do something about climate change or adapt,” lead author Vicedo-Cabrera claimed.

Many more die from cold

But what is usually overlooked is that cold claims many lives, writes Reichmuth.  “In winter, for example, there are always reports of frostbite victims. […] People who freeze to death because of cold are literally just the tip of the iceberg, however. […] In terms of numbers, people who die from the indirect consequences of cold temperatures are much more significant.”

Here, Reichmuth cites researcher Roland Rau at the Institute of Sociology and Demography at the University of Rostock in Germany, He told German n-tv television: “When it’s cold, the risk of both respiratory infections and cardiovascular disease increases. You have a 50 percent higher risk of dying from a respiratory disease in winter than in summer.”

Influenza is one example: 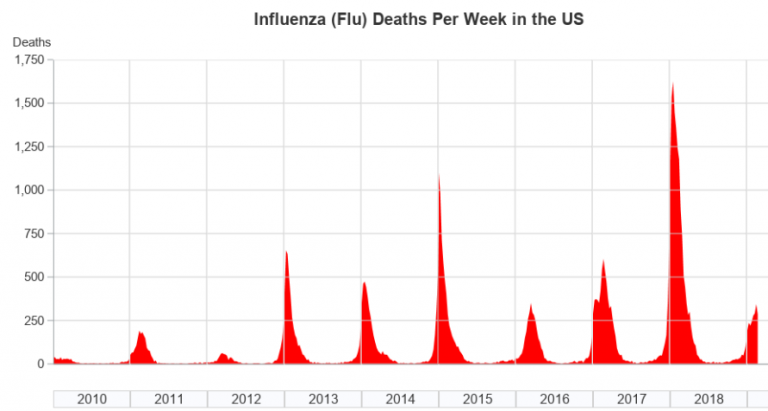 Cold also causes the blood vessels to constrict which can lead  to an increase in fatal thromboses and heart attacks. That’s why winter is “the real killer,” Rau said. “The highest mortality is measured every year in January, February and March. My own research has shown that mortality rates are 15 to 20 percent higher in those months than in the summer.”

According to this Lancet study: “Cold caused 17 times more deaths than heat in the 13 countries studied.” That means cold was responsible for only 7.29 percent of all deaths.

Researchers found what’s odd is that most deaths don’t occur where it’s extremely hot or cold, like Canada or Sweden, but rather winter mortality is higher in places where people just aren’t familiar with it and so “there is little preparation for temperature extremes.”

German scientists Fritz Vahrenholt and Sebastian Lüning came to the same conclusion in their book “Unerwünschte Wahrheiten – was Sie über den Klimawandel wissen sollten” (Unwanted Truths – What You Should Know About Climate Change).