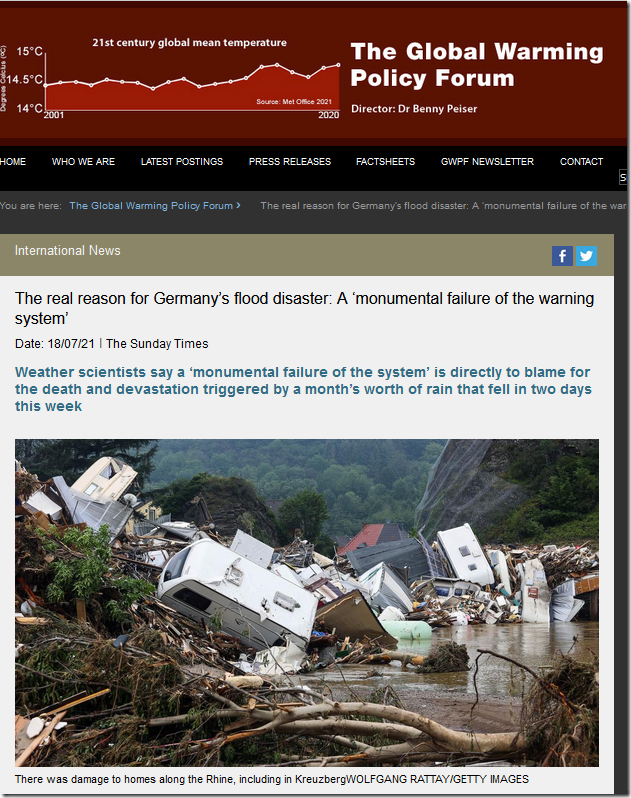 The first signs of catastrophe were detected nine days ago by a satellite orbiting 500 miles above the tranquil hills around the Rhine river.

Over the next few days a team of scientists sent the German authorities a series of forecasts so accurate that they now read like a macabre prophecy: the Rhineland was about to be hit by “extreme” flooding, particularly along the Erft and Ahr rivers, and in towns such as Hagen and Altena.

Yet despite at least 24 hours’ warning that predicted, almost precisely, which districts would be worst afflicted when the rains came, the flood still caught many of its victims largely unawares. A destroyed house in Altenahr, Germany. There is suggestion that the government was under-prepared for the disasterLINO MIRGELER/DPA/AP

Germany got its preparations “badly wrong”, one of the experts who built Europe’s sophisticated flood prediction model told The Sunday Times. Hannah Cloke, professor of hydrology at Reading University, said that a “monumental failure of the system” had led to one of postwar Germany’s deadliest natural disasters, which had by last night claimed at least 133 lives since Wednesday and left hundreds of people unaccounted for. At least another 24 people were dead across the border in Belgium, a figure that the country’s national crisis centre expected to rise, while the rains forced thousands from their homes in the Netherlands.

On Tuesday and Wednesday parts of Germany were deluged with more than a month’s worth of rain in 48 hours. Some tributaries of the Rhine swelled to record levels, turning cities into lakes of mud, sweeping away buildings and bridges, and drowning dozens of people in their homes.

“When I woke up [on Thursday] morning and saw how many people had died, I just thought: you can do better than this,” said Cloke. “I’m disappointed that particularly in the cities you had people washed away. That suggests that lots of things are going badly wrong.

“People should have been receiving warnings; people should have understood the warnings. It’s no use having massive computer models predicting what’s going to happen if people don’t know what to do in a flood.”

Instead, the overwhelming majority of people in the path of the floods carried on with their everyday lives, oblivious to the danger, as the waters began to rise.

The German government is now facing questions about how many lives might have been saved had it evacuated the danger zones in time and properly conveyed the gravity of the impending crisis to the public. As Bild, the country’s bestselling newspaper, put it: “Did our disaster protection agency fail?” […]

In the early 2000s Cloke and two of her colleagues designed the European Flood Awareness System (Efas) with a disaster such as this in mind. After the cataclysmic floods across central and eastern Europe in 2002, which claimed at least 110 lives in nine countries, they resolved that, next time, the victims had to be forearmed. “Given the number of deaths and the amount of damage, we had the idea that we should never allow this to happen again,” Cloke said.

The algorithms combine observations from the European Union’s Copernicus satellites with hydrographical records and readings of river levels in order to give national agencies up to ten days to prepare for the worst.

In 2014 alerts and maps from Efas allowed the authorities in Serbia, Bosnia and Croatia to fine-tune their response to colossal flooding in the Balkans. This time, however, Efas found itself playing the role of Cassandra.

It raised the alarm on July 10 — four days before the first floods — with warnings to the German and Belgian governments about the high risk of flooding in the Rhine and Meuse basins.

Over the next few days it produced minutely detailed charts correctly predicting most of the areas that would suffer the heaviest damage. Its German partner agency requested specific analysis of several rivers including the Ahr, along whose banks at least 93 people later died and 618 were injured.

Cloke said that some of the flash flooding would have been tricky to forecast in detail but there was “certainly time” to prepare larger towns and cities with warnings or evacuations. […]

“The fact that people didn’t evacuate or get the warnings suggests that something is going wrong,” Cloke said. “If you’ve got some information about what risk you’re at and you can understand it, you can take action to protect yourself. These floods were huge. Probably they were like a fantasy or a kind of science-fiction movie for people.”

One underlying problem is the parlous state of Germany’s alarm systems. Last September the BBK held a national “warning day”, when people across the country were supposed to be simultaneously deafened by sirens and inundated with alert messages in a simulated natural disaster. It was a debacle: most of the technology didn’t work.

As is often the case with this sort of devastating flooding, the crucial factor was that the weather systems got stuck in one place. The heaviest rain appears to have fallen in the Munster area, according to Weather Underground:

Although was extreme, these amounts were not records by any means. 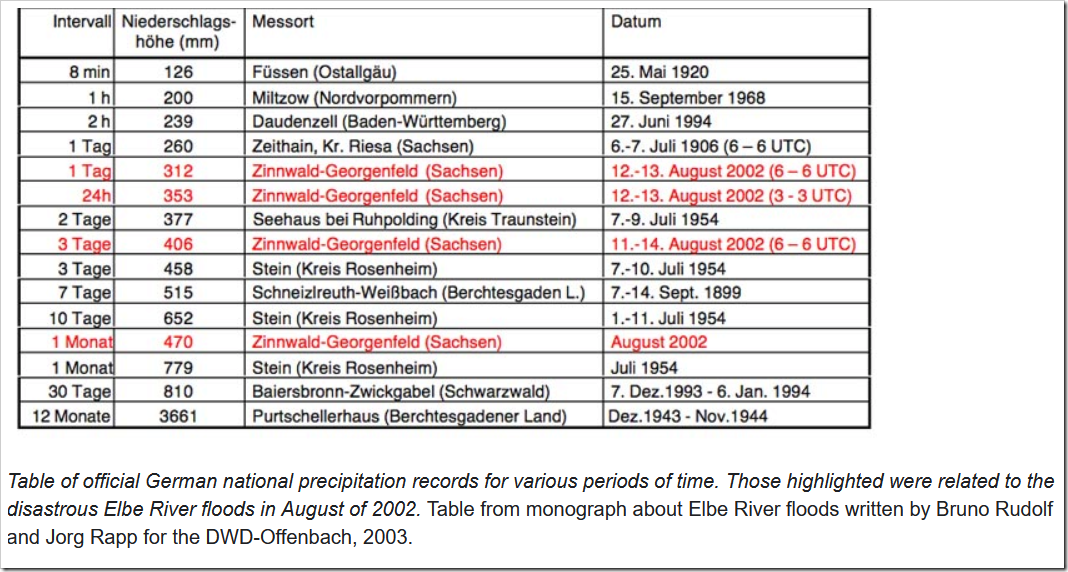 In my view, the authorities in Germany have been spending too much time playing as climate activists, and not enough doing their proper job.