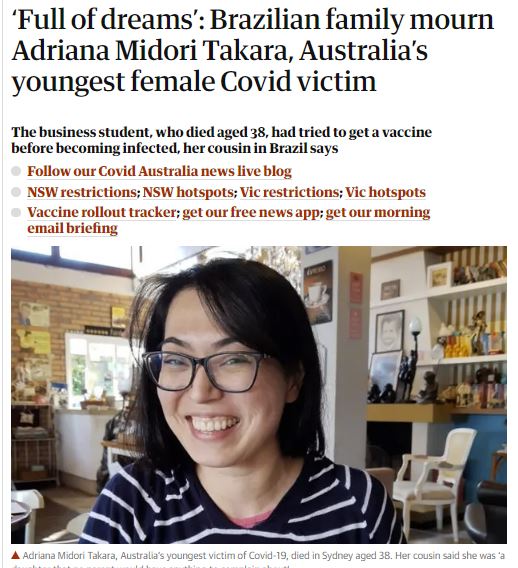 Adriana Midori Takara was only 38 when she died of Covid in Australia last week. She instantly became a posterchild for the vaccine advertising campaign. But the true story may be something else entirely. Rebecca Weisser treads where few dare:  Adriana’s family tried to get her ivermectin, which may have have saved her, but even though they found a doctor willing to try, he was not allowed to.

The Guardian and MSN both report relatives saying she wanted but had been unable to get any vaccine.  But Rebecca Weisser reports that other journalists heard she was vaccinated, and asked whether she had a vaccine dose but the authorities won’t answer that question. That little detail could turn everything about her story inside out.

This is the battle worth fighting for.

The fastest way to stop lockdowns is by allowing every doctor and patient the choice to use cheap antivirals. Ivermectin can be used prophylactically to prevent as many as 86% of infections. Vitamin D could also reduce the spread, the hospitalization and help get the state out of restrictions.

Premier Gladys Berejiklian must be getting desperate (the people of NSW are). If ever there was a time, surely it’s now…

Friends in the Brazilian community said that she had received her first jab just before she tested positive. Yet when a journalist told NSW chief health officer Kerry Chant that ‘Some people close to her are suggesting she had at least one dose of the vaccine,’ Chant replied that she’d have to check but she’d been advised that Adriana did not have any underlying health issues. It was an odd comment because Chant should be briefed on the vaccine status of every Covid victim since it is the first question that every journalist wants answered. Yet days later Chant has yet to confirm or deny Adriana’s vaccine status. It floats in the air like a spectral phantom.

McCullough contacted the Covid Medical Network who are set up to provide this therapy to every person in Australia who tests positive. One of the doctors was appointed by the family but by then it was too late. Adriana had been hospitalised and could not have been saved even if her doctor had been allowed to treat, which he was not, disregarding the wishes of her next-of-kin. Yet her doctor is adamant that had she received treatment at diagnosis, she would be alive today.

Doctors are legally allowed to prescribe ivermectin “off label” in Australia — Greg Hunt the Health Minister said so, but they need information and well informed, but determined patients.

Start with this one — the peer reviewed study: The Ivermectin Review:  It may prevent 86% of Covid cases.

My summary of Ivermectin

Ivermectin has also been used, with apparent success in India, Peru and Mexico (and so many other places). Covid cases fell in the states of India that approved Ivermectin use but rose in Tamil Nadu where it wasn’t permitted. Despite the success,  India’s Health dept suddenly stopped Ivermectin use again and people in India  are suing the WHO in disgust. In Peru, Ivermectin cut covid deaths by 75% in 6 weeks.