“The IPCC remains addicted to hockeysticks”

In the 6th dimension of Intergovernmental Climate Propaganda, which arrived last week, the long discredited Hockeystick is not just a sidenote, it’s the very first graph the IPCC uses in their Summary for Powerful people (the ones who make policy).

As per usual, hundreds of years of warmth has been retro-extinguished. Thousands of proxies around the world all apparently deviated from the real temperature and non-randomly in the same direction. Luckily the IPCC has found scientists  who can correct these simultaneous errors of proxiness which mostly they do by just tossing out the results they don’t like. They ignore series they don’t like, delete the years that don’t work for them, and flip that data upside down if they need to. And if that’s not enough they use trees that grow larger rings when CO2 is higher.

As Steve MacIntyre tells it the PAGES2017 data set winnowed down the thousands of proxies to their 692 favorite ones. In PAGES2019, instead of getting more data, they got less, and now there are only 257 proxies.

You might think they were the 257 longest or best proxies, but about 25% of the ones that made it through are short coral studies which often have steep rises in the last 50 years, but no information at all for the two thousand years before that. 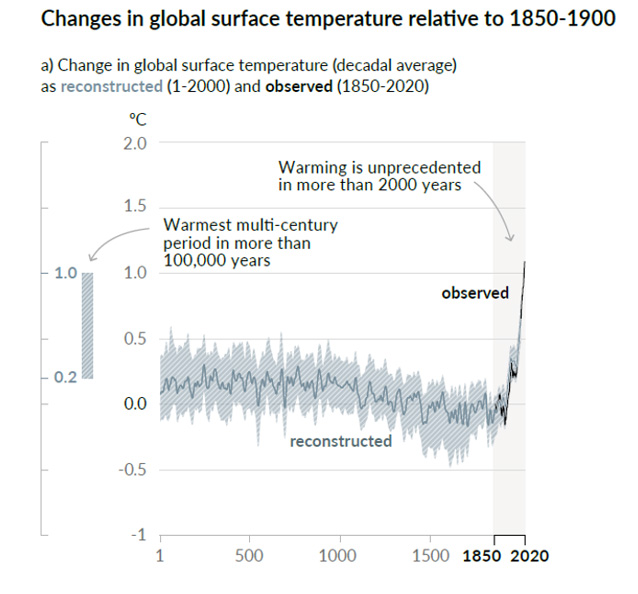 To give the average punter an idea of just how industrial-grade the cherry picking is, McIntyre picks a random assortment of proxy histories the IPCC filtered out in order to discover the modern Hockeystick marked in Red.

The Black graphs disappeared, the blue graphs lived on, and the red line is the politically correct history of the temperature on Earth. 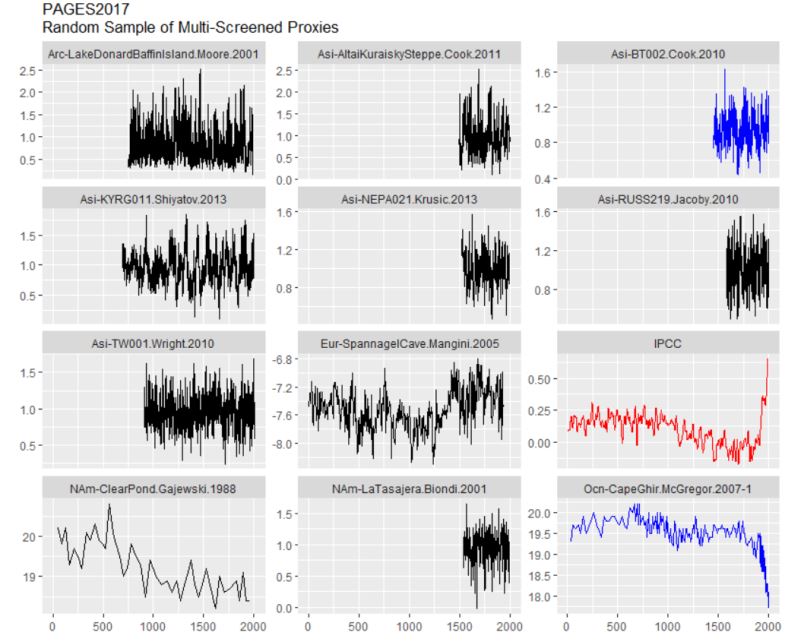 Curiously, Cape Ghir (bottom right) off Morocco actually has a hockeystick, but its one of unprecedented cooling. It’s an alkenone proxy, which McIntyre describes as being good for estimating ocean temperatures, and used so often they have boilerplate formulas to convert the values into temperatures. However this is clearly wrong, the IPCC heroes know the temperatures were rising (how could it be any other way?) so they flip the graph to “discover” the warming. Up is down, black is white, you know the drill, Winston. They’ve done it before.

And a quarter of the cherries that were picked were the brief coral studies which tell us nothing about the Medieval Warm Period:

They took “hide the decline” to extremes that had never been contemplated by prior practitioners of this dark art. Rather than hiding the decline in the final product, they did so for individual trees: as explained in the underlying article, they excluded the “divergent portions” of individual trees that had temerity to have decreasing growth in recent years. Even Briffa would never have contemplated such woke radical measures.

“…rather than excluding divergent series altogether,

we exclude only the divergent portions of these series.“

If you don’t like your data, you can delete your data.

See the bump around World War II in the top graph? It’s gone…

The warming around WWII was “divergent” from climate models and government grants. It was deleted.

By confusing cause with effect the stripbark pines are the ultimate tool to find warming at exactly the same time as CO2 rises.