Why is the BBC offering publicity to eco-loons like this one?

For Maggie Robertson, it was a long-haul flight to Texas that changed her mind about flying.

It was 2017 and she was having a great holiday. But then Hurricane Harvey came along – and she and her family narrowly sidestepped floods that cost more than 100 lives.

"That brush with natural disaster helped put things in perspective," she says.

Previously a regular flyer, visiting friends in Scotland and holidaying abroad, she says the penny dropped during that trip. And in the end, the decision was easy.

"It was a relief to say I’m not doing it any more," she says. "I knew that what I was doing wasn’t consistent with what I thought was right."

She is one of a small band of people who have found flying just too uncomfortable to contemplate any more.

Many more people are still boarding the planes, but wrestling with a growing sense of shame.

They now feel that their desire for a holiday in the sun or a far-flung adventure is playing a small but undeniable part in the growing crisis of extreme weather events, rising sea levels and melting polar ice.

Flying is only responsible for around 2% of global emissions. That may not sound much, but if you are a flyer, it’s a much higher proportion of your own carbon footprint. That’s because more than 80% of the world’s population never fly at all.

One flight from London to New York emits around 1.3 tonnes of carbon according to the offsetting organisation Atmosfair. Other organisations offer lower estimates, but even if you eat vegan and cycle everywhere, you’d struggle to make up for the emissions from a return trip, according to research from the Centre for Research into Energy Demand Solutions, which last year calculated how individuals could reduce their annual carbon footprint. 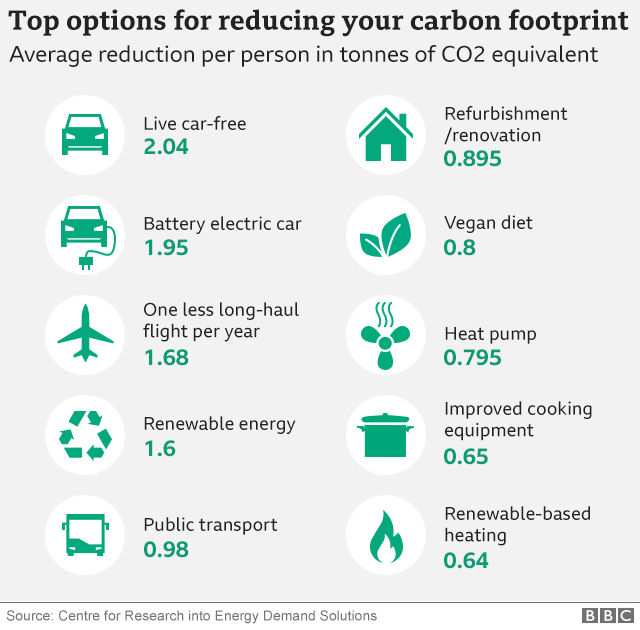 Will Maggie Robertson give up her obviously very well off lifestyle? Will she go and live in a yurt and knit yoghurt? No, thought not!

And how does the BBC know that “many more people are still boarding the planes, but wrestling with a growing sense of shame”? Has the reporter gone to an airport and interviewed all the happy families off on their holidays?

The report then goes on to quote another “eco-expert”

"The industry has got a clear plan to decarbonise aviation, and there are a lot of opportunities and proven technologies that can do that," says Andy Jefferson, programme director at an organisation called Sustainable Aviation, which works on behalf of the government and the industry, including manufacturers and airports.

"Part of the solution will be the evolution of existing types of aeroplanes, as each time they come online, they’re in the region of 15% to 20% more efficient and better than the aircraft they’re replacing," he says.

In addition, things such as making sure a plane doesn’t carry more fuel or water than it needs, not maintaining planes in holding patterns as they wait to land, and keeping the engines well-maintained to ensure they operate efficiently, can all make flying greener.

Has it not occurred to him that the airline industry spends its life trying to make aircraft more fuel efficient, as fuel is a major cost component. As planes get more efficient, however, more people want to fly. Whatever a lobbyist from Sustainable Aviation or some potty bimbo with a guilt conscience have to say, the rest of the world will carry on flying around the world.

There is though a very pointed comment about carbon offsets:

But offsetting is controversial. In fact, Mike Childs, Friends of the Earth’s head of policy, describes it as "the greatest con on Earth".

"They’re trying to pretend that your emissions don’t count because you can offset, but the offsets aren’t real, they don’t last, they’re not permanent."

Nowhere in the article is there any comment at all to counter this eco-nonsense. Par for the course for the BBC, you might say!.