Most of Australia is living with freedom, not the virus. “Living with the virus” means long lockdowns in NSW. Who wants that?

The Australian Federal government wants to “open up the nation” when we reach 70 or 80% vaccinated, like it’s The Sign of Bethlehem, or something, but the No-Covid States are rebelling and it’s no wonder. Being free of Chinese Bioweapons means being free to dance, sing, work and send the kids to school — and the voters rather like that. No virus means no lockdown. The States with zero covid know that if they let the virus in even at 80% “vaxed” they’ll have less freedom. They might get to fly to London but they’ll have to give up Big Weddings, Parties, and possibly Grandpa too. The key value is and always was hospital beds. The hospitalization rates mean even at the magical 80% double-vaccinated mark hospitals will be overwhelmed, forcing states to flatten the curve for months and stand in the street banging tin pots at 9pm each night to say thanks to strung out health workers. We don’t need modeling to know this, it happened already in places like the UK, Spain and Italy. It only took a few percent of the population to get infected and hospitals were overwhelmed.  It’s just maths. There are 12,000 active cases in Sydney now  — so a mere 0.15% of the NSW population is infected, but hospitals are already running out of beds.

These first generation vaccines are not remotely good enough. Even most of the pro-vax modelers admit we have to vaccinate more 90% of the whole population (really 95%, they say) and in that scenario, there are still thousands of deaths and ongoing restrictions. If the vaccines stopped transmission it might be different. But the leaky sort only halve it (see Table 3 below). Even the 100% vaccinated cruise ship still spread the virus.

If States-with-Freedom open borders to States-with-lockdowns, the lockdowns will spread, not the freedom.

Before we open up we need a better plan than purist vaccination.

The solution is profoundly right wing: it’s hard borders, state rights, free speech and free choice — the right to pick the treatment we want with our doctor. But bizarrely, at the moment, the conservative party in Australia has become the best friend of Big Pharma and Big Bureaucrats while The Labor Premiers are fighting for hard borders and state rights.

Relying on first generation vaxes without antivirals is a train-wreck.

It’s almost like Scott Morrison and Gladys Berejiklian like lockdowns. Judge them by the outcomes, not their words. How many billions of dollars lost, deaths, and broken businesses will it take for them to investigate the bargain vitamin and out-of-patent drugs that have saved thousands in the third world? Instead, they’re trying to sell us on a scheme that might have been written by Big Pharma itself.

Morrison must be frazzled, calling West Australians and Queenslanders “cave dwellers,” because they have not ram-vaccinated as many people as disaster-land-NSW. With insults and a totally Sydney-centric perspective, he may have just handed the next national election to Labor. Were the Liberals hoping to win any seats in WA? Did the Liberals learn nothing from their humiliating WA state election loss?  The only thing that might save his government is that Federal Labor is just as bad.

There is a battle of models going on as various Governments in Australia try to figure out what to do next. All of these models start from the one-eyed Vaccines-Will-Save-Us-Kemosabe! point of view. But it’s eye opening to follow the calculations which mostly show that opening the nation at 70 or 80% vaxed is reckless. The only model that doesn’t is the Doherty institute’s, and it’s a fantasy model. But that’s the one Scott Morrison is betting the house on. All the models assume there is no other treatment and no one does anything to raise Vitamin D or Zn levels. So all the models are flawed, but we can still learn something from them.

The Grafton ANU modelling concludes that the toll from playing games with novel viruses could be quite high:

“And assuming 80 per cent vaccination coverage for only those over 16, as per the National Plan, there could be approximately 25,000 fatalities and some 270,000 cases of long COVID.

Buried quietly is modelling from The Burnet Institute, which suggests that fully 45% of these deaths will be among the vaccinated population. There are three million Australians older than 70. Even if we vaccinate 95% of them, and even if the Pfizer vaccine protects 96% of that group, there are still potentially a lot of dead bodies in that age group in the wake of the virus. (And the AZ vaccine only stops 92% of deaths.)

No one wants to copy the pain that the people of NSW are going through. Who can blame the smaller states? We almost suspect that what Berejiklian and Morrison are most afraid of is that clean states will show how wrong and incompetent the NSW approach is.

What if the ACT, Victoria, or New Zealand get back to zero? Won’t that make the “gold standard” state look like chumps.

The Doherty team models a different virus in an imaginary world

In a fantasy simulation the Doherty group pretend we start with only 30 cases, which is about 900 cases lower than NSW already has. They assume we can manage to track and trace them, which has already failed in NSW (test results are slow, and tracers are not even phoning infected people for a couple of days!). The Doherty model pretends that children don’t spread the virus much, and only runs the simulation for the first six months. It’s like they set out to show the nation can open at 70-80%, and made up the assumptions to achieve that.

In the fine print the Doherty group also assumes the Ro (rate of spread) is reduced from an awesome 6.3 down to 3.6. That means they also assume many ongoing restrictions are in place to halve the rate of spread. Presumably that means Australia can kiss goodbye to football finals, concerts, festivals, big weddings and funerals, and “live with” ongoing masks and lots of distancing. This is a Big-Pharma version of freedom, where we live with death and the last 20-30% of the population are put under major pressure to get vaxed or to hide from public life. How much fun can you have? Booster shots, baby! Big Pharma know that if the nation opens up at 80% the headlines will be full of stories of loss and deaths and reasons to push the last 20% towards an injection.

Here’s a table we rarely see. There are a lot of caveats –see below.

Deaths may be higher because…

Deaths may be lower if…

Vaccines assumed to stop half of transmission:

Though if the Israel data applies to all cohorts, after 6 months, VE of infection is 0.16 and presumably OR (Transmission) must be less too.

Even 80% vaxed is not enough for Australia to live free

Under the National Plan, once more than 80 per cent of adults receive two doses of COVID-19 vaccines, equivalent to approximately 65 per cent of the total population, the nation will “manage COVID-19 consistent with public health management of other infectious diseases”.

Professor Grafton said the new modelling showed “we simply can’t afford to do that, both in terms of lives and long-term illness from COVID”.

“We found substantial morbidity and mortality is likely to occur if the Australian Government sticks to the National Plan,” he said.

“Our modelling shows if 70 per cent of Australians over 16 years of age are fully vaccinated, with a 95 per cent vaccination level for those aged 60 years and over, there could eventually be some 6.9 million symptomatic COVID-19 cases, 154,000 hospitalisations, and 29,000 fatalities.

“And assuming 80 per cent vaccination coverage for only those over 16, as per the National Plan, there could be approximately 25,000 fatalities and some 270,000 cases of long COVID.

“Children also directly benefit from vaccination. If we could achieve 75 cent vaccination coverage among children and adolescents, we could prevent 12,000 hospitalisations in these age groups.”

Grafton conclusions are to Triple vax the over 60s and vax all the kids?

The Grafton team are essentially saying we need to vaccinate at least 90% of all Australians including children to consider opening with a lower death rate. They assume that 95% of the over 60s are vaccinated, and even consider doing this with two doses of AZ plus the Pfizer booster shot to maximize protection. But even with all that  vaccination, the death rates are still too high unless children are vaccinated too. Even under this scenario, with “only” 70% of Australians vaccinated and the over 60’s “triple vaxed,” they estimate there will still be  nearly 30,000 deaths and nearly 300,000 with long Covid.

Nearly half of the deaths will be in the vaccinated.

Readers may well disagree with the conclusions, but the modeling and assumptions and references are all there to discuss. (See the links below).

Nearly 7 million Australians will get symptomatic infection — which still means some significant productivity hit to workers and students, even if “it’s like the Flu”. We can bear that, but do we have to? 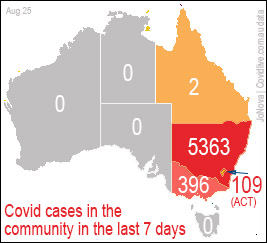 Locally acquired cases in each Australian state for the last seven days.*

Is it worth it?

All these deaths, the sickness, and the experimental vaccines is to allow us visit friends overseas, and let in tourists to help our tourism industry. It also means Qantas can make more money, and we can accept mass immigration that most Australian don’t want (and which pushes down blue collar wages, and pushes up house prices). It also means we can take in Chinese paying students to universities. “Yay”.

Obviously the West has totally failed to stop the Chinese Bioweapon. It is now a given that we’ll all get it or one of its descendants eventually. But there is a huge difference between getting this mutation now — without any respectable approved treatments and with 30,000 deaths — and getting a different mutation a year from now — with a suite of antivirals and / or the second generation of vaccines (which might be so much safer). Monoclonal antibodies may make travel possible without a vaccine. So may a combination of antivirals, like the way we treat AIDS. The next mutation may get nicer like Spanish Flu did, or it might not.

What they are trying to do is distract Australians from the real debate, which is about borders and antivirals.

The modelling from Professor Grafton, Dr Hyde and Professor Kompas is available online as a pre-print publication. Read an analysis article by the three researchers about their findings and proposed four-step national COVID-19 response at Policy Forum.

*Said with hubris and subject to change. Potentially any day.

PM Scott Morrison is relying on the Doherty Modelling which

The illusory Herd immunity will be almost impossible to reach with the vaccine-purist approach.