Re-post from the Heartland Institute:

Over the weekend Google news heavily promoted a story on CNN, titled “How the climate crisis is changing hurricanes,” which claimed human caused climate change is making hurricanes worse. This is false. Real-world data show during the recent period of modest warming, hurricanes have neither become more frequent or more severe.

“In the same week that Tropical Storm Fred caused catastrophic flooding in North Carolina, and Hurricane Grace made its second landfall in Mexico, Hurricane Henri is barreling toward New England, where it’s expected to be the first to make landfall there in 30 years,” writes CNN.

This is yet another example where climate alarmists in the mainstream media are following former White House Chief of Staff Rahm Emanuel’s admonishment to Democratic Party leaders to “never let a crisis go to waste.” In fact, although Henri briefly attained Hurricane 1 level strength over the Atlantic Ocean for less than 24 hours, by the time it made landfall in New England it was diminishing tropical storm. The last hurricane to strike New England was Bob in 1991, 30 years ago. As a result, at present, despite modest warming New England is currently experiencing the second longest period in recorded history without a hurricane making landfall in the region.

“Hurricanes — also called tropical cyclones or typhoons outside North America — are enormous heat engines of wind and rain that feed on warm ocean water and moist air. And scientists say the climate crisis is making them more potent,” continued CNN. “The proportion of high-intensity hurricanes has increased due to warmer global temperatures, according to a UN climate report released earlier this month. Scientists have also found that the storms are more likely to stall and lead to devastating rainfall and they last longer after making landfall.”

Data from the U.S. Environmental Protection Agency and the National Oceanic and Atmospheric Administration’s National Hurricane Center (NHC) show hurricanes have neither become more numerous or more powerful during the past half-century of modest warming.

“Since 1878, about six to seven hurricanes have formed in the North Atlantic every year. Roughly two per year make landfall in the United States. The total number of hurricanes (particularly after being adjusted for improvements in observation methods) and the number reaching the United States do not indicate a clear overall trend since 1878.”

EPA’s conclusion that hurricanes have not become more numerous in recent years is unsurprising, because, U.N. Intergovernmental Panel on Climate Change (IPCC) 2018 interim report came to essentially the same conclusion. As illustrated in figure 1 below, IPCC data demonstrates no increasing trend in tropical cyclone or hurricane numbers. 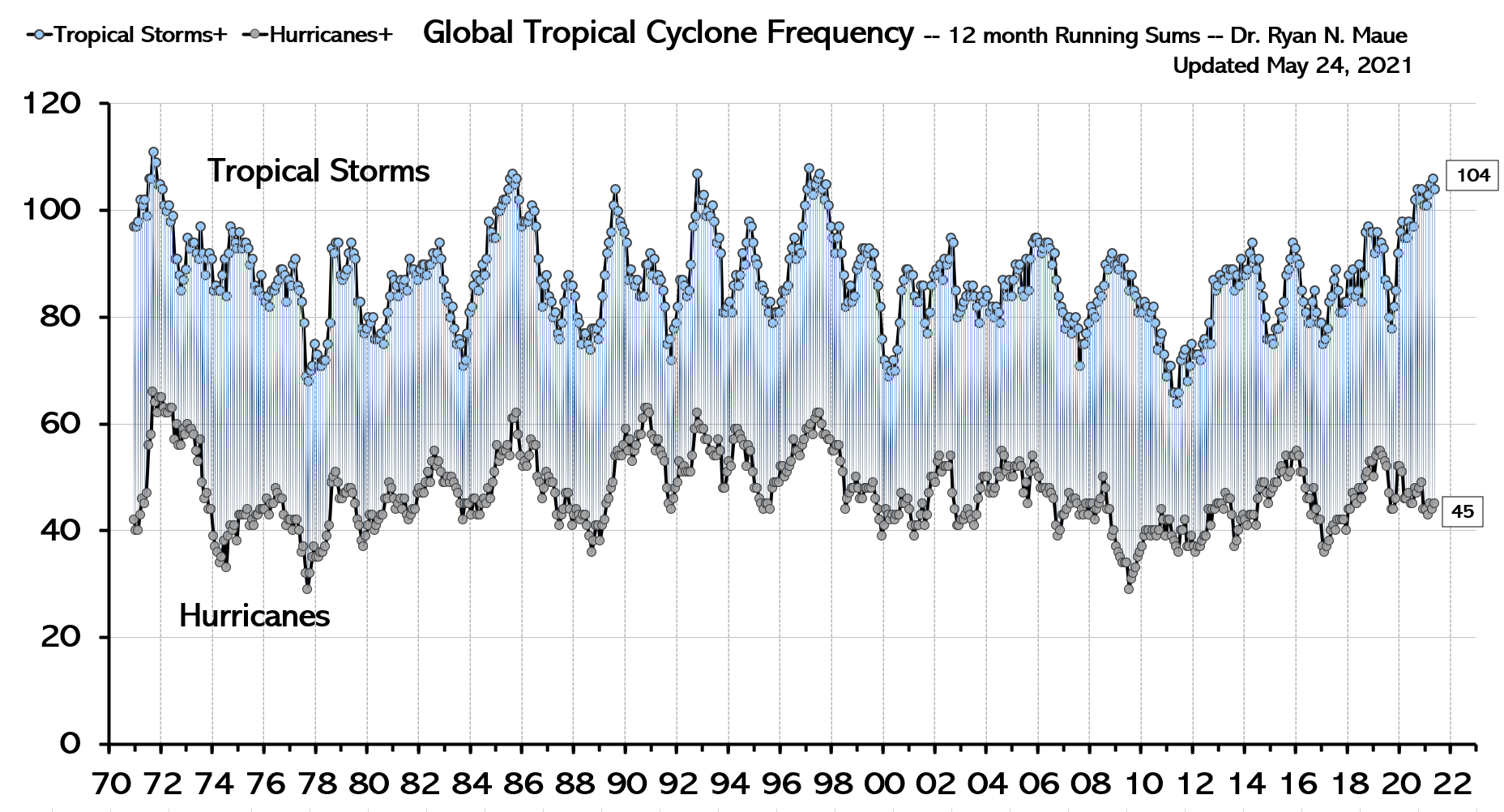 NHC data indicate hurricane impacts on the United States are at an all-time low. The United States recently went more than a decade, 2005 through 2017, without experiencing a major hurricane measuring Category 3 or higher, making landfall—the longest such period in recorded history.

This can be seen in Figure 2 below showing the large gap with no major landfalling hurricanes (Category3 or greater) in the U.S. on the right-hand side. 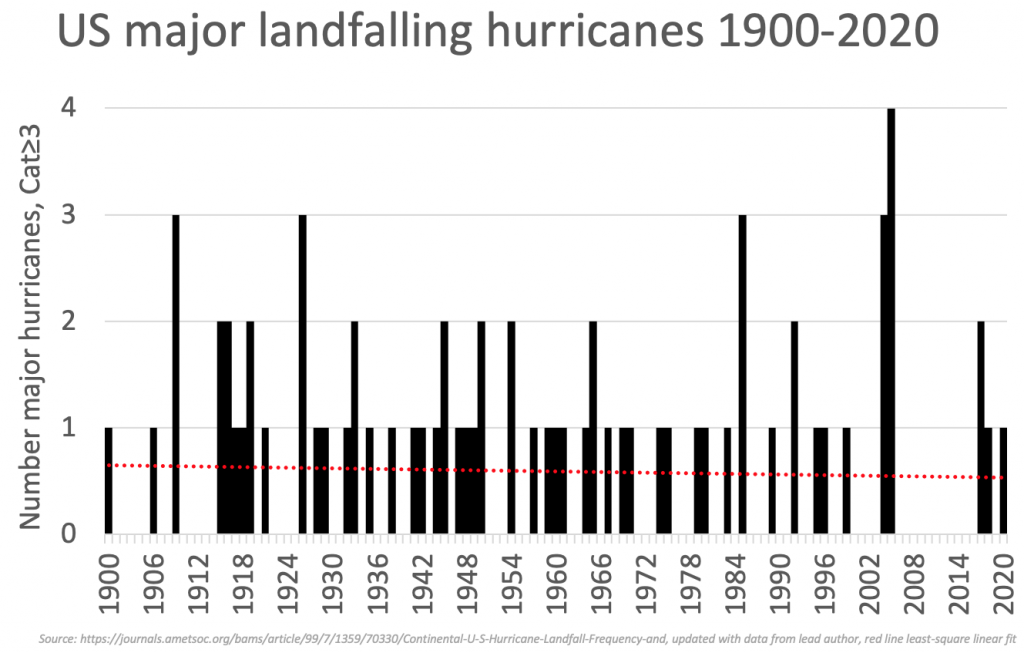 Also from 2009 through 2017, the United States experienced the fewest number of hurricane strikes over any eight-year period, since records have been kept.

As explained in Climate at a Glance: Hurricanes, warm ocean water is just one factor driving the formation and intensification of hurricanes. Wind shear inhibits strong storms from forming and rips apart storms that have already formed. Science indicates global warming is likely to cause more wind shear in places where hurricanes form and intensify. This is precisely what happened to Henri, with wind shear shredding its top reducing it from a minor hurricane to a tropical depression if a relatively short period of time.

Evidence tropical cyclones are unlikely to become more severe in the future also comes from recent study published in the peer reviewed journal, Geophysical Research Letters. Its authors report that, after accounting for the combined size and maximum wind speeds of hurricanes—storms’ “kinetic energy”— climate models project no measurable worsening of future hurricanes if the earth continues to warm.

“Comparing cyclone integrated kinetic energy between present conditions and a projected future climate scenario did not suggest notable changes between the two periods,” say the researchers.

The IPCC’s recent AR6 report says relatively little about hurricanes and tropical storms, but what it does say is highly uncertain or equivocal.

Reporting on trends in tropical storm numbers and intensities on page 58 of Chapter Eight of AR6, IPCC does not report anything has changed since it wrote in AR5, the organization had “low confidence in centennial changes in tropical cyclone activity globally, and in the attribution of observed changes.” This directly contradicts CNN’s claim that AR6 reports hurricanes are becoming more intense due to human climate change.

Based on “limited evidence,” AR6 says it has “medium confidence,” that tropical storms may be dropping more rainfall on land because the speed with which tropical storms are travelling may be slowing somewhat.

This claim is far from definitive and certainly doesn’t merit CNN staking its reputation on by claiming scientists have definitively determined slow travelling hurricanes are dumping more rainfall on land. No such certainty appears in IPCC AR6.

Interestingly, from July 9 to August 11, during the middle of the annual hurricane season, the Atlantic Basin experienced a more than month long lull of tropical storms, when not a single tropical storm formed. Where were the reports from CNN and other mainstream media outlets linking this unusual tropical storm drought to climate change?