The FDA has launched a marketing program to rebrand the Wonder Drug from Japan as just a horse paste and thus bury the 3.8 billion doses given to very non-horsey humans, many of whom were in Subsaharan Africa. On another day this would be a hideously racist. When do 200 million Africans count for nothing?

The FDA may hope to save people from self-medication accidents, but will regret telling a half-truth-soup and burning up more of what’s left in their trust-bucket. After all, they want the public to trust them with their lives, but it only takes one eye opening conversation to undo years of propaganda. If the FDA are not mentioning that something like 200 million humans use Ivermectin each and every year — what else are they hiding? That it won a Nobel Prize and costs $1 a day?

The FDA and the Guardian and co, are training readers to mock anyone who even asks about Ivermectin. It’s the old Argumentum By Derision again. The tool of bullies, not scientists.

Martin Pengelly at The Guardian got the message the FDA was sending:

Ahead of full US authorisation of the Pfizer coronavirus vaccine, the federal Food and Drug Administration (FDA) had a simple message for Americans contemplating using ivermectin, a medicine used to deworm livestock, instead of getting a Covid shot. 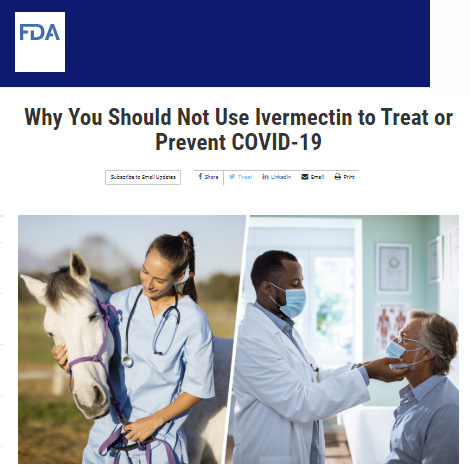 The FDA is going Double or Nothing — not to save American lives, but to save their own reputation.

The FDA’s job is to carefully evaluate the scientific data on a drug to be sure that it is both safe and effective for a particular use, and then to decide whether or not to approve it. Using any treatment for COVID-19 that’s not approved or authorized by the FDA, unless part of a clinical trial, can cause serious harm.

Given their job is to evaluate scientific data, the FDA doesn’t give any of the sort of reasons we’d expect it might do. They don’t say ivermectin is ineffective, doesn’t work, binds to the wrong part of the virus, stops antibody production, doesn’t reach the tissues it needs too, or anything like that.

They can’t say that, because apparently they haven’t looked:

“The FDA has not reviewed data to support use of ivermectin in COVID-19 patients to treat or to prevent COVID-19; however, some initial research is underway.”

How good do we feel about that? 644,000 Americans have died so far, but the FDA hasn’t found the time in the worst pandemic of the last 100 years to even organise the research?

The Frontline Covid-19 Critical Care Alliance of Doctors feels the FDA is being misleading.

They agree that people should talk to their doctor and not take medicines designed for animals —  but point out that there are 40 medical trials world wide that show it is safe and effective, and 10-20% of all drugs in the US are prescribed “off label”.

“Due to its extensive record of safe use, medical professionals can feel confident about
prescribing Ivermectin,” said Dr. Pierre Kory, president and chief medical officer of the FLCCC. “In the 40 years since it was first approved for use, more than 3.8 billion people have been treated
For more information about the FLCCC Alliance, the I-Mask+ Prophylaxis & Early Outpatient Treatment Protocol for COVID-19 and the MATH+ Hospital Treatment Protocol for COVID-19, please visit http://www.flccc.net  with an average of only 160 adverse events reported per year.  This is a  better safety record than several vitamins.”

Here’s What You Need to Know about Ivermectin

Medicine delayed is medicine denied. It doesn’t have to be this way.