The War on Ivermectin continues: 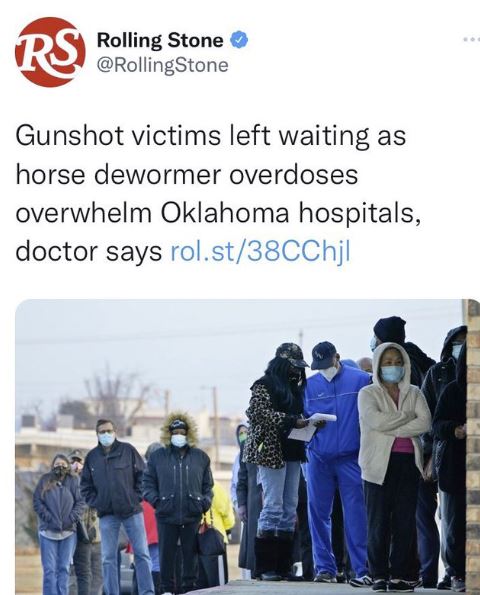 After news spread that Joe Rogan took ivermectin for Covid the legacy media “discovered” (in the magical sense of the word) that people were overdosing on it. It was so awful that gunshot victims had to wait for treatment and people were going blind.

“Some people taking inappropriate doses have actually put themselves in worse conditions than if they’d caught COVID.”

“The scariest one that I’ve heard of and seen is people coming in with vision loss.”

It was such perfect Psy-Ops against ivermectin it’s like it could have been written by a Hollywood studio. Within a day it turned out to be fake news. RollingStone got the hot quotes from Doctor Jason A. Mcelyea, who is affiliated with two hospitals in Oklahoma.  One of the two, NHS Sequoyah, went so far as to issue a statement which basically said he hasn’t worked at the hospital in the last two months, and far from there being a queue of blinded people vomiting up their ivermectin, there was not one, as in zero, patients:

Our hospital has not had to turn away any patients seeking emergency care.

The hospital even changed its home page to make sure people got the message.

There are a lot of other hospitals in Oklahoma where gunshot victims might have laid waiting for hours, but Zero Hedge reports that according to the Oklahoma Centre for Poison and drug information the total number of Ivermectin poisonings reported in the whole state in the last four months was eleven.

Zero Hedge also phoned the other hospital that Mcelyea worked at, and all they got was a laugh, “the gentleman who answered the phone sounded quite amused. ”

So this was a slap in the face to Rolling Stone

It’s a legendary fail in journalism. The illustrious pop culture review magazine hadn’t even bothered to make one phone call to check the veracity of anything before going to press. It was grovelling apology and retraction time. Instead, Rolling Stone called it an “Update” and added:  “Rolling Stone has been unable to verify any such cases…”

It’s one of the longest, most uselessly ambiguous headlines you can read anywhere. If I tell you not to think of Pink Elephants, what animal are you thinking of? 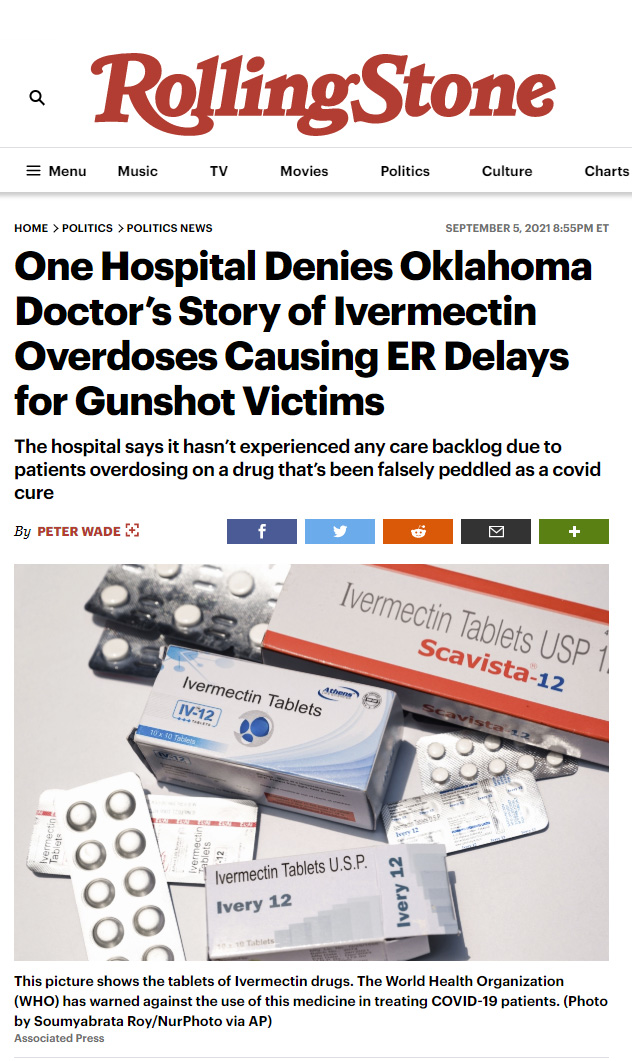 Robby Soave at Reason.com  lists the global news pile on and points out just how ugly this was. The deplorables were not just fools risking their own necks, they were wrecking hospitals for everyone as well:

It was quickly picked up by national news outlets, such as Rolling Stone, Newsweek, and the New York Daily News. Numerous high-profile media figures, including MSNBC’s Rachel Maddow, tweeted about ivermectin overdoses straining Oklahoma hospitals—the implication being that the right-wing embrace of a crank COVID-19 cure was dangerous not only for the people who consumed it but for the stability of the entire medical system. It was a story that appeared to confirm many of the mainstream media’s biases about the recklessness of the rubes.

Insider, Newsweek,  and The Guardian “updated” their articles (somewhat). The New York Daily News has not.

It was all confirmation bias writ large and moving at the speed of cut-n-pasting.

Strangely Twitter has not banned any of the guilty parties, nor slapped warnings about disinformation on any of their accounts.

Rolling Stone added that there were 459 cases of ivermectin overdoses in the entire US in August according to the National Poison Data System. It sounds like a lot but since there are 6,000 hospitals in the US, that means each hospital might see one ivermectin overdose over the course of a whole year. It’s probably not the cause of too many delays with gun victims.

But if people are overdosing on veterinary products, that means that something is going terribly wrong in the US Health system (and other nations too). Millions of people have no faith in their medical system. If patients could get prescriptions for treatments they have confidence in, there wouldn’t be this problem.

The solution we all want is for doctors to be able to prescribe the medicines they think are most appropriate, and to be able to speak their minds freely.

Talk to your GP. Give them information. Find protocol suggestions on the FLCCC.

Reason.com has the most detailed description of the whole incident.

The story started on a local radio station” KFOR on Sept 1.