Peter Boghossian has taught philosophy at Portland State University for ten years and he has just quit in protest. 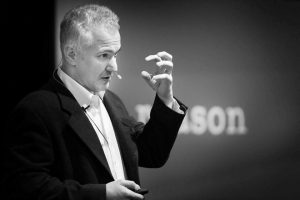 He fought against Woke ideology. He helped write hoax papers to expose how meaningless peer review is and exposed students to politically incorrect speakers to hone their powers of reasoning. For that he has been subject to extraordinary vilification, inquisitions, and a campaign of disruption. His students were interviewed to find instances of “discrimination” and the investigators even asked them if they knew anything about him “beating his wife and children”, fueling rumors that he was a violent misogynist. He was given no right of reply. It’s character assassination by any means possible. The University did nothing to stop it.

Even petty methods were used to silence and intimidate him. Fire alarms interrupted an interview, bags of faeces were delivered, and speaker wires were pulled out during a live panel discussion.  This reminds me of stories of how the Chinese Communist Party targets dissidents overseas with petty disruptions like having minions bang pots and pans in alleys to wake them in the dead of night.

It’s almost like the CCP runs the universities of the West.

My University Sacrificed Ideas for Ideology. So Today I Quit.

…brick by brick, the university has made this kind of intellectual exploration impossible. It has transformed a bastion of free inquiry into a Social Justice factory whose only inputs were race, gender, and victimhood and whose only outputs were grievance and division.

Students at Portland State are not being taught to think. Rather, they are being trained to mimic the moral certainty of ideologues. Faculty and administrators have abdicated the university’s truth-seeking mission and instead drive intolerance of divergent beliefs and opinions. This has created a culture of offense where students are now afraid to speak openly and honestly.

Fear and silence is the motto of higher education:

The more I spoke out about these issues, the more retaliation I faced.

Early in the 2016-17 academic year, a former student complained about me and the university initiated a Title IX investigation.  (Title IX investigations are a part of federal law designed to protect “people from discrimination based on sex in education programs or activities that receive federal financial assistance.”) My accuser, a white male, made a slew of baseless accusations against me, which university confidentiality rules unfortunately prohibit me from discussing further. What I can share is that students of mine who were interviewed during the process told me the Title IX investigator asked them if they knew anything about me beating my wife and children. This horrifying accusation soon became a widespread rumor.

With Title IX investigations there is no due process, so I didn’t have access to the particular accusations, the ability to confront my accuser, and I had no opportunity to defend myself.

The investigation found only that there was “insufficient” evidence and recommended he “get coaching”. But the process is the punishment. Who wants that kind of acidic work environment?

… in 2017, I co-published an intentionally garbled peer-reviewed paper that took aim at the new orthodoxy. Its title: “The Conceptual Penis as a Social Construct.”

Shortly thereafter, swastikas in the bathroom with my name under them began appearing in two bathrooms near the philosophy department. They also occasionally showed up on my office door, in one instance accompanied by bags of feces. Our university remained silent. When it acted, it was against me, not the perpetrators.

Meanwhile, ideological intolerance continued to grow at Portland State. In March 2018, a tenured professor disrupted a public discussion I was holding with author Christina Hoff Sommers and evolutionary biologists Bret Weinstein and Heather Heying. In June 2018, someone triggered the fire alarm during my conversation with popular cultural critic Carl Benjamin. In October 2018, an activist pulled out the speaker wires to interrupt a panel with former Google engineer James Damore. The university did nothing to stop or address this behavior. No one was punished or disciplined.

Is there any better reason to just cut academic funding from any institution that doesn’t endorse free speech?