At the end of last week, I came across a SolarQuotes article about Snowy Hydro 2.0 being more expensive than batteries. Snowy Hydro 2.0 is a pumped hydro project in Australia (New South Wales and Victoria) and is currently under construction. The brunt of the article is that pumped hydro is too expensive compared to (grid sized) batteries and makes the plea to halt the project in favor of batteries.

That was new to me. As far as I know, pumped hydro is the cheapest way of dispatchable backup in order to counter intermittency and definitely cheaper than batteries. Yet, the author of this article argues that it is the exact opposite.

With that in the back of my mind, I expected some trick(s) to be performed in this one too.

The article starts with a general overview of the Snowy Hydro 2.0 project. It is an expansion of the current Snowy Hydro project, connecting two existing dams (Tantangara and Talbingo). This expansion would allow for the closure of two gigawatts of coal capacity. I would expect that, for this reason alone, he would like the project, but that isn’t the case. Brakels not only objects to it from a financial standpoint, but it is clear from the intro of the article that he doesn’t like the project at all.

Brakels starts off by badmouthing the CEO of the project . He calls him “incompetent” because he doesn’t know how long the connecting tunnel between the two dams is. He found on the Snowy Hydro 2.0 website that the two dams are connected with 27 km of tunnels. This is the quote that he used in the article:

Brakels now claims that this is not true. He makes the claim that in reality it is only 24 km and that the 27 km figure is the total length of all tunnels, including a 2.6 km exploratory tunnel. Even if that would be true, it is no reason to call someone incompetent.

I did however find an interview of the CEO of the company that will excavate those tunnels in Engineering News-Record. This is how the length of the tunnel was detailed (my emphasis):

A roughly 17-km-long headrace tunnel from the high level Tantangara reservoir will lead to a 550 m drop into a planned power house, which will be excavated about 1 km below ground. From the powerhouse and transformer halls, both about 190 m long, water will flow though a roughly 10 km tailrace tunnel to Talbingo.

They also have an illustration with a cross-section of the tunnels (my annotations in red font): 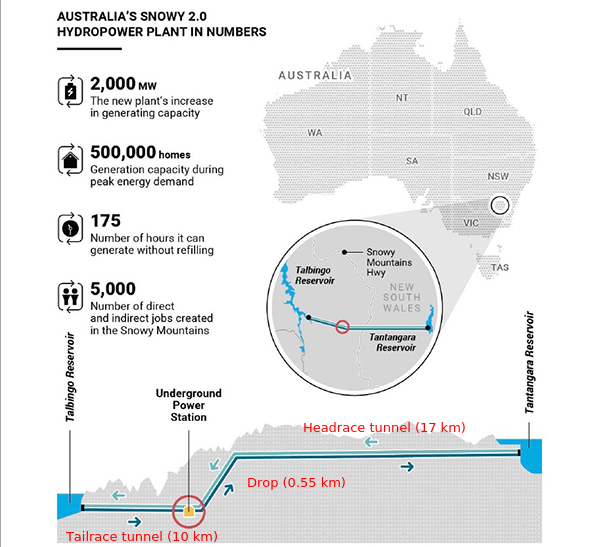 Unless the CEO of this company also doesn’t know the length of those tunnels, roughly 17 km plus 0.55 km plus roughly 10 km equals roughly 27 km, so the information provided by the Snowy Hydro 2.0 website is correct.

That would however be a disadvantage for solar/wind or other intermittent power sources. Solar and wind energy are low density power sources and therefor need large installations requiring large surfaces and their intermittency results in the need for the strengthening of the grid. The transmission upgrade cost for solar and wind projects will therefor intrinsically be higher than the transmission upgrade of projects at a central location. In this case, the Snowy Hydro 2.0 is just the expansion of an existing project.

Snowy 2.0 will provide an additional 2,000 megawatts of dispatchable, on-demand generating capacity and approximately 350,000 megawatt hours of large-scale storage to the National Electricity Market. To provide context, this is enough energy to power three million homes over the course of a week.

He objects to the 350,000 MWh (= 350 GWh) figure in the first sentence. Brakels claims that this number is not the full story. He accepts that, when the upper reservoir is full, there is enough water to provide that amount of energy, but not during normal operation. Therefor the working amount of storage will be much less. He supports his claim by stating that the upper reservoir is much larger than the lower reservoir, meaning that all the water of a full upper reservoir could not fit in the lower reservoir. Also, the lower reservoir would be mostly full anyway, so under normal operation this 350 GWh could never happen. According to Brakels, 40 GWh would be a better estimate of the storage capacity.
He links to this paper for more details. This paper indeed also accepted that Snowy 2.0 might have an energy reserve of up to 350 GWh, but it contends that it would rarely, if ever, be called upon to deliver that amount of energy at once. It then would also take a long time before the reservoir is refilled and able to generating electricity again. According to their calculations, the recyclable storage capacity could vary between about 40 GWh and 200 GWh, depending on the operation of other reservoirs. The storage capacity could go beyond 200 GWh, but then water would be lost by discharging to a lower reservoir and is therefor not recyclable.

Until that point in the article, it is not clear why Brakels needs the storage capacity of the Snowy Hydro 2.0 lowered. That will become clear in his calculations, but that will be for the next post.