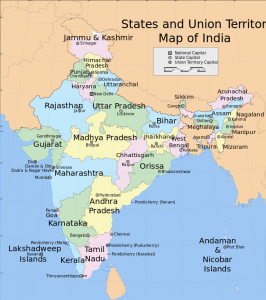 Something amazing has happened in Uttar Pradesh.

At the end of April in Uttar Pradesh, every day 35,000 people were catching Covid  and 350 people were dying. With a population of 240 million people living in high density conditions, and with only 5% vaccinated, all the odds were against it.

This week across the whole state there were only 199 active cases in toto and a trickle of new daily cases.

Ponder that Utter Pradesh has about two thirds of the population of the USA and they’re living in a high density environment with a GDP of about $1,000 per capita, which is one sixtieth as much as the average American.  To add some perspective, it was only three years ago that the government finally connected everyone up to electricity.

People may not realize that Ivermectin is not only useful in treating Covid but can also reduce viral loads and thus transmission if it is used early enough. We could be using it to ring-fence Covid — to keep people out of hospital, reduce the need to lockdown, and end lockdowns sooner.

Given the safety of ivermectin, why aren’t we doing those trials? Even if ivermectin only shortened the infectious period by a few days, it could not only save lives but billions of dollars? What have we got to lose?

If the Minister of Health says “Trust us” on the vaccines, but isn’t acting as though our health was the most important thing. It it was, he’d be allowing doctors to prescribe it to patients and running trials.

There are no active cases of the coronavirus disease (Covid-19) in 33 districts of Uttar Pradesh, the state government informed on Friday. About 67 districts have not reported a single new case of the viral infection in the last 24 hours, the government said, noting the steady improvement of the Covid-19 situation in the state.

Overall, the state has a total of 199 active cases, while the positivity rate came down to less than 0.01 per cent. The recovery rate, meanwhile, has improved to 98.7 per cent. As per the state’s health bulletin, Uttar Pradesh reported only 11 new Covid-19 cases and zero deaths in the last 24 hours.

It’s always hard to know if places like India are testing enough, and while they definitely weren’t at the peak, they appear to be now. Test positivity in India rose to 15% or more in late April, but by early June was as low as 0.5%.

A test positivity of 15% is pretty bad, but plenty of US states have had similar days.

Uttar Pradesh is giving people ivermectin, and not only providing it to those who test positive but giving it to everyone else in their house as well to prevent or at least slow the transmission.

Uttar Pradesh has a policy of treating ALL the contacts of an infected patient prophylactically with Ivermectin.  In other words, in Uttar Pradesh, everyone in the house gets Ivermectin treatment even if only one is infected. Ivermectin is known to reduce mortality in infected and dramatically lowers the viral load, thereby helping reduce the spread of the virus to others.

“Uttar Pradesh was the first state in the country to introduce large-scale prophylactic and therapeutic use of Ivermectin. In May-June 2020, a team at Agra led by Dr. Anshul Pareek, administered Ivermectin to all RRT team members in the district on an experimental basis. It was observed that NONE OF THEM developed COVID-19 despite being in daily contact with patients who had tested positive for the virus,” Uttar Pradesh State Surveillance Officer Vikssendu Agrawal said.

The WHO raved about the way Uttar Pradesh was handling things, but didn’t mention what was in the medicine bag. It’s just some mysterious black box, right?

We can see how comprehensive the program was beginning on May 5th:

Government teams are moving across 97,941 villages in 75 districts over five days for this activity, which began on 5 May in India’s most populous state with a population of 230 million.

Each monitoring team has two members, who visit homes in villages and remote hamlets to test everyone with symptoms of COVID-19 using Rapid Antigen Tests (RAT) kits. Those who test positive are quickly isolated and given a medicine kit with advice on disease management.

The Uttar Pradesh government certainly thinks it was ivermectin:

“Uttar Pradesh was the first state in the country to introduce large-scale prophylactic and therapeutic use of Ivermectin. In May-June 2020, a team at Agra, led by Dr Anshul Pareek, administered Ivermectin to all RRT team members in the district on an experimental basis. It was observed that none of them developed Covid-19 despite being in daily contact with patients who had tested positive for the virus,” Uttar Pradesh State Surveillance Officer Vikssendu Agrawal said.

He said that apart from aggressive contact tracing and surveillance, the lower positivity and fatality rates may be attributed to the large-scale use of Ivermectin use in the state, adding that the drug has recently been introduced in the National Protocol for Covid treatment and management.

Compare Uttar Pradesh to the small state of Kerala on the far southern edge of India. Kerala was using ivermectin, but unlike Uttar Pradesh, it increased vaccinations and decreased ivermectin.  By early August ivermectin was no longer included in treatment plans. Kerala has a population of 34 million, but currently has about two thirds of all new cases in India.

See the guidelines: Kerala treatment Guidelines April 2021 and August 2021.  There are 13 mentions of ivermectin in April, but by August, there are only 2, and they are “contraindications”. 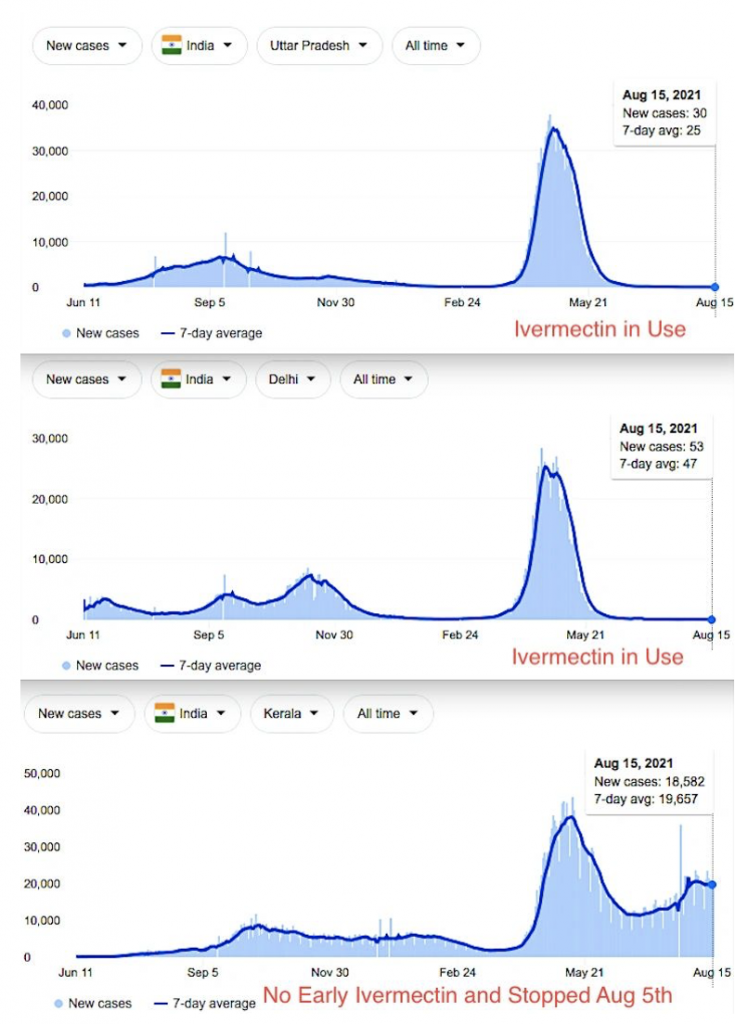 Indeed there is a similar caseload in Uttar Pradesh as there is in New Zealand:

Though it has to be said, there’s a lot more natural immunity now in India but there were a lot more deaths.

Graph thanks to the great Juan Chamie

h/t Craig Kelly, Scott of the Pacific, and ColA on Thursday Unthreaded plus Bill in AZ

Be wary of drawing too much from just these single variable graphs alone. Other places show a rise and fall in cases, though few reduce a large caseload to virtally nothing. The details matter, like the timing, how much testing was done, whether there was also a lockdown and whether the ivermectin was available easily. The total number of cases and deaths matters too.

2 thoughts on “Uttar Pradesh, India, wipes out Covid with ivermectin”