Hot off the press from GWPF: 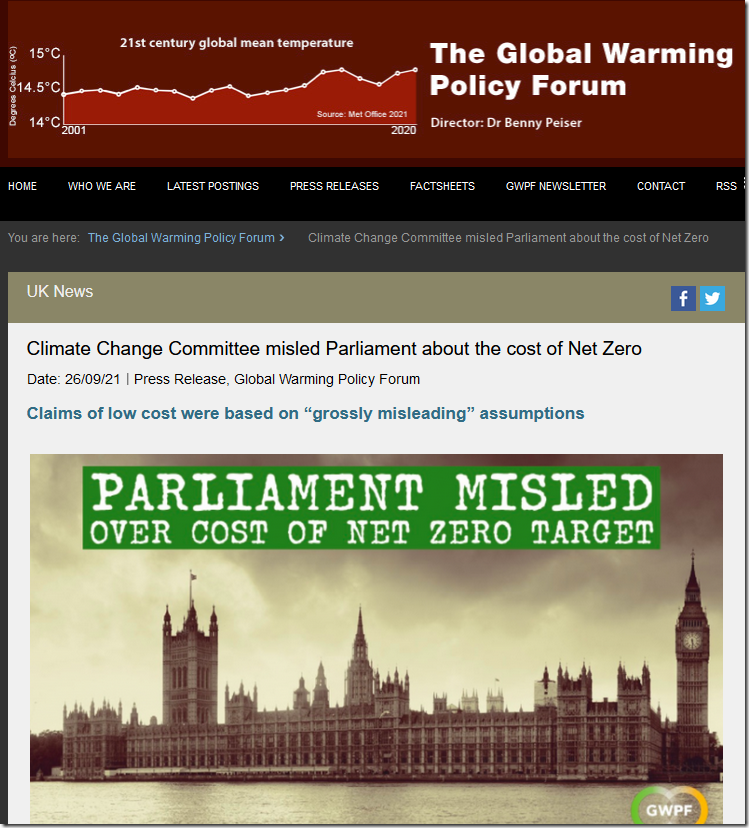 * Costs could be £60,000 per household higher than the CCC estimates that MPs used when they were considering Net Zero legislation

London, 26 September – The Sunday Telegraph reports today that Parliament was misled into supporting Net Zero plans to decarbonise the economy.

The Climate Change Committee (CCC) told MPs that British households and businesses would face only a modest cost for reaching Net Zero emissions in 2050, but analysis of their financial models by the Global Warming Policy Forum (GWPF) shows that key assumptions were not credible even at the time the report was published.

The revelations come after the CCC spent two years and tens of thousands of pounds resisting attempts to have the Net Zero model spreadsheets released under Freedom of Information legislation. The Information Tribunal finally forced their disclosure in August this year.

The first results of the GWPF’s analysis focus on the Transport sector costings. The work reveals that the CCC’s claims that decarbonisation could be achieved at no net cost was based on wildly optimistic and sometimes bizarre assumptions.

If instead of the CCC’s optimistic assumptions, we project a realistic decline in EV costs, this adds a staggering £1.8 trillion to the cost of Net Zero, or £60,000 per household, and altogether wipes out the claimed net benefit of decarbonising the transport sector.

Lord Deben, chairman of the Climate Change Committee, told Parliament the Net Zero report was ‘the most seriously presented, costed effort’ – but it is now clear that the CCC’s costings were incomplete, biased, and grossly misleading.

Parliament was, in essence, misled and Net Zero was badly mis-sold. The public is now facing the price for that deception.”

In a striking new development, the Sunday Telegraph is also reporting that they were initially given misleading information by the CCC, in an attempt to cover up the error and prevent publication. Only repeated requests for clarification revealed the truth.

Dr Peiser said that the CCC’s attempts to whitewash the matter meant that this supposedly independent advisor to government could no longer be seen as a credible source:

The CCC spent years trying to hide their absurd assumptions, and even after the Information Tribunal compelled them to release their spreadsheets, they tried to throw the Sunday Telegraph off the scent. I don’t think Parliament or the public can ever trust them again.”

Craig Mackinlay MP, chairman of the parliamentary Net Zero Scrutiny Group, told the Sunday Telegraph that the findings were “scandalous” and that Parliament had been “misled”.

The GWPF’s analysis of the CCC’s costings is ongoing, and further announcements are expected in the coming weeks.

It must have been obvious to the CCC that their assumed trajectory was wrong at the time the Net Zero report was published. The CCC’s 2019 figure was £14,666, around half the level seen in the marketplace at that time [1].

This can be illustrated by the history of the Nissan Leaf, the archetypal small EV. The extremely optimistic assumptions made by the CCC about Electric Vehicles are crucially important to their overall cost estimates. Simply changing the shape of the curve to a straight line decline between 2019 and 2050, for all categories of EV, adds £0.7 trillion to the cost of Net Zero.

With batteries now representing only around 25% of the consumer cost of an EV, future cost declines – if any – are likely to be incremental rather than revolutionary. Indeed, there a significant upward cost pressures on EV prices due to increasing costs for energy and critical minerals.

Reducing the rate of decline to 3% per decade more than doubles the cost of Net Zero, amounting to a bill of £60,000 per household. Holding EV prices steady would increase the bill by £2.1 trillion, or £75,000 per household.

The encouraging news is that the Sunday Telegraph has gone heavily into this story, courtesy of Edward Malnick, the Political Editor, rather than that soppy Environmental Editor.

Below is the extract regarding how the CCC tried to mislead the Telegraph:

Following a legal battle, the GWPF, founded by Lord Lawson, the former chancellor, obtained the spreadsheet containing the assumptions on which the body’s calculations were based.

When The Sunday Telegraph questioned the Committee about the disparity, it initially claimed that the 2019 figures related to cars with small batteries, rather than small cars, despite the fact that the spreadsheet containing the modelling refers to “small cars”.

The CCC claimed that the vehicles “class[ed] as small by battery size” are no longer sold and therefore cannot be compared to small cars currently on the market. The claim was echoed by the Department for Business, Energy and Industrial Strategy (BEIS), which also said that some smaller electric vehicles cost as little as £16,000.

It then claimed that the £13,000 figure was a “social cost” which excluded any additional tax, subsidies or "increased profit taken by manufacturers” compared to costs attached to conventional cars – but admitted that manufacturers are only now “beginning to see profits” on electric vehicles.

With a VAT bill of approximately £2,600 and the Government’s Plug in Vehicle Grant providing a £2,500 saving for drivers, the impact of VAT and the subsidy would simply add £100 to the £13,000 figure.