Europeans are going to get a strong dose of energy cuts Greta has long called for since starting her Fridays for the Future.  Shortages of fossil fuels are in the outlook and already reflected in skyrocketing prices. Tyler Durden explains at zerohedge All Hell Is Breaking Loose In Energy Markets.  Excerpts in italics with my bolds.

By now readers are well aware that Europe is suffering from a historic gas crisis, one which according to Rabobank is now even more extreme than the US oil price shock. 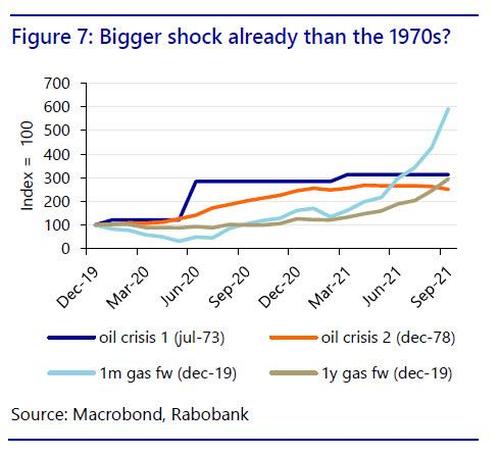 And unfortunately for Europe’s population, with every passing day – and to a lesser extent hedge funds such as Statar Capital which suffered a big loss in the past few days – it’s only getting worse. As Bloomberg’s Javier Blas notes today, both UK NBP and Dutch TTF natural gas benchmarks have closed the day at their highest ever settlement level, up ~11% on the day (to a closing price equal to more than $26 per mBtu). 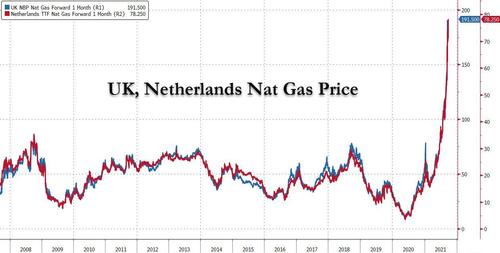 Natural gas prices in Europe have surged past $25 per million British thermal unit, more than 400% higher than the 2010-2020 average, and significantly higher than in the U.S., where the commodity trades at around $5 per million Btu. In Asia, liquefied natural gas has recently changed hands at around $27 per million Btu, a seasonal record high, as China has also been hit by a widespread energy crisis (see “Millions Of Chinese Residents Lose Power After Widespread, “Unexpected” Blackouts; Power Company Warns This Is “New Normal””). Also, for those who haven’t read it yet, please check out Rabobank’s extensive recap of Europe’s energy crisis which we posted over the weekend.

Europe’s energy crisis is not contained to nat gas, and as we discussed over the weekend in another flashback to the 1970s US, UK gas station pumps are running dry in British cities on Monday with vendors rationing sales as a shortage of truckers strained supply chains to breaking point. Pumps across British cities were either closed or had signs saying fuel was unavailable on Monday, Reuters reporters said, with some limiting the amount of fuel each customer could buy.

The Petrol Retailers Association (PRA), which represents independent fuel retailers accounting for 65% of all the 8,380 UK forecourts, said members had reported that 50% to 90% of pumps were dry in some areas.

A post-Brexit shortage of truck drivers as the COVID-19 pandemic eases has sown chaos through British supply chains in everything from food to fuel, raising the specter of disruptions and price rises in the run-up to Christmas. Drivers lined up for hours to fill their cars at petrol stations that were still selling fuel, albeit often rationed. There were also calls for National Health Service (NHS) staff and other emergency workers to be given priority.

Hauliers, gas stations and retailers said there were no quick fixes as the shortfall of truck drivers – estimated to be around 100,000 – was so acute, and because transporting fuel demands additional training and licensing. “We need some calm,” Gordon Balmer, executive director of the PRA, told Reuters. “Please don’t panic buy: if people drain the network then it becomes a self-fulfilling prophecy.”

Shifting from gasoline and nat gas to oil, the near-term outlook is looking even more grim. According to Trafigura, one of the world’s largest commodity trading houses, the world faces higher oil and gas prices this winter and beyond as supply struggles to catch up with fast-rising demand.

Luckock said the market was mispricing forward oil contracts for the next couple of years because traders hadn’t yet woken up to the fact the supply-demand balance will remain tight for some time. Translation: even higher prices are coming with no easing in sight.

“I struggle to see anything but higher prices going forward in the next two years,” he said, one day after Goldman hiked its price target, now predicting that Brent would hit $90 some time in December. On Monday, Brent crude for immediate delivery surged toward $80 a barrel, setting its highest price in nearly three years.

On natural gas, he said prices could shoot up even more this winter if cold weather forces demand higher in Europe and Asia.

The bullish outlook comes as oil demand fast recovers toward its pre-pandemic level, with most traders expecting that consumption will reach the 2019 by early-to-mid 2022. As demand rebounds, supply has struggled to keep up: U.S. shale companies have kept a lid on spending, preferring to pay dividends to shareholders. With U.S. shale reacting slowly to higher prices, the OPEC+ oil cartel has been able to keep control of the market.

“The U.S. shale industry is showing very strong discipline. Oil prices are roughly double what they were a year ago and despite that we’re not seeing a huge increase in drilling,” Luckock said.

Luckock said that it was difficult to see lower natural gas prices this winter in Europe, despite the commodity trading at a record high already: “If it’s a cold winter in Europe or Asia, we have a big problem,” he said. “If it’s cold, and on top, it isn’t windy, then we have a much bigger problem. We will face shortages.”

Notably, Luckock said he was skeptical that Russia, the biggest gas supplier to Europe, was intentionally tightening the market for political gain, suggesting that Moscow was already pumping as much gas as it could right now.

“It’s easy to say that’s politically motivated, but I think it’s simpler than that: Russia is facing maintenance in many gas fields, very low domestic inventories, substantially increased flows to Turkey, and Gazprom is struggling to increase production,” he said.