But it is just in time for a reality check on COP26.

Europe’s energy crunch is continuing, as gas storage volumes have shrunk to 10-year lows. In the UK 12 energy companies have collapsed this year leaving 2.2 million customers stranded without an electricity provider.  Things are so bad the Dutch government is thinking of reopening the Groningen gas field, Europe’s largest onshore gas field.  “Until recently, the plan was that Groningen would be closed completely by 2023, ending the large-scale gas production and export by the Netherlands with a bang.” So much for that big Green party.  There are even thoughts of switching back to coal. Drax is suddenly talking about keeping some coal plants running a bit longer, something that would have been blasphemy a few months ago.

Across Europe and Asia — the energy crisis runs amok

No one can blame Brexit for food shortages in Brussels: 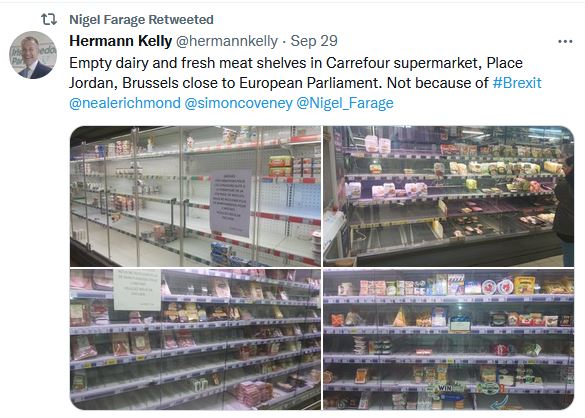 But people can blame Green policies for energy pain

Unlike the unexpected, airborne virus that swept across the world at rapid pace, there is virtually no excuse for the Government not being fully prepared for what we’re experiencing now.

Britons are soon to pay the price. Even in the better-case scenarios, where gas supplies are ramped up and demand from Asian markets (who are paying big bucks to secure first priority) levels out, energy bills are now all but guaranteed to spike in the coming months.

For all the lofty promises made by successive governments to protect consumers from rising costs, it’s now being unveiled – in a financially painful way – just how empty such promises are, in the face of uncontrollable global pressures.

Yes, UK residents will be joining people worldwide paying higher energy prices. But the problem will be especially acute here, where gas reserves are merely several days’ worth, making Britain especially vulnerable in the case of shortages.

The decision not to push on with lower-carbon shale gas alternatives means looming fears of a 1970s-style energy crisis; whereas countries like the US are, for now anyway, fairly confident they can handle the spike.

Perhaps it’s dawning on officials why the Kremlin supported anti-fracking protests in Europe. Undermining the imperfect but far cleaner form of energy through disinformation campaigns wasn’t just about keeping its hold on gas supply (which it’s using to its advantage now, to try to push through Nord Stream 2). It was also a game of stability and security – one which the UK seems to be losing.

Meanwhile the UK Government is thinking of slapping a tax on people using gas to heat their homes in cold weather supposedly to save them from some slightly hotter days in 2095.  As John Constable says at the GWPF, the proposed heating tax to fund Net Zero is a social and political disaster in the making. Let’s take high gas prices and make them even higher?

Meanwhile in China two thirds of the nation is rationing power

Right now in China there are reports that in some areas the lifts are not working, heating is off, and traffic lights are out.  Chinese thermal coal futures have more than doubled in price in the past year and there are 242 container ships waiting for a spot to berth in Chinese ports.

Two-thirds of China’s provinces are now rationing power. Factories have closed or have reduced production. Households are going dark and street lights have been turned off. Demand for candles has soared. The impact on food processors is creating a threat to food security.

Heading into a winter that is typically extremely cold, China is facing threats to its people and its economy …

Nearly 60 per cent of China’s power is generated by coal, with about 90 per cent of that coal sourced domestically.

It was coal that powered China’s remarkable acceleration in economic growth over the past half century, which helped turn it into the world’s manufacturing base and which fuelled the decades-long construction and property booms at the heart of its domestic economy.

There is a supply chain crisis brewing too: 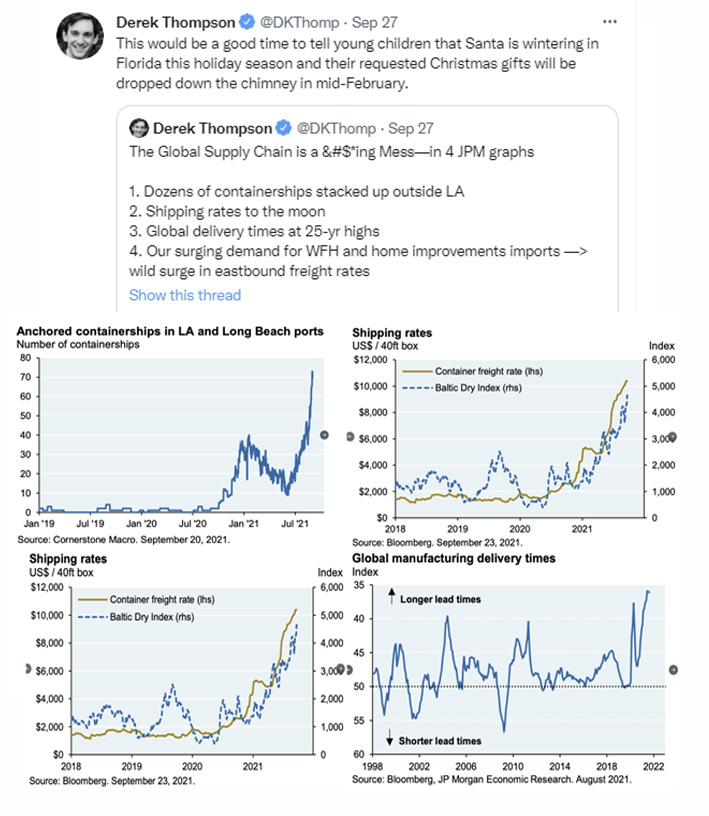 To see those graphs up close.

China used to import $14 billion dollars worth of coal from Australia. Then Australia asked for an investigation into the origin of Covid-19 and the communist party launched a trade war which left some 70 container ships with 1,400 crew languishing for months off China. There are suggestions China may only have a couple of weeks of coal stockpiled. People are wondering if the  latest Chinese power cuts could force it to import Australian coal again before the winter chill really strikes.