The sun has just risen on South Pole after the coldest six month period on record since 1956. The last winter there was suddenly 2.2 degrees Celsius colder than the average for the last 30 years. 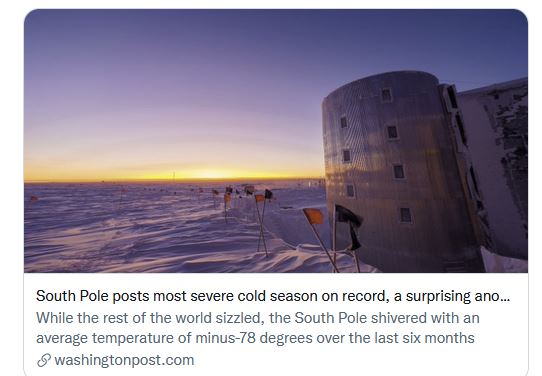 The chill was exceptional, even for the coldest location on the planet.

The average temperature at the Amundsen–Scott South Pole Station between April and September, a frigid minus-78 degrees (minus-61 Celsius), was the coldest on record, dating back to 1957. This was 4.5 degrees lower than the most recent 30-year average at this remote station, which is operated by United States Antarctic Program and administered by the National Science Foundation.

One hot weekend in Miami is Climate change but the coldest six months in Antarctic records is a blip:

While impressive and unexpected, scientists characterized this record as a mere blip and curiosity as both Antarctica and the planet continue to rapidly warm amid escalating extreme weather.

Cooling for a thousand years.

Climate change has been making Antarctic summers cooler too. Blips are everywhere. 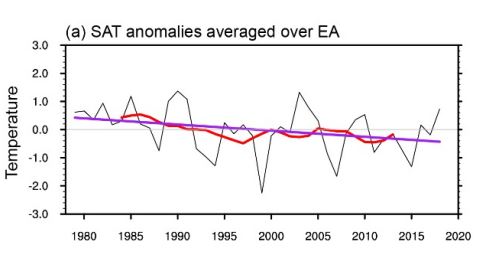 And the ocean around Antarctica is cooler too:

The extreme cold over Antarctica helped push sea ice levels surrounding the continent to their fifth-highest level on record in August, according to the National Snow and Ice Data Center.

As usual, scientists didn’t predict the record cold — but they knew why it happened:

“Basically, the winds in the polar stratosphere have been stronger than normal, which is associated with shifting the jet stream toward the pole,” Amy Butler, an atmospheric scientist at NOAA, wrote in a message. “This keeps the cold air locked up over much of Antarctica.”

No climate story is complete without the cult litany:

Scientists stressed that the record cold over the South Pole in no way refutes or lessens the seriousness of global warming. Antarctica is notorious for its wild swings in weather and climate, which can run counter to global trends.

At minus 60C even the planes don’t go:

Matthew Lazzara, Antarctic scientist said “At these temperatures, it is difficult to operate aircraft,” he wrote in an email. “[B]etween -50°C and -58°C you put the aircraft at risk with the hydraulics freezing up or fuel turning into a jelly.”