China and India are building coal-fired and nuclear power plants, hand over fist. Neither of them has any interest in signing up to the latest suicidal energy policies being promoted by a bunch of cynical, rent-seeking elites; pitched as the last chance to save the planet from imminent incineration.

High on emotive rhetoric, and low on science, logic and reason, the net-zero carbon dioxide emissions mantra is all about empowering financial wiz kids and billionaires to make even more money at the expense of the working and aspirational classes. Gouging more subsidies and clipping ‘carbon’ tickets is the order of the day for a group of people who produce nothing but unwarranted fear and anxiety.

Australia, once an energy superpower, has done everything possible to destroy its cheap energy advantage; and, with it, tens of thousands of manufacturing and mineral processing jobs.

At a moment when its economy is on the skids (a raft of Draconian restrictions imposed to hold back the coronavirus tide have killed thousands of small businesses, never to return), it would be reasonable to think that what passes as political leadership in this country might reverse the trend.

But, the PM, Scott Morrison has given every indication that he has joined forces with the global corporate elite, who plan to profit even more handsomely by the further expansion of the Climate Industrial Complex.

For our international followers, Morrison is the leader of the Liberals – a once notionally conservative party – that backed families, small business and small government. Now, under Morrison, it’s indistinguishable from the big government, interventionist and increasingly authoritarian Labor Party.

The latest word is that Morrison will bundle off to the upcoming Glasgow climate shindig and join a band of other Western nations ready to commit economic suicide and crush their working poor, with unaffordable and unreliable electricity.

The fact that Morrison has embraced the very policies championed by the hard-green-left in the run-up to the May 2019 Federal election – the very same policies pitched by the ALP that gave Morrison victory then – has incensed the Liberal base; a growing number of the members of his Coalition partner, the Nationals have all but declared war on Morrison and his policies.

Morrison’s failure to fight for reliable and affordable energy (and the jobs and prosperity they inevitably bring) will cost him government. Electors will not take kindly to a party which has consigned them to increasing economic misery, with no conceivable benefit being offered in exchange. Net-zero is being championed by corporate elites because it represents an opportunity for them to profit at the expense of everybody else; which is precisely what heavily subsidised and chaotically intermittent renewable energy is all about. And net-zero is all about expanding and extending those subsidies for unreliable wind and solar, until kingdom come.

How can something be dead wrong two years ago – in the words of Scott Morrison, “a reckless target … (that) will come at a tremendous cost to Australians” – but now be absolutely right?

This is the obvious question the Prime Minister knows he must answer if he expects to win quiet Australians over to a climate policy requiring higher targets, deeper cuts and billions more in taxpayer expenditure than ever proposed by his predecessors, Kevin Rudd, Julia Gillard, Tony Abbott and Malcolm Turnbull.

But it isn’t just politicians in the hot seat; so are corporate leaders following a backflip from the Business Council of Australia. The BCA slammed Bill Shorten’s 2019 election plan for a 45 per cent emissions cut by 2030 as “economy wrecking” but now demands a 45 to 50 per cent cut by 2030. It is urging the Morrison government to commit immediately to net-zero emissions by 2050.

The BCA, representing Australia’s 100 or so biggest companies, claims “circumstances have changed” since then. Wrong. All that has changed is the politics.

US President Joe Biden is a climate warrior while British Prime Minister Boris Johnson is desperate for a diplomatic triumph at next month’s Glasgow climate conference. There are concerns Morrison may be asked to pay a blood price for the nuclear-powered subs deal.

The BCA’s about-face is being hailed as a free pass enabling the Morrison government to change its position without having to worry about the economic consequences of more drastic emissions cuts or political blowback. As if.

The BCA paper is shallow boosterism that should shame an organisation that led the intellectual charge for the economic reforms of the Hawke and Howard eras, and still was making good economic and political sense a decade back. It cites Deloitte Access Economics modelling purporting to show that achieving net zero by 2050 will provide a $890bn boost to the economy and 195,000 extra jobs by 2070.

Let’s pass over the implausibility of being able to model anything with precision 50 years hence. Unsur­prisingly, the working papers for this modelling are not published; what is said, though, is that it’s based on “avoided warming damages to the economy” plus the “benefits of low-cost renewable electricity production”. That would be the ostensible benefits Britain is experiencing as a result of relying on renewables for up to 40 per cent of its power.

As Energy Minister Angus Taylor said this week, “reliance on gas imports … and a prolonged wind drought have plunged (the UK) into an extraordinary energy crisis”. He also said: “The UK’s energy crisis has literally stopped industry in its tracks. Jobs are uncertain, production of critical outputs has been paused (and) bills have skyrocketed.”

But none of this bothers the BCA or, so it would now seem, the Morrison Liberals. That’s because, as the BCA claims, technological change, especially “green hydrogen” – or hydrogen produced using renewable energy – is going to drive our reliance on fossil fuels (mainly coal) for about 70 per cent of our electricity to under 15 per within a decade.

This is notwithstanding the cav­eat from the International Energy Agency – effectively explod­ing the premise of the BCA report – that “reaching net-zero emissions will require the widespread use after 2030 of technologies that are still under development”. The IEA says: “In 2050, almost 50 per cent of CO2 emissions reductions … come from technologies currently at demonstration or prototype stage.”

In other words, Australia is being asked to jeopardise affordable and reliable fossil-fuel-based power now in the hope something will be developed to replace it sometime in the future, demanding a leap into the dark. This is economically irresponsible but politically it’s also almost bewilderingly stupid.

But it won’t be long-gone boards and chief executives that will pay the price but the Coalition and, in real terms, the small business sector (which can’t survive passing on every climate cost to consumers) and households on low and fixed incomes.

It is building as an almost perfect storm for Morrison; and it’s far more than just a party-room showdown between “modern Liberals” from rich, Tesla-driving electorates in the leafy suburbs and the disparaged but politically astute redneck Nationals representing coalminers and the poorer regional seats.

If it were, it might be fixable by another round of rural pork-barrelling or, better, by opening some new low-emission coal-fired power plants to keep power affordable and reliable while transitioning to nuclear power in coming decades. At least that would mean Morrison’s fight is with the Labor Party rather than within his own team.

Instead, there’s something far more important at stake here. Politicians with elastic principles and no conceivable convictions are what drive our despair about public life. Apart from a bedrock preference for freedom and a commitment to budget responsibility (both of which have been tested almost to destruction by this pandemic), this government was elected to end Labor’s emissions obsession.

Indeed, even before that, Rudd’s flawed carbon pollution reduction scheme, which Turnbull crossed the floor to vote for, only hastened Rudd’s demise. Gillard just limped over the line when she promised “no carbon tax under a government I lead”. Breaking this promise helped to secure Abbott’s landslide win when he vowed to repeal it. In 2016, Turnbull narrowly survived losing 14 seats because the Nationals kept his green-left zealotry at bay. When it came back again in 2018, the party room handed his job to Morrison, who won a miracle victory in 2019 by standing firm against Shorten’s uncosted emissions policy.

That’s the political reality of the past 20 years in terms of real votes cast at real elections, not opinion polls with loaded questions designed to build climate crisis drama in the media. That Australians care about the environment is not the issue; they do, and our country has an extraordinary record of conservation.

But net zero by 2050 isn’t just an environmental issue. It’s an economic and national security issue, too. That is what’s at stake against a background of global capital rent-seekers – the billionaires, bankers and big corporates, all desperate for another way to make money by way of global taxpayer trillions and consumers bearing the brunt of soaring costs for life’s essentials.

It is not a question of should we protect our environment, that’s a given; it’s how we do it that’s the issue. Making our nation poorer and our energy security more precarious at one of the most volatile times in our history defies sense.

This is a government with no seats to spare, seeking a fourth term on a thin record, that has all but exhausted the goodwill of its natural supporters. By continually ruling out nuclear power Morrison has brought many to the point of no return. Leaders lead, and followers head to Glasgow.
The Australian 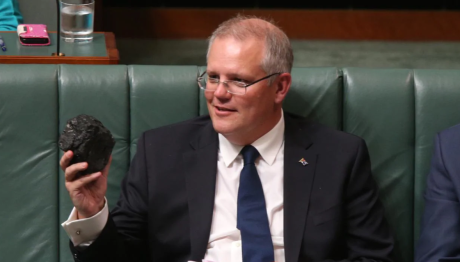 Morrison & reliable energy source: back when the PM deserved to govern.