Perhaps the government should have been listening to the experts instead of the Committee on Climate Change!

Having started my working life as an apprentice plumber aged 16, run my own building company for almost 30 years and then appeared as an expert on TV shows from the BBC’s Rogue Traders to House Of Horrors on ITV, I thought I’d seen it all when it came to the building trade.

But even I have been unprepared by the scale of opposition to the heat pumps that the Government is so keen to make us all fit in our homes, having ripped out our gas boilers first.

On the building advice website that I now run, I have been deluged by unhappy customers who were persuaded to install heat pumps (which are either ground source or air source, depending on design) but who bitterly regretted their decision.

One told me that he bought a new-build house which had an air source heat pump installed.

The customer’s bills were similar to those from the gas boilers they had before: But now they pay an extra £450 a year for service and maintenance if something goes wrong – as it frequently does.

Another contact of mine in the trade told me of a customer north of the border who had a ground source heat pump installed thanks to a Scottish government grant. He said it had never worked.

Contractors had dug up his garden three times to refit various components. Eventually he gave up altogether, dismantled it, installed solar panels – and now relies on his old oil boiler during the winter.

And for these reasons, along with all my extensive experience in the trade, I know that the Government’s new scheme to offer £5,000 grants to householders to install heat pumps is doomed to fail.

Yes, it’s vital that we reduce the environmental impact of buildings. But in British homes, heat pumps are not the answer. 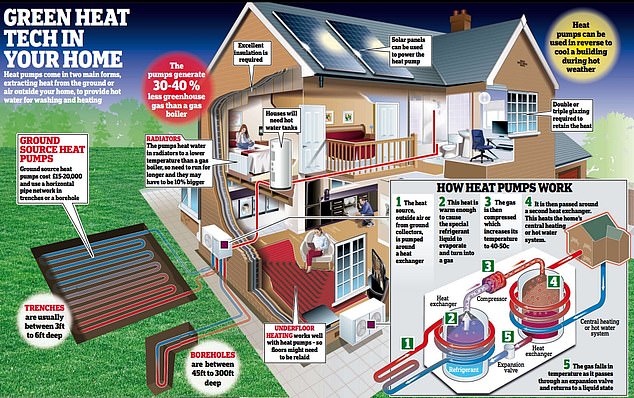 I know that the Government’s new scheme to offer £5,000 grants to householders to install heat pumps is doomed to fail

Let me be clear: I’d be the first person to take out my old gas boiler and install a heat pump if I knew it would be an improvement.

But it wouldn’t and – unless you live in an unusually well-insulated and modern home, perhaps in a rural area – nor will it be the right decision for you.

Air source heat pumps, which sit on patios or external walls, look like metal boxes with large fans inside – and like all fans, they make a bit of a noise when they’re switched on.

They have been around for years on the continent – especially in Scandinavia, where houses are better insulated than they are in Britain.

If they worked well, they would not need a government grant to bribe householders to fit them.

But they do. Why?

Because far from enjoying cheaper, more efficient heat in their homes, UK families who fit them often find their electricity bills double or treble; the noisy heat pumps drive them to distraction; their house is colder; their shower lukewarm and in all too many cases they wish they could get their old gas boiler back.

Few people seem to realise that it is pointless to install a heat pump unless your house is extremely well-insulated and draught-proofed to keep it airtight. 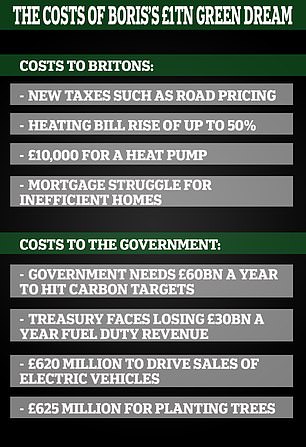 Otherwise, the heat seeps out – and cannot be restored quickly enough by the heat pump.

Gas boilers, in contrast, heat houses very fast – which means that they can replace heat quicker than it seeps out of a house.

Modern new-builds in the UK are generally well -insulated, but they are still not designed for heat pumps.

For older houses, it would typically be better to replace radiators with underfloor heating, which is more efficient and gives a better spread of heat.

But that means taking up floors to install it, meaning more expense, disruption and waste.

As for the £5,000 Government grant, it will barely make a dent in the costs for most people: A new air source heat pump system can cost £10,000 on average including installation.

And you can bet that companies approved to do this grant-aided work will put their prices up – by a remarkably consistent £5,000 or so.

The Government recently ran a pilot scheme outside Newcastle, offering to take out gas boilers and replace them with air source heat pumps for free.

But they couldn’t give the pumps away: People simply didn’t want the disruption.

The great irony is that heat pumps work best when you need them least.

Air source heat pumps operate by taking air from outside and, thanks to a clever design, using this air to warm a compressed gas which is then used to heat your home and its hot water system.

If the outside temperature is above 5C, the heat pump will deliver heat into your home. You will be happy and may even save money.

As the temperature drops to below freezing, however, the heat pump delivers less heat into your home – just when you need it. If your home is heated by a gas boiler, you can realistically expect your hot taps to deliver water at about 60C.

With a heat pump, especially in very cold weather, that might drop to some 40C.

Water at that temperature will only give you a tepid bath – while also increasing the risk of Legionnaires’ Disease, a bacterial lung infection that can kill.

When it’s freezing outside and your heat pump is struggling, your radiators will also feel tepid to the touch.

Unless you want to shiver, you are likely to need another source of heat such as a wood-burning stove – not very environmentally friendly.

So rather than persuading householders to rip up their floorboards, swap out all their radiators with larger ones and commit themselves to a potentially ruinous – and environmentally useless – new heating system, it would be far better to ensure that people’s houses are properly insulated first.

Unfortunately what Roger Bisby omits to mention is that there are no other alternatives which make any sense either. Certainly not hydrogen, which offers the only other low carbon option.

He mentions insulation, as if this was a solution, but does not explain who will pay for it, or why this will eliminate emissions of carbon dioxide.

Instead of meekly accepting that “we must reduce the environmental impact of buildings”, he should be attacking the whole decarbonisation agenda.