A recent volcanic eruption in Spain has led to one solar farm getting buried by a meter of volcanic ash.

As you can imagine, it’ll take awhile and considerable expense to get that facility back online, if at all. 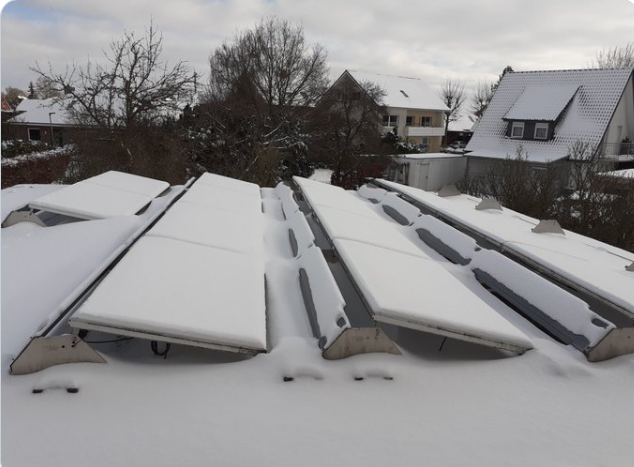 Not surprisingly, volcanic ash has a huge effect on the performance of panels – even when they are located far away from the eruption. This is in addition to problems like darkness, clouds, dust, hail, weeds, snow etc.

The German Helmholtz reported in 2017 on a study looking at the effects of volcanic ash on solar panels:

Volcanic eruptions produce great amounts of ash. The fine particles – often called tephra – can cross oceans affecting regions several hundreds kilometers away. Many Europeans recall, for instance, the eruption of the Eyjafjallajökull (Iceland) in spring 2010. For safety reasons thousands of flights in Europe had to be cancelled. Impacts of tephra fall is a research field that is currently seeing an increase in attention and relevance. If deposited on photovoltaic (PV) modules, volcanic ashes can lead to significant loss in power production as shown in experiments at the GFZ. The eruption of the Eyjafjallajökull (Iceland) in spring 2010 and the subsequent ash cloud travelling to Europe probably resulted in significant power loss of the PV modules, write Edgar Zorn and Thomas Walter from GFZ. “The number of solar panels all over the world is growing rapidly. Given that volcanic eruptions are frequent the risk of negative impacts on this kind of energy production is rising“, says Walter. “This requires close tephra dispersion monitoring and PV maintenance strategies.“

Little is known about the effects of tephra fall on PV-elements. Therefore, Zorn and Walter conducted several experiments in the lab. They mounted lamps over PV-modules, electric current and voltage were recorded constantly. Then they put samples from the latest Eyjafjallajökull eruption on the modules by letting the tephra rain down from above. Fine ash had an even stronger effect on the PV’s power loss than coarser grains as it covered the light sensitive part more efficiently, the team reports in the Journal of Applied Volcanology. The more ash was put on the module the stronger the loss in power was recorded.

Fine ash has a stronger impact

To assess the impact of the 2010 Eyjafjallajökull eruption, data from the experiments were compared to data available from the volcanic event. Roughly 500 million tons of material was thrown into air. About 80% of the erupted material was tephra, only 0.2% reached Europe’s mainland, according to volcanologists’ estimates. Nevertheless, this amount was sufficient to reduce the PV power on the continent, say Zorn and Walter. Their calculations suggest the electrical power generated by PV-modules was reduced by up to 30%. There is evidence that PV-generated power was in fact reduced in the wake of the eruption but empirical data has yet to be investigated. Closer to Iceland, the eruption had the capacity to cause complete failure of all modules within 300 kilometers downwind from the volcano.

“These far-reaching effects are commonly not considered by the renewable energy production industry and may increase hazard exposure“, says Walter. He emphasizes the importance of tephra monitoring and maintenance – which means first of all cleaning – of the PV-installations to get the full power out of it.

But volcanic ash is not the only risk. Desert dust from the Sahara can also travel over far distances. On several days each year, particles from this region are blown to PV-elements in Germany. To investigate the effects, the Karlsruhe Institute of Technology (KIT) started the project “PerduS“. In cooperation with the German Weather Service (DWD) and the forecasting company “meteocontrol” the researchers are currently examining how dust – as haze in the atmosphere and deposited on solar panels – affects the output of photovoltaic systems. The aim is to provide a more reliable forecast for the output of photovoltaic systems through a better prediction of the spread of dust.

As if this “clean source of energy” didn’t have enough problems already.