We’ll spend $120 b because a foreign unaccountable committee says so, but we won’t spend 0.1% of that checking their science 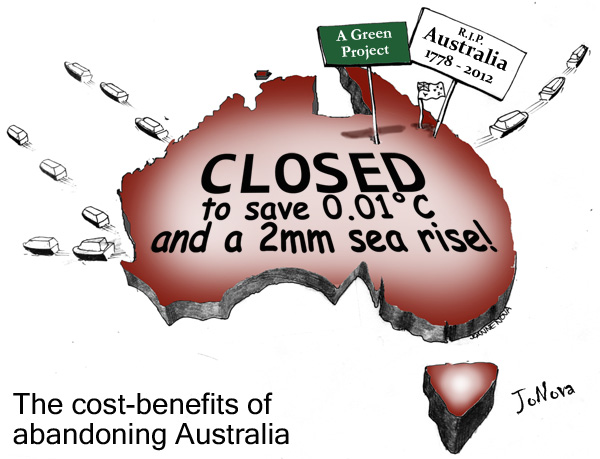 Scott Morrison will spend $120 billion of our money on technology  because it might solve a problem that a foreign unelected, unaudited committee says we need to solve. So we’ll spent $120 billion on a plan to change the weather on Planet Earth. But we won’t spend one thousandth of that to independently check what the committee says. Almost all the climate scientists who support the IPCC decision are ones whose income increases if they find a crisis.

All the people finding flaws are volunteers, or about-to-be.

Scott Morrison has unveiled a “middle path” for Australia to reach net-zero emissions by 2050 which promises dramatic carbon reductions across the electricity and transport sectors and a massive investment of up to $120bn for emerging technologies to help achieve the Glasgow target.

The Prime Minister on Tuesday announced the government’s 126-page plan, promising it would not cause massive job losses and disruption to the regions and that Australians would be better off by $2000 on average by 2050 compared to taking no action.

Make no mistake, no Australian scientist is paid by the government to find holes or errors in the IPCC report

No university gets funding that depends on their success in making better climate predictions with space weather or solar factors and without CO2. No government funded research aims to find out if natural forces are more important than carbon dioxide. No team is offered two week foreign junkets 26 years in a row if they show that CO2 is largely beneficial and irrelevant and the IPCC is a one-sided propaganda tool of President Xi.

The ABC and the Nobel Prize committee are not interviewing people who question the IPCC’s conclusions unless they look like freaks with links to the Klan.

If a hapless researcher finds potential fraud in environmental science, they’re more likely to end up in the High Court themselves than on the 7:30 Report. Ask Peter Ridd whether he got rewarded for finding flaws in the same kind of “reef science” that the IPCC declares is expert research.