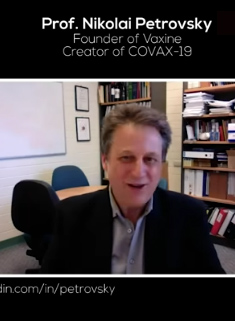 We’re sacking Vaccine Professors for not taking the right vaccine?

Who knew? The first traditional vaccine for Covid that’s based on protein,  has been approved for use. It was designed in Australia, but can’t be used here. The Professor of the team that invented it received no help from the Government, and has just been sacked from Flinders University because he won’t take the mandatory Pfizer, Astra Zenica or Moderna injections. Though he has taken his own vaccine called Covax-19 or Spikogen. It has been approved for use in Iran where Stage 2 and 3 trials were conducted.

Professor Nicolai Petrovsky is hopeful though, that after “the excellent Phase 3 trial results” he will be able to get approval in many countries. But our government-funded TGA won’t consider it until his team pays over $300,000 so they can assess it. You’d never know the Australian government was trying to save Australians lives, or give our citizens more choices. Perhaps it isn’t? If it was interested , it would surely fast track the assessment process and cover the trivial cost. Petrovsky has had to resort to crowdfunding, so they can afford to pay our government to get approval. They have set up a GoFundMe page, which has already raised $290,000 out of the $326,000 already.

public yet. (He’s hoping his papers on that will be accepted so he can). He claims they meet all the FDA and other requirements to be approved. Apparently, in animal tests they find no recoverable virus in challenge tests, which is excellent. They find no transmission to other animals either. He calls the vaccine “quasi sterilizing”. If it’s a lot less leaky, it may even help mop up the nastier mutations we’re probably making by giving millions of people very leaky vaccines. Wouldn’t that be something?

Covax-19 apparently causes few side effects. Petrovsky claims there is no thrombosis, no fever, no myocarditis, and no myocardial infarction. No one needs to take a day off work…

If I understand correctly, despite all these advantages, and it being home-grown, the government told him they couldn’t support a vaccine unless it was manufactured in Australia. But when he approached CSL — the main likely manufacturer in Australia — they flat out refused to even consider it.

But right now, one leaky lab in Wuhan has another 19,000 samples from bat caves to play with. There are plenty of pandemics to pick from. Perhaps for the sake of National Security we need our own vaccination and pharmaceutical manufacturing base? We need supply lines and expertise here. Isn’t Covax-19 the perfect place to start?

Having dedicated his career to creating vaccines, Professor Petrovsky is pro vaccine. But he thinks mandates can’t be justified for something that has little community benefit. He is also astonished at how fast the other vaccines were approved, and questions whether the risk benefit is justified at all for young children. He bemoans the lack of transparency, as do I.

Why o Why are those Pfizer contracts a secret?

A protein vaccine is a simpler creature than the new mRNA vaccines (Pfizer or Moderna). It’s simpler than Astra Zenica too, which is based on using genes inside a common cold virus vector. Novavax is also a protein vaccine (but it is not approved anywhere yet).

Like Novavax, Covax-19 uses a form of the infamous spike protein, but because the protein is made, purified and then injected, each person receives an exact known dose, and there is no need for any genetic material to be introduced inside our cells. There’s little risk of autoimmune disorders, like myocarditis, because the spike isn’t made inside our own cells and isn’t expressed on the surface of them. When healthy cells express the spike, our immune system is more likely to mistake them as a foreign threat which triggers the autoimmune disease.

The adjuvant used is also promising. An adjuvant is designed to wake up our immune systems so they pay attention to something that essentially poses no threat (in theory). In many vaccines the adjuvant is just aluminium hydroxide (would you believe), but Covax-19 doesn’t contain any heavy metals. Petrovsky uses the incredibly safe plant fibre called “inulin” plus a small oligosaccharide (a small odd type of sugar unit).

From the Interview above:

Australians need a choice of treatment, and we need our own vaccine industry.

Greg Hunt, our Minister for Health, is not supporting this. Do Australian lives matter? It is outrageous that CSL is failing the Australian people.  I believe he said Covax-19 was given to 16,000 people in Iran for Phase III Clinical Trials.

The reason the current vaccines are not very useful is because they just don’t reduce the Ro (rate of transmission) enough. Delta has an Ro of 6 – 8, so a reduction of transmission of 20% only reduces an R0 from 6 to 5. The exponential curves won’t be much different.

The  GoFundMe  is nearly there!

*Confusingly there appears to be a UN program called “Covax” which is not the same.

Covax-19 is made and owned by Vaxine.

Photo by Hakan Nural on Unsplash