We’ve looked at the power mix in China, but let’s now focus on India, which accounts for 7% of global carbon dioxide emissions 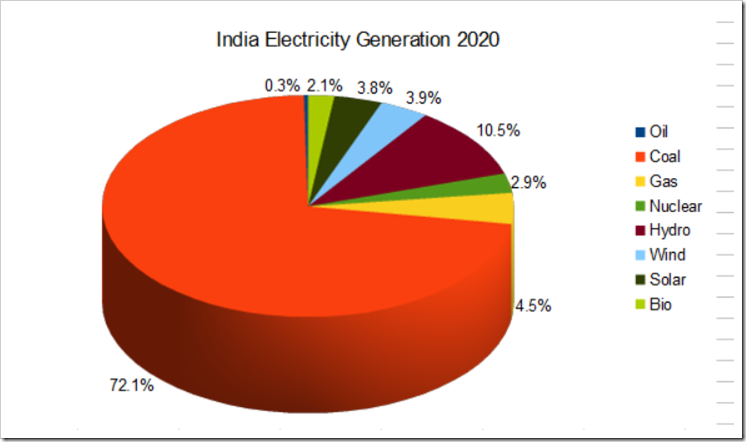 Last year, wind and solar only produced 7.7% of India’s electricity. Coal on the other hand provided 72.1%.

12 GW of new wind and solar capacity have been added in the last 12 months, the equivalent of 16 TWh a year.  However overall electricity consumption has been increasing at a rate of about 60 TWh a year, which means that coal generation will need to supply most of the gap..

This is a similar situation to China, where the construction of wind and solar farms cannot keep up with rising demand.

In FY 2020/21, a further 4.9 GW of thermal capacity (nearly all coal) was added, increasing existing capacity by 2%. This should generate about 30 TWh a year.

However, much more significantly, another 56 GW of thermal plant is currently under construction, which will increase thermal capacity by a quarter:

About 10 GW of this is on track for firing up this FY:

Half of India’s coal power plant is less then ten years old, and two thirds of capacity is super-critical or ultra super-critical technology. Clearly India will want to carry on running these for decades to come.

Premier Modi has pledged net zero by 2070, but this can be considered pie in the sky, given there is no plan as to he can achieve this.